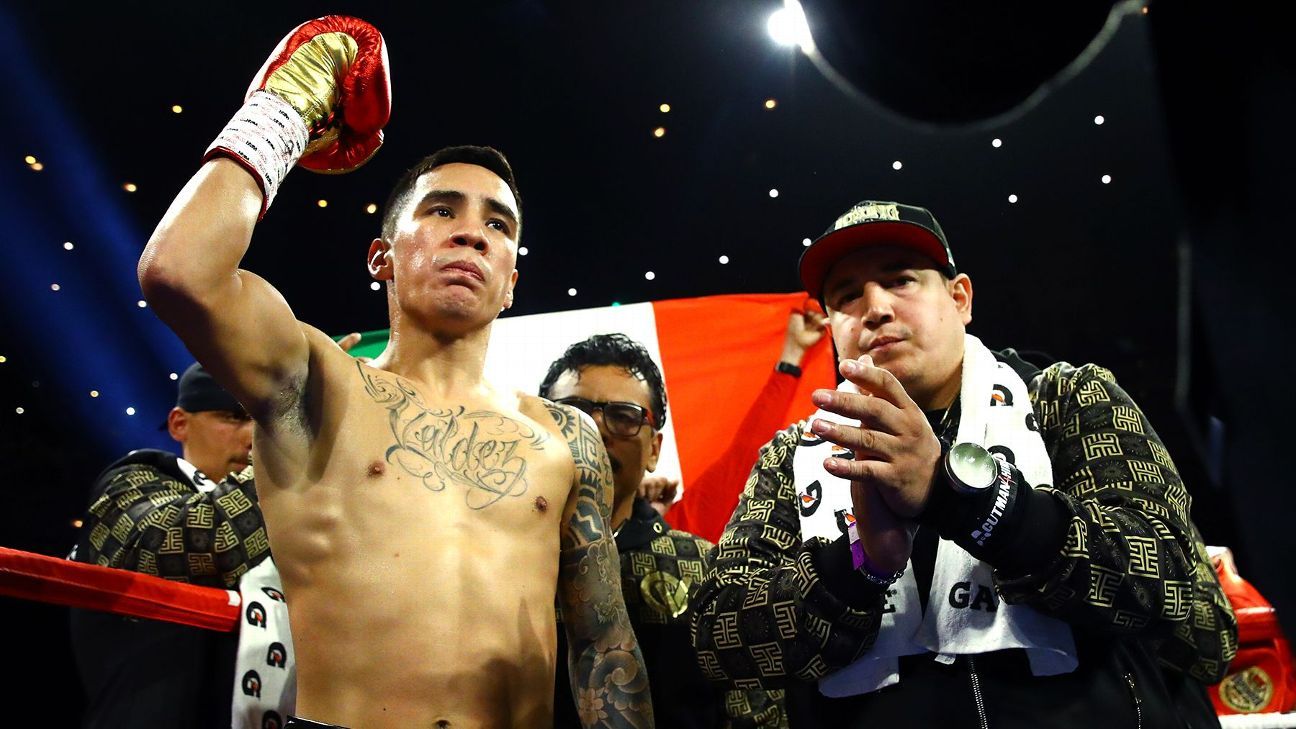 In 2018, both Valdez and Dogboe were riding high as undefeated world champions, seemingly at the peak of their powers. By the end of the year, they weren’t quite the same. Years of hard work can be undone in one night, and every performance for boxers comes at a cost — some more costly than others.

Valdez suffered a fractured jaw in a unanimous decision victory against Scott Quigg (who failed to make the 126-pound limit for that fight) on a cold, wet night in Carson, California. Dogboe was thoroughly defeated by upstart challenger Emanuel Navarrete in a unanimous decision at Madison Square Garden in New York. A rematch with Navarrete only complicated things for Dogboe, as he took a prolonged beating in the late rounds before the fight was mercifully waved off in the 12th.

While the injuries have healed, Valdez said he can’t escape the memory of what he went through.

“I was actually looking at pictures of my injuries and it brought back memories of how painful it was,” Valdez said. “Every time I get a question about it, ‘How was it? How does it feel?’ Well, it felt horrible, it was a lot of pain. The problem wasn’t even the fight. The problem was after the fight I got my mouth wired. I couldn’t eat for two months. So every time I think about that fight, I think about no eating, my mouth wired, my jaw broken and [Quigg] not making weight.

“So it’s a little bit of everything.”

Valdez swears he doesn’t think about the jaw unless the subject is brought up by the media. He has no regrets about going through with the Quigg fight under those circumstances, regardless of the physical toll it took on him.

“I’m a very positive guy. I never look at the negative part of anything,” Valdez said, adding that the fight actually gave him a chance to ”realize how much I love the sport, how much I need to take advantage of my youth and be more disciplined.”

The question still lingers: Did that fight take away a good portion of Valdez’s physical prime? After that bout, he switched trainers, going from Manuel Robles Jr. to Eddy Reynoso. Valdez still holds Robles in high regard — “he’s a great guy and a great trainer” — but his management felt a change was in order. His past three bouts — victories over Carmine Tommasone (TKO7), Jason Sanchez (W12) and Adam Lopez (TKO7) — have drawn mixed reviews.

Valdez believes he is continually improving his relationship with Reynoso, but his November bout against Lopez alarmed many observers, as Valdez was sent to the canvas early in that fight before rallying to score a seventh-round stoppage.

“I was very mad at myself for what happened,” Valdez said of the knockdown. “That’s not Oscar Valdez, that’s a mistake I made, and I’m going to be a better fighter with Jayson Velez, and I’ll prove that to myself.”

Should he get past Velez, a showdown with WBC junior lightweight world titlist Miguel Berchelt awaits. Valdez would probably be the underdog against Berchelt, but that fight could be a good way for Valdez to show that the rumors of his demise are greatly exaggerated.

“I know that, because he’s not just any world champion,” Valdez said. “I’m truly going to face the best 130 out there, with all due respect to the other champions. I have a lot of respect for Jamel Herring, Joseph Diaz Jr. and Rene Alvarado. But I think the toughest one in that division is, without a doubt, ‘Alacran’ Berchelt.

“So to prove to the people and to prove to myself I am the best in the division, I need to beat Berchelt.”

The future isn’t so clear for Dogboe who, since losing to Navarrete for the second time in May 2019, has not seen live action. Dogboe similarly shifted his focus to finding a new trainer. His father, Paul, took a lot of heat for how he handled the rematch against Navarrete, with many believing he should’ve stopped the fight sooner.

Dogboe is now training with Barry Hunter in the Washington area.

“Right now I feel great, I’ve been with Barry since December of last year,” said Dogboe, who is still just 25. “He’s seen me go through the process and everything, and I feel great. I feel great mentally, physically and spiritually. So right now I’m at peace, I’m just ready to roll. I can’t wait to get back in the ring.”

Hunter said he would like to see just what Dogboe has left when the bell rings — not just physically, but psychologically.

“That’s going to be key,” said Hunter, adding Dogboe has a strong work ethic and is a willing student. “Skillwise, yes, he can fight, but it’s like a baseball player who could’ve been a legend but got hit with a bean ball. And then every time he stepped up to bat, he’s scared, or he flinches.”

Prior to the losses to Navarrete, Dogboe was streaking after impressive victories over veteran Cesar Juarez in a fifth-round TKO, stopping Jessie Magdaleno in Round 11 to win the title and a first-round TKO of Hidenori Otake. Those victories earned him a co-promotional deal with Top Rank.

Does Dogboe have the same unshakable confidence in his abilities as he did before the losses? He has such faith that he is willing to take his 5-foot-4 frame to the featherweight division to face Avalos.

“It’s in my nature, I believe in faith,” Dogboe said. “And I believe faith is what drives me. You might see confidence — but I see faith.”

Things to look for Tuesday

1. While the super middleweight bout between Edgar Berlanga and Eric Moon is scheduled for eight rounds, so far in his 13-fight career, Berlanga (13-0, 13 KOs) has never seen the second. This could be the night, as Moon (11-2, 6 KOs) is an experienced fighter who has gone the 10-round distance twice, as well as a 12-round decision. He has just one stoppage loss in his career.

2. It’s not often you see an ESPY winner on a boxing card, but that’s what we have with junior flyweight Kim Clavel, who won the Pat Tillman Award for Service for her work during the coronavirus pandemic as an overnight nurse at long-term care facility for older people, putting her boxing career on hold.

3. The stakes are going up for junior welterweight Elvis Rodriguez. After scoring a first-round KO victory over Danny Murray with a powerful right jab on July 2, the left-hander from the Dominican Republic, who has power in both hands, faces Dennis Okoth in what could be his toughest test to date. While Okoth’s record is modest (4-3-1, 2 KOs), he’s been matched against tough opponents from the very beginning. In eight fights, Okoth has not been paired against anyone with a losing mark.