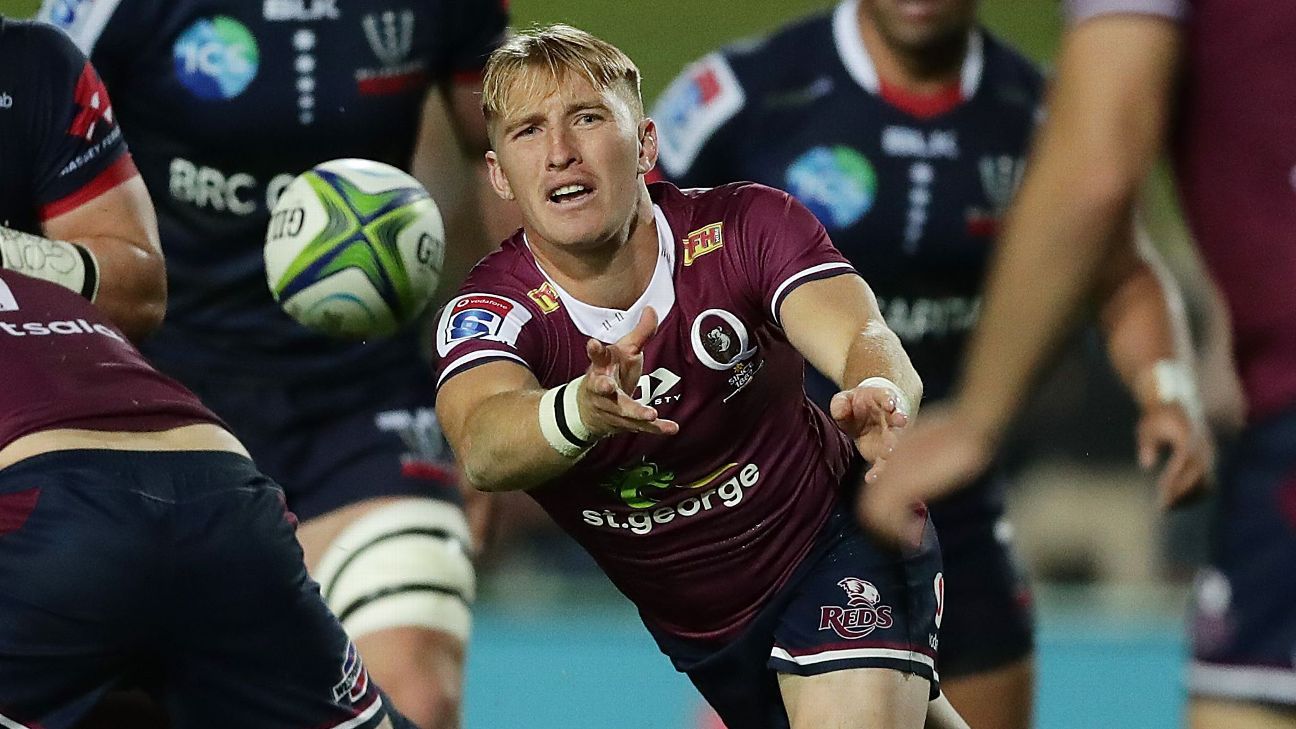 Former Wallabies star Will Genia wants new coach Dave Rennie to back the youth in Australian rugby by throwing a new halves pairing into the Test arena at his first opportunity.

It remains to be seen whether the Wallabies will get the chance to face the All Blacks – and possibly the Springboks and Pumas – this season, with no confirmed dates for either the Bledisloe Cup or Rugby Championship.

When Test rugby does eventually return, Genia would like to see Rennie capitalise on the opportunity of a full World Cup cycle by throwing the form halves in Super Rugby AU into the far deeper waters of international rugby.

Having called time on his own Test career after last year’s World Cup, Genia is particularly excited by what Reds scrum-half Tate McDermott might offer the Wallabies; McDermott seemingly the man to challenge Nic White at No. 9 who this week officially rejoined the Brumbies.

“The best No. 9 of the competition [Super Rugby AU] thus far would have to be Tate, I love the way he plays the game,” Genia told The Tight Five Live podcast. “He brings this energy and this presence on the field where you just never know what he’s going to do.

“He’s got an exceptional running game where he attacks the fringe defenders around the ruck, but then he’s worked on his pass to make sure he can, when he gets out, he can play the short runners or play the 10 out the back.

“When you have a player like that it’s hard to defend because you don’t know what he’s going to do. He reminds me a little bit of Faf [de Klerk] in the sense that he’s like an Energizer Bunny; he’s always moving, always doing something. He loves the contact, loves getting involved in the physical side of things as well. For me, I just think his game translates very well into the Test arena, I think he’s certainly the guy who’s leading the way from a halfback perspective.”

At just 21 years of age, McDermott certainly represents the longer term future for the Wallabies at No. 9 while White would likely only get through to the next World Cup in France when he would be 33.

What role White, who was constantly in and out of the Wallabies starting XV last year as Michael Cheika failed to settle on a preferred halves pairing, plays for the Brumbies in Super Rugby AU is uncertain, particularly given Joe Powell has been in excellent form, while back-ups Ryan Lonergan and Issak Fines have also made an impact with limited opportunities.

One spot wider, fly-halves James O’Connor, Matt To’omua, Noah Lolesio and Will Harrison have each pressed their Test claims at different stages throughout the two separate playing sequences of 2020.

But Genia again believes Rennie would be well served by backing youth, albeit amid the uncertainty of Lolesio’s hamstring injury.

“In terms of the 10, I’d probably say Noah [has been the form 10]; it’s unfortunate that he’s injured,” Genia said. “But I like what he’s been doing, I like the fact that he’s not someone who gets overawed by the situation or the moment within games; he does the simple things really well. And I’d probably love to see him have an opportunity.”

To’omua and O’Connor represent the safer first-up options for Rennie, though Genia, who had the experience of playing alongside both players on multiple occasions at the top level, believes the pair’s best positions lie further along the backline.

“My feelings about Matty is that he’s probably more a 12 than he is a 10,” Genia told The Tight Five. “He’s got all the attributes to be a world-class 12 in the sense that he’s a big body who’s a great defender, he makes his tackles; he runs good lines and he runs hard because he is that big body.

“But then he’s got the added bonus of having great ball skills and a great boot on him as well. It’s an interesting one because as a 12, you’re either one or the other; you’re either a 12 say for example Matt Giteau or you’re like a Manu Tuilagi where you’re just a big guy who runs exceptional lines and is hard to tackle. Matty is blessed with the best of both, which I think separates him and cements him as the Wallaby 12; I’d love to see him have that No. 12 jersey.”

While Genia likes To’omua at inside centre, he believes O’Connor would benefit from even more space.

“I think James has been there [at 10 for the Reds] out of necessity because they don’t have someone who can do the job as well as he can, and granted he has been playing really good rugby,” he said.

“But having had experience with James, I played with him as a 10 during the Lions series and played with him a lot, his greatest strength is his running ability. You think back to when he first came on the scene, he’s not exactly lost any pace or anything like that – maybe just a touch – but his footwork in contact, his strength in contact and his ability to run good lines and run the ball is exceptional.

I think it’s probably what’s given him success wearing the 10 jersey, the fact that when he runs he puts pace on the ball and makes people sit [in defence] which then allows him to play people into space around him.

“But I just think he’s not an out-and-out 10, he is probably a fullback at this stage of his career; someone who has that running ability, who’s good under the high ball and can kick, who can probably ball-play every now and again stepping in there as the phases roll on.”

If Rennie was to back a halves pairing of McDemott and Lolesio later this year, there would be no greater first-up challenge than facing an All Blacks combination of Aaron Smith and Richie Mo’unga, who have been among the standout players in Super Rugby Aotearoa.

But Genia says the Wallabies have a chance to reinvent themselves under Rennie and bring through a talented, but raw, next generation of players.

“From my experience, I first played for the Wallabies when I was 21, you never really think that you can do it until you’re there,” he said. “And the more the coach trusts you and backs you and believes in you and gives you those opportunities, you start to believe more in yourself and have more confidence in yourself.

“I just think it’s the right time now, from my perspective, to give these young blokes an opportunity; they’re actually playing well enough to deserve it, too.”