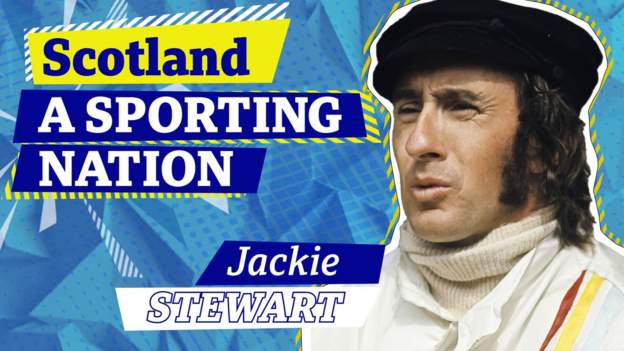 Last updated on 3 hours ago3 hours ago.From the section Formula 1

Throughout July, BBC Scotland’s Sporting Nation series is reflecting on some of the greatest feats and personalities from Scottish sporting history. Here we look at Jackie Stewart, a three-time Formula 1 world champion and a driving force behind the campaign to introduce more safety measures to the sport.

It is October 1973 and Sir Jackie Stewart is preparing to bow out of Formula 1 by celebrating his third World Championship win. He has raced in 99 grands prix, and he wants the 100.

It should have been a weekend Stewart would never forget, one he could look back on with happiness, pride and satisfaction as he achieved that milestone.

“You’ve made all that money, you’ve had that success, you’ve had the adulation and baloney that goes with it, and, suddenly, God slaps you on the wrist,” Stewart says, painfully remembering that ill-fated Saturday afternoon in Watkins Glen, New York.

“Suddenly, he takes the life of the person you’re closest to outside of your family.”

That person was Francois Cevert, Stewart’s 29-year-old Tyrrell team-mate, his protege and his friend. He had died in a horrendous accident on the same track the Scot was due to perform his lap of honour.

“The injuries were so graphically horrible, I wouldn’t wish anyone to ever see something like it,” he said. “It was another time that someone I was really close to was killed right in front of me.

“I counted 57 people who died who we’d had in our home, stayed in our home, had dinner with, travelled with, holidayed with. It was hideously dangerous and it had to be changed.”

‘It wasn’t celebrated, it was ignored’

Even from a young age, Stewart was made well aware of the dangers of his biggest passion.

“There’s only ever going to be one racing driver in this family, and he’s just retired,” mother Jeannie told him, referring to his brother Jimmy, who was eight years older and had survived a few nasty crashes.

However, a conventional job was seemingly out of the question for young Jackie, as he struggled with his education and was later diagnosed with what he describes as “extreme dyslexia”.

He left school as a 16-year-old and went to work in his father’s garage, where his racing journey began. Initially, Stewart did not tell his mother, but she soon found out.

“I had to race under the pseudonym of ‘AN Other’,” he said. “Eventually it came out in newspapers about ‘Jimmy Stewart’s younger brother, Jackie’. Of course she read it…”

While Stewart’s achievements caused the sporting community to sit up and take notice, his mother closed her eyes and put her fingers in her ears. She didn’t want to know.

“She never once acknowledged that I was a racing driver,” he said. “If I won a grand prix, she would never say: ‘Oh, that was nice that you won.’

“When I won a World Championship it wasn’t celebrated, it was ignored. It was never discussed in the house, ever.”

Campaigning for greater safety in F1

In 1966, Jeannie’s worst fears very nearly became a reality. A crash at the Belgian Grand Prix left Stewart stuck in the cockpit of his BRM for 25 minutes with petrol leaking from the car.

“I was trapped for a long time,” he recalls. “I was soaked in fuel, the electrics were still ticking – they could have gone up in flames at any time.

“No assistance, no marshals, no medical people, no tools to get me out of the car. It was a wake-up call. It alerted me to what was wrong with driving racing cars.”

Stewart survived, but his colleagues would not be so lucky in the years to come.

“I don’t want to make any more friends in this sport. It’s too hard losing them,” Stewart had said after Jochen Rindt was killed in 1970, two years after Scot Jim Clark.

“Four drivers in four months died that were living with us, travelling with us, eating with us and racing with us. Nothing was being done.”

Stewart knew he had to use his platform to change Formula 1 for the better. He campaigned for run-off areas, better barriers, advanced medical facilities and proper marshalling. He led boycotts of the biggest venues – such as Nurburgring and Spa-Francorchamps – because of poor safety measures.

His quest was met with adversity and a lack of recognition, but Stewart has been instrumental in the sport becoming vastly different in terms of driver safety since his heyday.

His glittering career was plastered with success and joy, but plagued by grief and loss.

“Racing was my life. It was my whole life. I was consumed by it,” he reflects.

“I never drew any blood from an accident involving motor racing. I came through it remarkably unscathed – but mentally damaged, I’m sure, by all the deaths.”