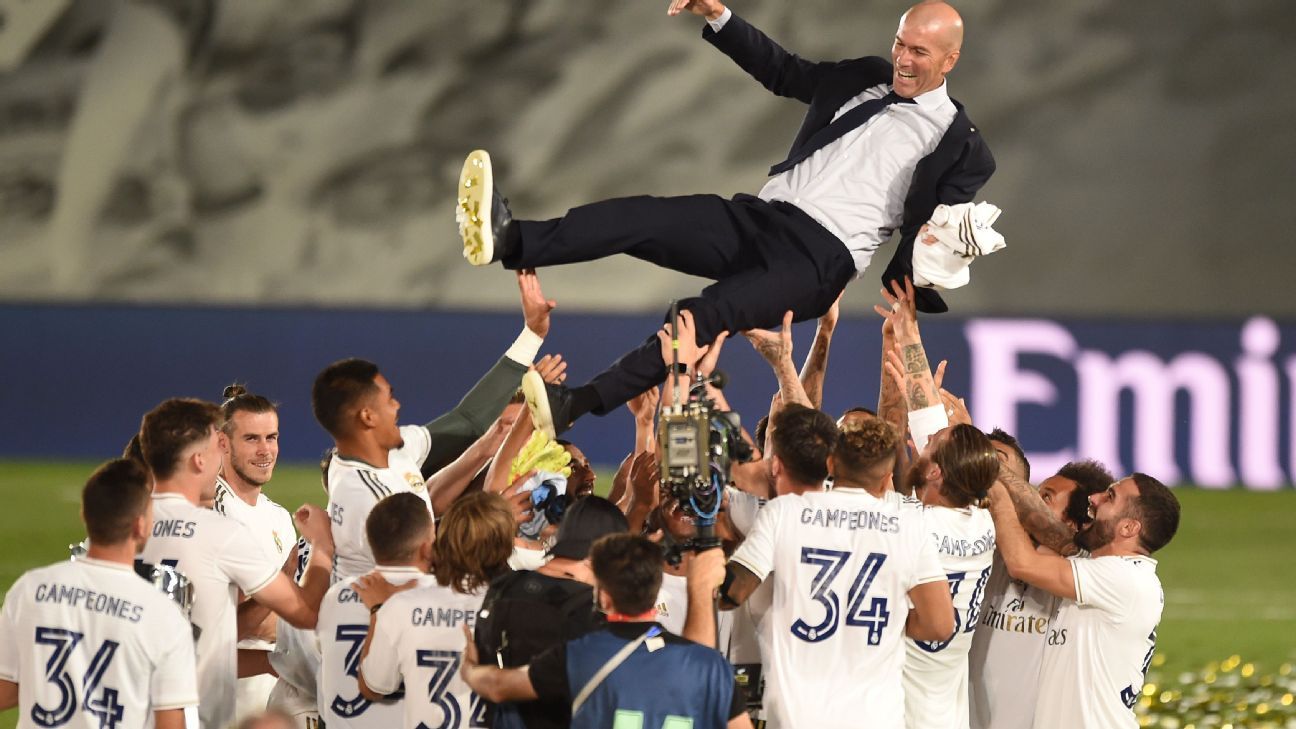 Football is a sport of fantasy, ferocity, failure, fun and phenomenal talent. So when a season ends the normal, reassuring, thing would be to immediately reach for adjectives to help us appreciate Zinedine Zidane‘s majesty, the brilliance of Karim Benzema, Lionel Messi‘s misery, another Monchi project which wins A+ marks or tall tales of how Leganes tried to defy all the odds and fought like tigers against harsh circumstances which would have daunted “The Jungle Book’s” Shere Khan himself.

Instead, there’s something more important to say first. And that is: “Thank you.”

Thank you to La Liga chief Javier Tebas at the top, to every footballer, doctor, physio, member of the cleaning and disinfecting staff, ball boy and girl, single kit man, and all the wives and children of those listed above. Plus dozens more.

In Spain, since La Liga declared they were #BackToWin, we have seen such a spectacle. We’ve witnessed truly remarkable skill, creativity, inventiveness, effort, emotion and disappointment which have vaulted over the brutal, unfair and hard to control events which have recently enveloped the world amid the coronavirus pandemic. What has happened from La Liga’s resumption on June 11, until now, will be remembered not with an asterisk, not for the fact that there were no crowds, nor for what might have been a huge error in attempting to put on a ‘failed’ football spectacle when so much in the world was dangerous, confused and unpredictable. Football, at least in La Liga, has been utterly beautiful. Riveting, high-quality, enjoyable, worth the effort and a panacea for the fact that none of us can be quite sure of what the immediate future holds.

Thus, it would be lacking in judgement not to show huge appreciation for the people who took us from where we were in early April, when serious restart planning began, to now when we’ve enjoyed so much sporting triumph, endeavour and outright failure which will linger in our memories for a very long time.

Okay, restarting football wasn’t simply a utilitarian act, generously provided for the good of society. There were huge financial imperatives to bring it back. But the fact remains that it was both improbable and fraught with risk. There was a Gordian knot of administrative planning to confront both the health and technological challenges. Tebas, and his staff, didn’t just dream of mounting a fight-back, they used first-class predictive data to guide them as to when and how things might, some months in the future, begin again. Since restarting, their promise that everything could be achieved without putting players, technicians, staff or fans, who might be tempted to mob the peripheries of stadia, at risk has been proven true.

The sport we love is not only wildly capable of idiocy, laughable errors and huge failures to pay attention to the well-being of its component parts; those facts are part of the reason we love it, warts and all. So promising that “it’ll be all right” was fraught with the possibility of football shooting itself in the foot. On this occasion, however, we owe our sport, and its people, a standing ovation. Think of it like this: at a time when many other parts of society are suffering a resurgence of COVID-19 infections, when some have proved incapable of sticking to the rules which will keep us all safe, football has been exemplary. Almost no one has broken rules. There have been no outbreaks of the virus. Social distancing has been observed.

The care with which every single daily session needed to be treated shines out via the health and wellbeing of all the various staff involved. Madrid fans largely obeyed the multiple requests to stay away from celebrating the title at Cibeles Fountain in Spain’s capital after defeating Villarreal last Thursday.

This gigantic experiment in logistics, bio-medicine, sports science and broadcasting which initially looked so dauntingly hard to achieve, has turned into an example for the rest of society in how to behave. How to stay safe. How to succeed. Forgive my mix of cynicism, realism and cruel humour: football’s normal characteristics of “knowing better” and doing precisely what it wants, will resurrect themselves soon enough. So, for now, let’s celebrate.

Just a quick word, too, about those who’ve given us the televisual spectacle. Even if you’re one of those Luddites who can’t bear the idea of artificial crowd noise with your football from empty stadiums, the fact remains that it has been popular, it’s edited in tune with the match events, and even the “fake” crowd (which admittedly disappears if the camera moves are too swift) help the viewing experience.

Also, long live fans and raucous crowds. But for so long as empty stadiums were helping fans ensure they live longer, then this was a more than acceptable adjunct to the spectacle. And what a spectacle.

Madrid won a title which they craved. It had been too long. And, frankly, as soon as they stated, last summer, that this was their priority, above the Champions League, it looked within their grasp. But it’s the how which thrills, not the how much they wanted it. Thibaut Courtois cast off his doubts and the goalkeeper became a racing certainty to win the Zamora award for least goals conceded. Benzema played like he’d never heard of Cristiano Ronaldo — goals, assists, leadership. Class. Sergio Ramos? Well, a decade after he became a world champion with Spain the defender put on a spectacle. Barnstorming, bravado, brilliance, brutish refusal to be defeated. A hail of goals, just when they were needed. Marco Asensio‘s storybook return from over a year out. The stories just flowed.

A midfield — Casemiro, Luka Modric, Toni Kroos and Federico Valverde in particular — which thought its duty was to defend as well as trot around looking clever on the ball. That made all the difference. Just ask Ramos and Raphael Varane and they’ll tell you.

It’s testimony to how good, how mentally tough, Barcelona‘s players are that despite being managed intensely badly at corporate level and then, with the arrival of Quique Setien and Eder Sarabia at a technical level, they managed to keep the title race alive until the penultimate match. They lack an intensity on the training ground and they rely on talent, not organisation and strategy, to pull themselves through. The decline became irreversible when Madrid just started winning and winning.

But even in a season where his form fluctuated, Messi’s outright genius hauled the defending champions through to a point where Madrid thought they’d have to play 11 matches of flawless football in order to regain the title. Sacking Ernesto Valverde was a self-indulgent idea; appointing Setien and thinking he had the personnel skills to handle Messi, Jordi Alba, Luis Suarez, Sergio Busquets and Gerard Pique was infantile. The dropped points to Sevilla, Atletico Madrid and, above all, Celta Vigo, ended Barcelona’s realistic hopes. But the lineup and the defeat to Osasuna should end Setien’s hopes of maintaining this job.

Kudos to Granada, often featured here. From a pretty mundane, prosaic-but-effective playing style, they’ve evolved into a daring, hard-running side that isn’t simply in European competition for the first time but which thumped Athletic Bilbao with their biggest winning margin against Los Leones since 1972 in order to achieve the unimaginable. Villarreal will be wreaking havoc in Europe again next season. Happy days. But sad nights, without the wonderful, beautiful, inspirational and fun Santi Cazorla and Bruno Soriano. Adios chicos, you’re made of the right stuff and we’ll cry when you’re gone.

Valencia feel like they are disintegrating — even after they joined Celta, Espanyol, Real Betis, Leganes, Alaves and Barcelona in sacking a coach or coaches. For Alaves it worked, and how. For Celta and Betis too as they also avoided relegation. For Leganes, Javier Aguirre nearly pulled off what would have been a modern miracle. But … the rest? Espanyol, Barcelona and Valencia are left with the appearance of having made knee-jerk decisions which mostly made things worse.

That said, might Valencia winger Goncalo Guedes have produced the goal of the season? Against Osasuna, post restart, he made a run from one end of the pitch to the other with tackles which made him fall over but not so much that his determined momentum was stopped until he burst the net.

Or should the award go to Benzema? In a tight game against Valencia in June, a ball came in from Asensio on the right. The flip upwards with his right boot and the volley into the top corner with his left was something approaching genius.

What’s that? You didn’t really follow Leganes’ “nearly” miracle? Losing striker Martin Braithwaite to Barcelona outside the transfer window because Ousmane Dembele was ruled out of the season, and stripped of Youssef En-Nesyri, Guido Carrillo, Oscar Rodriguez towards the end of La Liga, too. A massive haemorrhage of unreplaced talent, and especially goals. But they refused to surrender, broke every single expectation of them and played convincing, entertaining football right to the very last minute of week 38, finishing just a point off safety after holding the champions to a 2-2 draw. Hats off to them and to Aguirre.

There were amazing little cameos. Mallorca were relegated despite beating Valencia, Real Madrid and Villarreal 8-2 on aggregate. Or what about Celta Vigo? In a nine-day period the Galician club beat Alaves 6-0, won at Real Sociedad, drew 2-2 with Barcelona and were then humiliated 5-1 at … Mallorca again.

The maverick Lucas Ocampos set our league alight. This was his best season, in a Sevilla side where 13 new senior players were added — almost all of them clicked and some of them shone. Truly, sporting director Monchi is a genius. Ocampos is like a wild mustang — untamed, dangerous, fun and liable to prance and scamper all night.

Now for the Champions League, and then the new season. But for those who feel joy, exuberance, unity and excitement right now: be careful what you wish for. And be careful about letting your heart rule your head in terms of expectations.

At this stage last season, Barcelona were title winners. Now they are in a state of some chaos with the playing and administrative staff on the verge of clawing at one another. At this stage last season, Espanyol had not only achieved European football for the first time in eons, but Borja Iglesias was carried off the pitch, shoulder high, by jubilant fans and Rubi was the toast of the town. Now they are relegated for the first time since the early 1990s, Rubi’s been sacked by Betis and Borja’s goal haul looks like nothing more than a mirage if you’ve been watching his lacklustre lumbering these last few months.

So, it just remains to emphasise the original point of this column: thank you for bringing football back, thank you to everyone, especially the players, who gave us great chunks of brilliant entertainment every three days. And if this truly is the last for Santi Cazorla, Ever Banega and Bruno Soriano in La Liga then, guys, adios with love and affection. Across every playing surface of Spain’s elite you’ve composed symphonies of some of the most elegant, intelligent and enjoyable football any of us have seen. Thank you for the music, Santi, Ever and Bruno. For giving it to us.