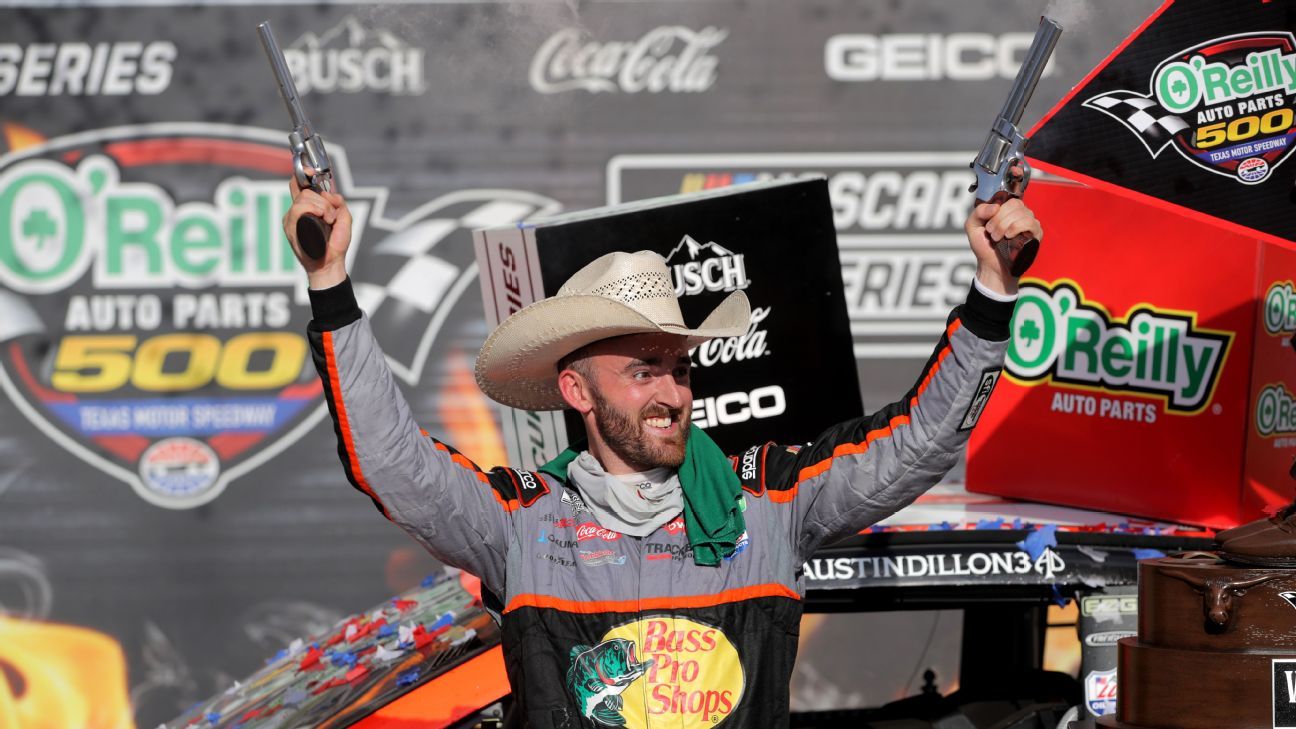 FORT WORTH, Texas — Austin Dillon stayed in front after a restart with two laps to go and beat rookie Tyler Reddick to the checkered flag at Texas, giving Richard Childress Racing a 1-2 NASCAR Cup finish and quite a show for spectators spread out in the stands on a scorching Sunday.

Dillon raced to his third career win and first since Daytona at the start of the 2018 season. He stayed in front on three late restarts, the first after an incident with 29 laps left that shuffled the fast car of Ryan Blaney to a lap back.

“Not bad for a silver-spoon kid, huh?” said Dillon, the grandson of Childress. “Tyler Reddick, he raced me clean. One-two for RCR. This has been coming. We’ve had good cars all year. I’ve got my baby Ace back home, my wife. I’m just so happy.”

It was the first 1-2 finish for RCR in the Cup Series since Clint Bowyer won at Talladega in 2011 ahead of Jeff Burton.

On the final restart, Dillon got a good jump and raced to the checkered flag ahead of his rookie teammate and some veteran drivers.

“Can’t ask for much more than what we got there,” Reddick said. “I just wanted it to be between us. I didn’t want bring other cars into it, make sure that we could fight it out. We just got the restarts that kept giving us opportunities.”

Joey Logano finished third, with Kyle Busch coming in fourth a day after he finished ahead of the field in two races — having an Xfinity Series victory taken away after his car failed a post-race inspection before winning the Truck Series race at night. Series points leader Kevin Harvick was fifth.

There were an estimated 15,000-20,000 spectators at the track, where it reached 97 degrees late in the first summertime Cup race at Texas. It was supposed to be a spring race nearly four months ago before the coronavirus pandemic postponed and then shuffled NASCAR’s schedule. Inside the cars, it was 130-140 degrees.

After leading six times for 150 laps, both highs for the race, Blaney finished seventh.

Blaney, who had given up the lead when he pitted on Lap 287, fell a lap down after the field got shuffled with 29 laps to go when rookie Quin Houff crashed hard out of Turn 4. That also put pole-sitter Aric Almirola and Chase Elliott, coming off a $1 million win at NASCAR’s All-Star race at Bristol on Wednesday night, a lap down.

Cole Custer, the rookie driver for Stewart-Haas Racing coming off a win last weekend at Kentucky, was one of the 11 drivers involved in a chain-reaction crash on Lap 218 that brought out a red flag. His crumbled No. 41 Ford came to rest near the exit of pit road.

That pileup on the frontstretch came the lap after the restart, with most of the cars still jammed together as they came off the fourth turn when Blaney appeared to be among several cars to get loose, though he was out in front of the melee when cars started crashing.

Track workers took water to drivers in their parked cars on their track during the red flag that lasted more than 11 minutes.

It was 30 degrees warmer than it was on March 29, when the race had been scheduled before the pandemic. Texas will host a playoff race Oct. 25.

Before four-time Super Bowl champion quarterback Terry Bradshaw gave an emphatic command to start engines, he shouted hello to the “beautiful people” in the stands.

It was the first major sporting event in Texas in more than four months, and one of the largest gatherings of any kind in the state during the pandemic. The spectators were spread out along the frontstretch, which was fully shaded late in the race, and there were also people in about 40 suites.

Speedway Motorsports, which owns Bristol and Texas, is a private company like NASCAR, and does not release official attendance numbers. But there appeared to be about 20,000 fans at Bristol for the All-Star race last Wednesday night, and a similar crowd had been expected at Texas, where current regulations would have allowed 50% capacity at the track that seats about 135,000.

“These are the folks that wanted to be here. We never were trying to set an attendance record and I told y’all you’re going to turn on the TV and go, ‘nobody’s there,”’ TMS president Eddie Gossage said during the race, without confirming any figures. “The truth is, there’s a pretty good number here. But still, a massive place.”