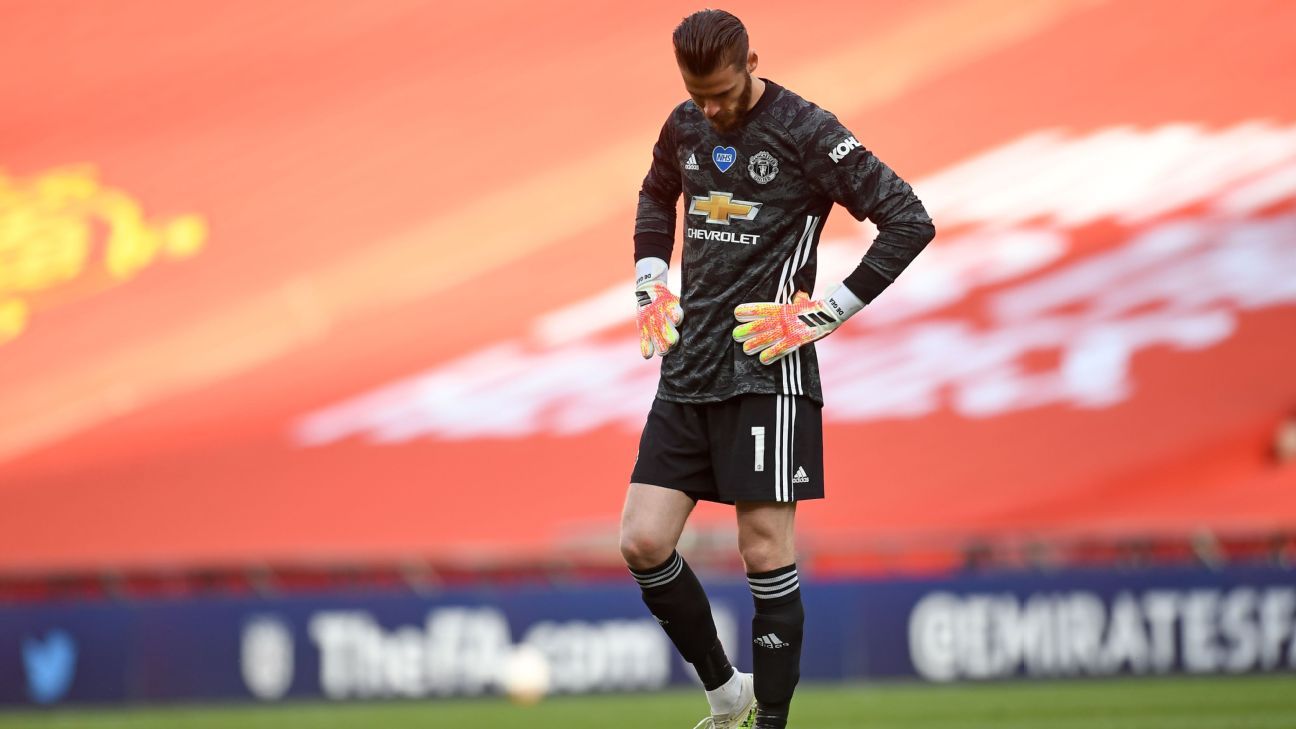 LONDON — Manchester United do not tend to play their first-choice goalkeeper in the FA Cup. After David De Gea‘s performance against Chelsea at Wembley, the jury is now out on whether they did so in this FA Cup semifinal.

De Gea made his first appearance in the competition since the 2018 final, a 1-0 defeat to Chelsea in which Eden Hazard scored the only goal of a drab game. This latest meeting of two clubs with a combined 20 FA Cups followed a similarly meandering pattern until a prolonged first-half stoppage-time period following a head injury sustained by United’s Eric Bailly.

The defender was stretchered off and, with his side having switched from three centre-backs to 4-3-3, Chelsea struck in the 11th added minute, Willian released Cesar Azpilicueta down the right and the Chelsea captain found Olivier Giroud with a driven cross that the striker met with a deft near-post flick. De Gea only had a moment to react but could only slow the shot as he fell backward, allowing the ball to dribble over the line.

If there was any doubt the goalkeeper had already become the fall guy, he made sure with a dreadful error moments into the second period. Brandon Williams passed the ball straight to Mason Mount, who charged infield before firing a speculative 20-yard drive that possessed only minimal swerve. De Gea, though, was slow reacting to his left and the shot went in off his fingertips with embarrassing ease.

United were second best all over the pitch throughout this game and may well have lost regardless, but De Gea helped give Chelsea the initiative and, in doing so, turned scrutiny upon himself at the end of a week that began with him reaching 400 appearances for the Old Trafford club.

Between 2013-18, De Gea was named in the PFA Premier League Team of the Year five times and won United’s Players’ Player of the Year award three times. In the midst of those awards, he almost joined Real Madrid in 2015, only for a now infamous broken fax machine to scupper the deal.

United breathed a huge sigh of relief, perhaps a sense that lingered when he was handed a £375,000-a-week contract two years ago, running to 2023. De Gea should be in his prime and time remains on his side to prove he can recapture his old form, but there have been many times this season — before Sunday’s howler — that suggest the rot has set in.

Mistakes against Watford, Everton, Tottenham and Bournemouth have continued a decline that began some time ago. Playing him against Chelsea was designed to add stability amid a formation change, but instead cost United a place in the final.

Back-up Sergio Romero faced Wolves twice, Tranmere, Derby and Norwich earlier in the competition and conceded one goal; indeed, the 33-year-old has nine clean sheets in his last 12 games. The level of opposition may have been lower than Chelsea, but his concentration must remain, which cannot be said of De Gea at present.

“I can’t speak for David De Gea’s confidence but he is mentally very strong,” Solskjaer told the BBC. “He knows he should save that one 100 times out of 100 but that’s football for you. I made the decison to play him and mentally he was ready for it.

The way things are going, Dean Henderson could start next season in goal for either of these teams. On loan from Man United at Sheffield United and with a contract running down, the 23-year-old has been linked with Chelsea as they ponder the future of Kepa Arrizabalaga, left out at Wembley in favour of cup goalkeeper Willy Caballero.

Solskjaer mentioned the need “to move on” after this defeat, with a pair of games ahead that will decide his side’s top four fate in the league. After Leicester lost at Tottenham, United will seal a Champions League place if they avoid defeat at home to West Ham on Wednesday and at Leicester four days later. They also have a potential way in when the Europa League resumes next month.

“It is between us, Chelsea and Leicester for those last two positions,” said Solskjaer. “The more help we get from others, the better. But if we do our job on Wednesday, we will be in a good position before we go into the Leicester game. We have just got to regroup and go again … We have got loads of things to learn as a team but we are learning, we are developing.”

Leicester’s defeat was also a fillip to Chelsea and Lampard, who won the tactical battle on Sunday by using a back three shape to nullify United in attacking areas and end their unbeaten run at 19 matches.

With Paul Pogba, Anthony Martial and Mason Greenwood all on the bench — — Solskjaer’s team selection reflected signs of fatigue in their midweek win at Crystal Palace — United started with a back three, then went to a 4-2-3-1 shape following Bailly’s injury but were a shadow of the team that has played so well since the restart.

Olivier Giroud bullied Harry Maguire, Mason Mount excelled in midfield and Chelsea advanced while resting Christian Pulisic for their own final Premier League push, with games at Liverpool and against Wolves.

The need to regroup quickly, then, is clear for both teams, but amid the to-and-fro for cup glory and top four finishes, De Gea’s day to forget has renewed a problem to United that might need to be solved — once and for all — during what is set to be a short break before the new campaign begins.