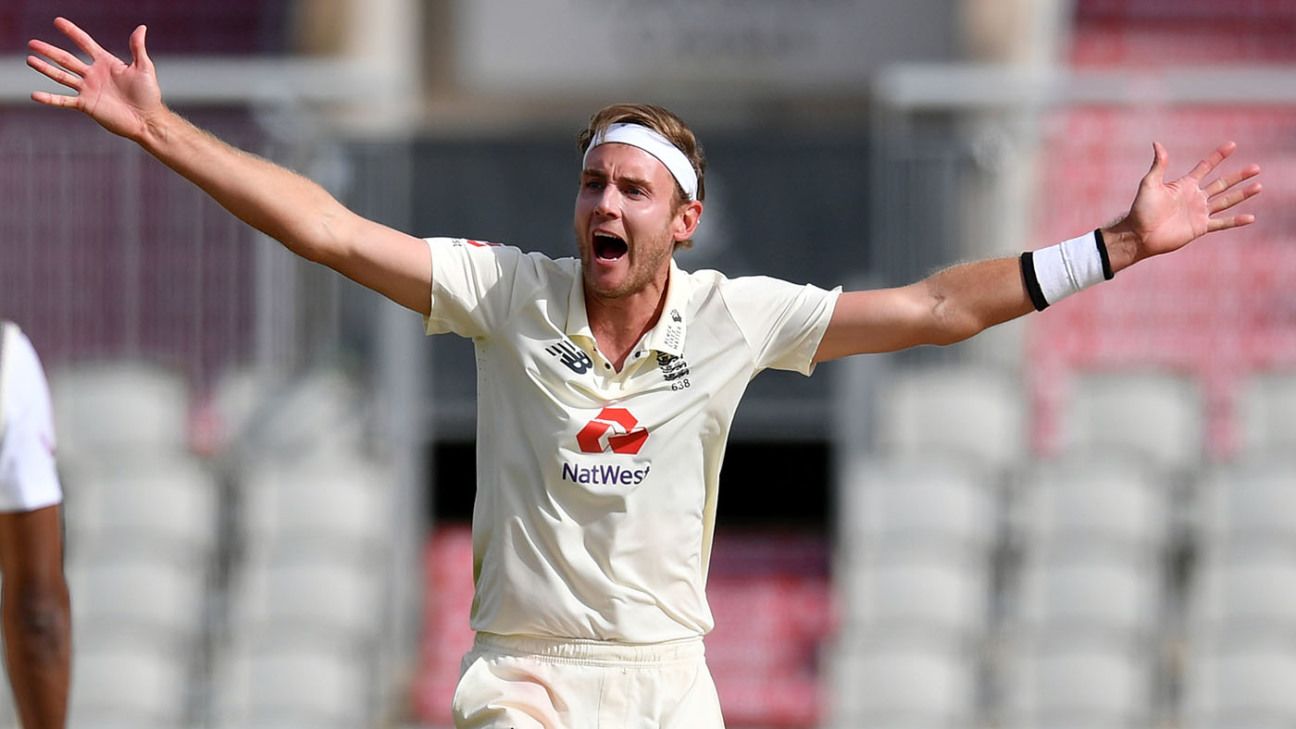 Not long after tea on the fourth day, it looked as if this Test was heading, as Stuart Broad put it, for a “bore draw”.

West Indies required only 38 more runs to avoid the follow-on and had six wickets in hand. On a slow surface, it looked as if they could bat themselves into a position whereby England simply wouldn’t have time to force the win that would sustain their hopes of winning the series.

“Everyone was thinking this game is going nowhere,” Broad said. “It looked as if it was going to be such a dull game.”

At that stage Broad had figures of 0 for 64 from 19 overs. He hadn’t, by any stretch of the imagination, bowled poorly. But neither had he produced the performance that proved last week’s non-selection wrong. Yes, he was still a high-quality seamer with vast experience and a magnificent career behind him. But he hadn’t demonstrated he was necessarily part of England’s first-choice attack any more.

But then England took the new ball. Within minutes, Broad had taken three wickets – each one of them a recognised batsman – for one run and West Indies lost their final six wickets for 45. Suddenly, the match and the series was back in the balance. We could have another enthralling fifth day in store.

It wasn’t quite Jo’burg in 2016. And it wasn’t quite Trent Bridge in 2015. Broad can’t quite generate the same pace or replicate the same movement. But it was an important spell that not only pulled England back into this match, but showed that there was life in the old dog yet.

“Jimmy has taken 130 Test wickets since turning my age. Why can’t I do the same? I’m hungry”

Except, as Broad points out, he’s not actually that old. Perhaps because they have formed one of the most enduring partnerships in the history of English cricket, Broad and James Anderson are often grouped together. And the fact is, Anderson – who is 38 on the 30th of this month – is almost four years older than Broad, who was 34 on June 24.

“Jimmy has taken 130 Test wickets since turning my age,” Broad said. “Why can’t I do the same? I’m hungry. My fitness record is good. Why not try to play to Jimmy’s age and emulate his success? I think I can and I think today proved that.”

Maybe Broad is at the stage of his career where he requires a bit of assistance from the surface or the conditions. Modern English pitches, with drainage that perhaps takes too much moisture out of surfaces, can dry alarmingly quickly. Here the new ball appeared to magnify some increasingly unreliable bounce and presented Jermaine Blackwood, in particular, with one that kept horribly low.

But, as a bowler, you still have to be able to exploit such assistance. And here, after deciding to concentrate simply on hitting the pitch as hard as he could with the new ball, Broad used his height and his control to great effect.

Shamarh Brooks, forced onto the back foot by a series of short balls, was slow to come forward to a fuller one that nipped back before Shane Dowrich, who had just survived a bouncer that roared past his throat, was also caught on the crease by the follow-up full ball. The heavy roller may take a bit of life out of the pitch before West Indies bat again but, with the possibility of two new balls on the final day, England – and Broad in particular – will still fancy their chances of forcing victory.

Broad spoke well after play. He spoke of his hopes for the future, his reaction to missing out in Southampton and his thoughts on the game and his impact upon it. But perhaps the most revealing moment was when, talking through that three-wicket burst, he said simply: “I loved that spell”.

And you can see why. For it’s a long time since Broad has produced such a spell. And with it becoming increasingly apparent that England are planning for a future that does not rely upon him or Anderson, he would only be human if he wondered if such an opportunity would ever present itself again.

That will take some adjustment. For a long time, Broad’s place in the side was unassailable. But first in Sri Lanka, then in Barbados and now in Southampton, England have left him out. Many successful players – with records and pride to preserve – might have decided to call it a day rather than be dragged back into the pack scrabbling for a place. It has become increasingly obvious that Jofra Archer’s emergence will diminish his opportunities.

But Broad’s not going to go quietly. Such is his passion to remain at this level, he has – at an age others would be calling it a day – remodelled his run-up and action and resolved to continue to fight for his place. There should be no doubt about his passion.

“I’ve had a really successful last two years. I had a lot of success in the Ashes and I was the leading wicket-taker in South Africa. I didn’t have a burning desire to prove anyone wrong as I genuinely didn’t feel I had anyone to prove wrong. I’d done my talking on the field.”

Earlier Broad had bowled respectably but without ever really threatening to produce such a spell. Having not played a first-class game since January, he seemed to struggle for rhythm and lacked much menace to his bowling. He admitted he felt under a bit of pressure.

But after Ben Stokes showed what could be achieved in a hostile 11-over spell, Broad followed suit. Bowling round the wicket, he generated decent pace – in the mid-80s for most of the day – he stopped placing the ball on a length and returned to running in hard and thumping it down in the time-honoured manner which proved so effective for the likes of Glenn McGrath and Curtly Ambrose.

“I felt under a bit of pressure here,” Broad said. “Any time you don’t have match practice you do feel added mental pressure to hit your straps. I took a couple of spells to find my feet. I was probably a bit careful early on.

“Stokesey was an example. The short-pitched bowling from round the wicket got me into my action and made me realise what tempo I needed to be at hitting the crease. So when that second new ball came I found the right tempo.”

None of this means that Broad will necessarily play in the final match of the series. Even if he bowls England to victory on Monday, he will have just spent the best part of two successive days in the field and, with just three days between games, it may well be decided to rotate the attack one more. Besides, Anderson, Archer and Mark Wood should all be available for that game, too. Broad is no longer an automatic pick.

But it bodes well for England that they have such resources. And it says something for Broad that, even now, at a time when he has nothing left to prove, he is still determined to fight for his place. He’ll never know when he’s beaten. It’s one of his great assets.