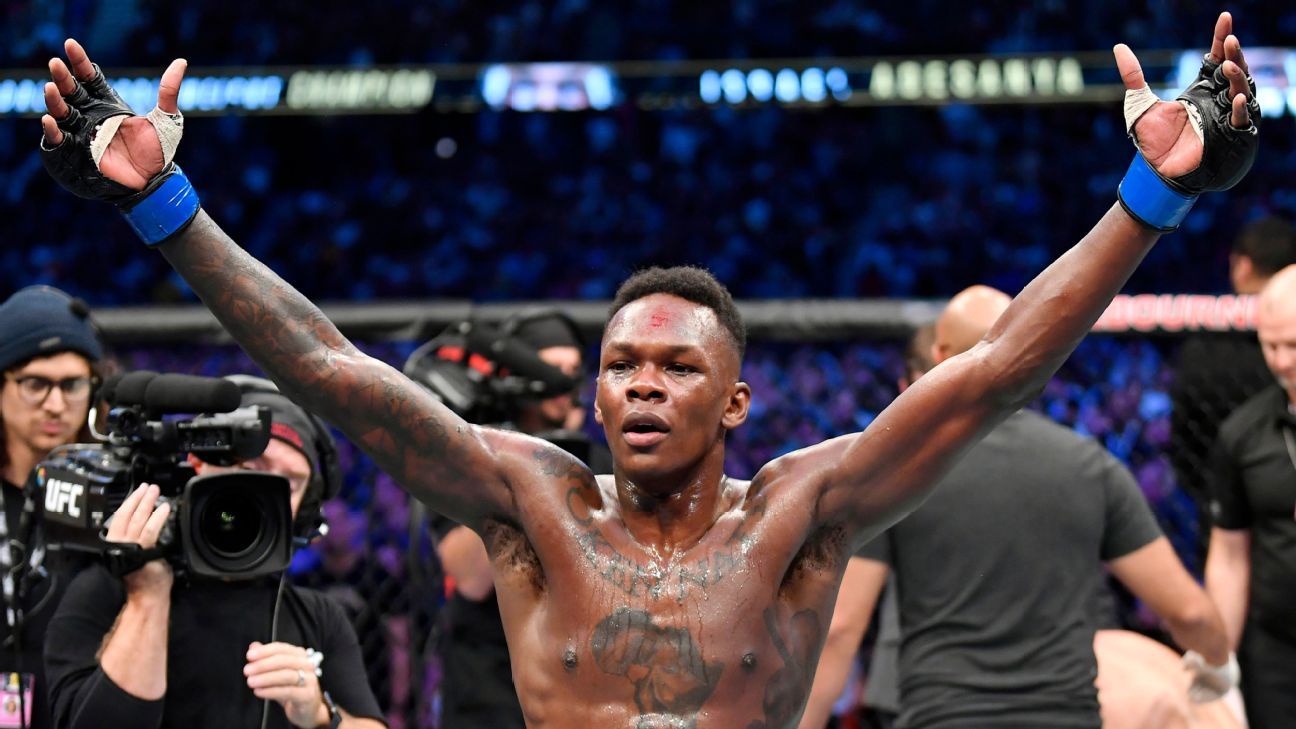 How excited am I for the recently booked Israel Adesanya vs. Paulo Costa UFC middleweight title fight on Sept. 19?

Let me count the ways.

For starters, when it happens, it will mark just the second time in UFC history that two undefeated men will fight for a UFC title. The first time was at UFC 98 in 2009, when then-champion Rashad Evans defended his title against Lyoto Machida — a fight that was ultimately won by Machida, via knockout.

Think about that for a second. It has been 11 years since a fight like this happened. There have been 150 UFC men’s title fights since then. Pretty incredible, right?

That alone gets me excited just because it’s so rare, but of course, we all love this fight for so many more reasons.

These two hate each other. I mean, they really can’t stand the sight of each other. And this doesn’t feel like one of those of fabricated feuds. I feel pretty confident in saying they won’t be hugging it out whenever the fight ends. That’s how you know a feud is the real deal.

Remember when Adesanya beat Robert Whittaker in October to unify the middleweight title? Remember how just seconds after the fight ended he jumped on top of the cage and started pointing and shouting at Costa, who was sitting cageside? It was like something out of WWF Saturday Night’s Main Event, only it was as real as it gets.

“You know who’s next,” Adesanya told Jon Anik moments after the biggest moment of his MMA career. “I got this overly inflated balloon animal. This heavy-ass Ricky Martin wannabe. … Trust me, when I’m done with him, he’ll really look like Ricky Martin. Botched.”

And then Costa tried to enter the cage, only to get stuffed by security.

It was a promoter’s dream. The fast-talking, flashy-as-can-be new champ, and the chiseled Brazilian challenger were about to do battle.

Dana White says he expects Paulo Costa to bring a fighting style that’s the polar opposite of Yoel Romero’s when he fights Israel Adesanya next. For more UFC, sign up here for ESPN+ http://plus.espn.com/ufc.

They had been trash-talking each other for months leading up to that point, with Adesanya repeatedly accusing Costa of being on steroids and Costa mocking Adesanya’s power and thin frame.

Unfortunately, it wasn’t meant to be. We found out shortly thereafter that Costa tore his left biceps. That was a real bummer, especially because there weren’t any other clear-cut contenders out there. Adesanya was booked against Yoel Romero instead, and, well, we all know how that went.

In fact, both men have a little more in common going into this fight. They are both coming off wins over Romero, and both were controversial for different reasons.

You see, some smart people believe Costa should have lost to Romero last year in what was a supremely close, hard-fought battle. In the end, Costa earned a unanimous decision win.

In March, Adesanya won a much-less exciting decision over Romero, in a fight that saw a bizarre amount of stalling and left us all feeling as if we were robbed of a great fight. Some people even felt as if Romero did enough to win that fight, but those people were splitting hairs. No one did much that night in Las Vegas, and Adesanya deserved to walk away with the belt.

This fight? This one will be fun. I can feel it.

Adesanya is on a mission to prove the Romero fight was an anomaly. Remember all the criticism he received afterward? One lackluster fight and everyone jumped off his bandwagon. I guess they all forgot how strong an argument he had for the fighter of the year in 2019. It really is a what-have-you-done-for-me-lately kind of sport.

Costa, for his part, won’t sit back in this fight. He doesn’t know how to. He has only one speed. He will bring the fight to Adesanya, especially because he dislikes him so much. Is that a smart approach to fighting Adesanya, considering the latter’s counter-striking process? No. But I still think it goes down that way.

Paulo Costa is looking for “skinny boy” and ready to “put these hands on your face, m—– f—–” 😳

In this title fight, we’ll get the silky-smooth striking of Adesanya vs. the brute force and power of Costa. I’d be shocked if a single takedown is attempted.

You know what else is great about it?

This is the title fight everyone wanted. There was no debate to be had about other contenders deserving a crack at the champ. And that can’t really be said in most UFC weight classes right now.

Before Daniel Cormier was finally booked to fight Stipe Miocic again, some suggested that Miocic should fight Francis Ngannou instead.

At light heavyweight, there is a faction who wants to see Jon Jones fight Dominick Reyes again, while others are pushing for Jan Blachowicz.

Welterweight champion Kamaru Usman has suitors in the form of Gilbert Burns, Leon Edwards and Jorge Masvidal, while he’s trying to coax Georges St-Pierre out of retirement.

You get the point.