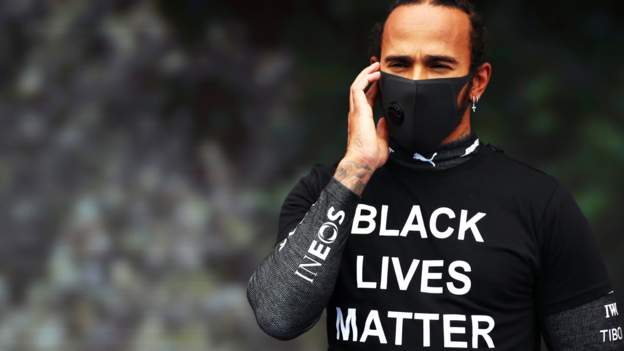 Lewis Hamilton has criticised his fellow drivers and Formula 1 for not doing enough to combat racism.

His comments came after a second consecutive race in which an anti-racism demonstration by the drivers was marred by confusion and lack of unity.

The Mercedes driver said: “There is definitely not enough support for it. It’s lacking leadership.

“From a drivers’ point of view, many seem to be of the opinion they’ve done it and they’re not doing it again.”

Before Sunday’s Hungarian Grand Prix, the drivers wore T-shirts bearing an anti-racism message, and the majority took the knee alongside Hamilton, employing a gesture that has come to symbolise the fight against racism and opposition to police brutality against black people.

It was the third race in succession at which such a demonstration had been staged. But a number of drivers were late, and the protest had to break up quickly when the national anthem began playing.

Hamilton said: “Ultimately, I think it is still individuals thinking it’s not important.”

He added that it was a “battle” trying to convince some drivers of the importance of the issue and singled out Haas’ Romain Grosjean, saying the Frenchman was one of those not showing enough support.

Grosjean is one of three directors of the Grand Prix Drivers Association alongside Ferrari’s Sebastian Vettel and former driver Alex Wurz, the chairman.

“The GPDA is run by three people, two who are really for it and supportive, and one who is one of those who tends to not think it is important to continue with.

“I try not to lean so much on the drivers because I don’t want them to feel it’s me who’s doing it because that probably could be in some cases the reason they don’t want to do it – because they think I’m doing it.

“But I don’t think it’s being taken seriously. There are perhaps people who have not grown up around it so don’t understand it and because of that ‘it doesn’t affect me’.

“I have heard those comments: ‘It doesn’t do anything for me so why should I do it?’

“But there are a few drivers who are in touch with me and are like: ‘Hey, I want to be a part of this, what can I do?’

“It’s fantastic and my dream is that by the end of the year we all know and understand things better and we all stand united and the whole of F1 is on top of it.”

Hamilton said the protest happened in too much of a “rush” because there was not enough time set aside for it, and said he would speak to F1 and governing body the FIA’s president Jean Todt about it before the next race.

“I will be getting in touch with F1 this week,” Hamilton said. “I will speak to Jean because no-one else is going to do it.”

F1 and the FIA have both announced programmes to address the issue of lack of diversity in motorsport.

But Hamilton said: “We haven’t made any progress.” And after praising Mercedes for their steps on the issue, he criticised the other teams for not doing enough.

“We’ve said things and there’s been statements released and we’ve made gestures such as kneeling but we’ve not changed anything,” Hamilton said. “Except for perhaps some of our awareness.

“There is one team I have spoken to who are already working in the background but no other teams I know of who hold themselves accountable.

“But you need a leader. Where is Jean in that scenario? It shouldn’t be for me to have to call the teams out.

“I want to encourage them, but it shouldn’t be me who has to get on the call and say: ‘Hey, what are you doing, what’s your plan?’ That should be announced or discussed from the top down, the powers that control and pull the strings.”

A spokesperson for F1 said: “Ending racism and increasing diversity and inclusion in F1 is a clear priority.

“We set out our plans for diversity and and inclusion last November and have in recent weeks announced additional plans to create a task force to tackle these issues and a foundation with over $1m already donated to create apprenticeships and job opportunities for under represented groups.

“We want to make lasting change and are acting to do this.”