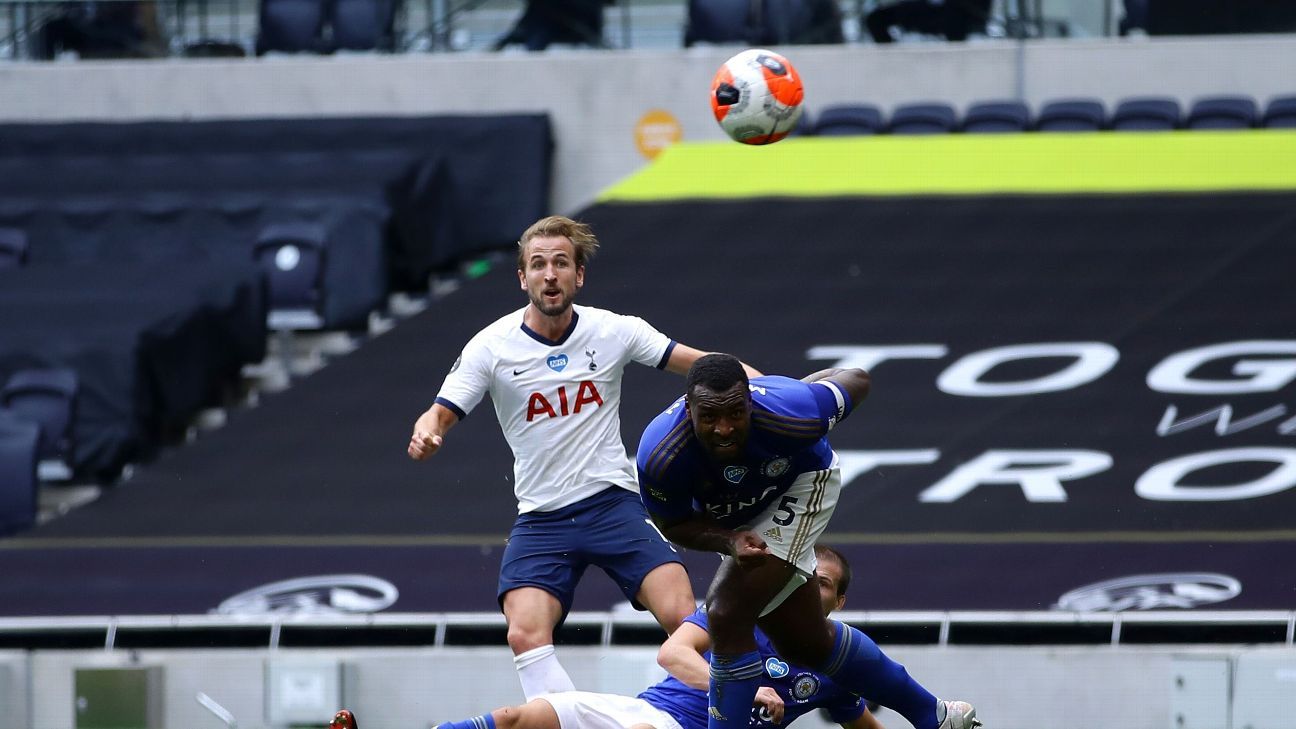 Tottenham kept their European dream alive with a crushing 3-0 victory over a stunned Leicester side who saw their own Champions League hopes dented in the process.

Son Heung-min set Spurs on their way when his early effort was deflected into the goal by James Justin before Lucas Moura played Harry Kane in behind to double the hosts’ advantage.

The incredible Kane then put the icing on the cake with an exquisite finish to seal the win with just 40 minutes on the clock, while Jonny Evans was later fortunate not to see red for a clumsy hand into the face of the England forward.

Tottenham were nothing short of ruthless as Mourinho’s men made it nine points from nine. That was epitomised by the unplayable Harry Kane who has now struck 14 goals in 16 games against the Foxes, the latest two sending Spurs into sixth.

Despite the scoreline, Leicester were actually the better side for large spells of the first half and Spurs were still guilty of some desperate defending in the opening 45. That said, it’s hard to criticise a team that have just beaten the Premier League’s fourth-placed side 3-0.

Manager rating out of 10

8 — The Tottenham boss stuck to his guns with an unchanged XI and boy did it pay off. Spurs looked a little shaky earlier on, but they were clinical in attack and, for the most part, pretty robust at the back.

GK Hugo Lloris, 8 — The nerves seemed to be jangling as he completely misjudged a deep cross from the Leicester right, but beyond that he was excellent, thwarting Ayoze Perez and later Demarai Gray with a couple of one-handed wonder-saves.

DF Serge Aurier, 7 — Given a torrid time down the Spurs right in the early stages with Harvey Barnes in a troublesome mood, but he grew into the game as it progressed. Full credit to Aurier for showing up alongside his teammates after the tragic death of his brother earlier in the week.

DF Davinson Sanchez, 7 — Looked in trouble when Ayoze Perez had him twisting and turning like a helter-skelter, but he recovered well to block the forward’s effort on the slide. Stood up to Barnes superbly to calmly halt another dangerous burst into the box.

DF Ben Davies, 7 — Just about managed to help Lloris turn the ball around the post to keep out Vardy’s improvised back-heel from two yards and produced a faultless bit of defending to take Tielemans deep cross away from the head of a lurking Wes Morgan.

MF Moussa Sissoko, 6 — Nothing out of the ordinary on this occasion, but the France international provided some vital protection for his back four against an energetic Leicester attack.

MF Harry Winks, 7 — Just as he was against Bournemouth last weekend, Winks was the man in the right place at the right time to clear the danger after Lloris put himself in danger from a seemingly harmless cross.

MF Giovani Lo Celso, 6 — No errors, but nothing spectacular either. The Argentine worked the ball out nicely to Lucas Moura on the left in the build-up to Spurs’ second of the afternoon, but otherwise he was quiet.

FW Lucas Moura, 8 — Looked lively throughout and received as many kicks as the ball for his troubles. Slotted in Harry Kane with an excellent ball for 2-0 and picked out the same man again to wrap up a huge victory.

FW Harry Kane, 10 — This was Kane at his best. The Spurs talisman tidily unleashed Son on the left to create the chance for the opening goal and he followed that with a perfectly-timed run and finish for 2-0. He was not done and wrapped up the scoring with a sensational curling strike.

FW Son Heung-min, 8 — Gave Spurs the perfect start when his effort towards the far corner was deflected beyond a helpless Kasper Schmeichel by Justin. Always looked a threat and would have had a goal to his name if not for a super save from Schmeichel.

MF Erik Lamela, N/R — Replaced Lo Celso in the 77th minute but didn’t have much time to make an impact. His fresh legs were necessary though, with the man he replaced huffing and puffing in midfield.

MF Oliver Skipp, N/R — Came on for Winks in the dying seconds as Mourinho looked to shave a few more seconds off the clock.

MF Gedson Fernandes, NR — A reminder that there’s more than one Fernandes in the Premier League if nothing else.

FW Steven Bergwijn, NR — On for Lucas for the final 15 but the game was petering out by that point in truth.