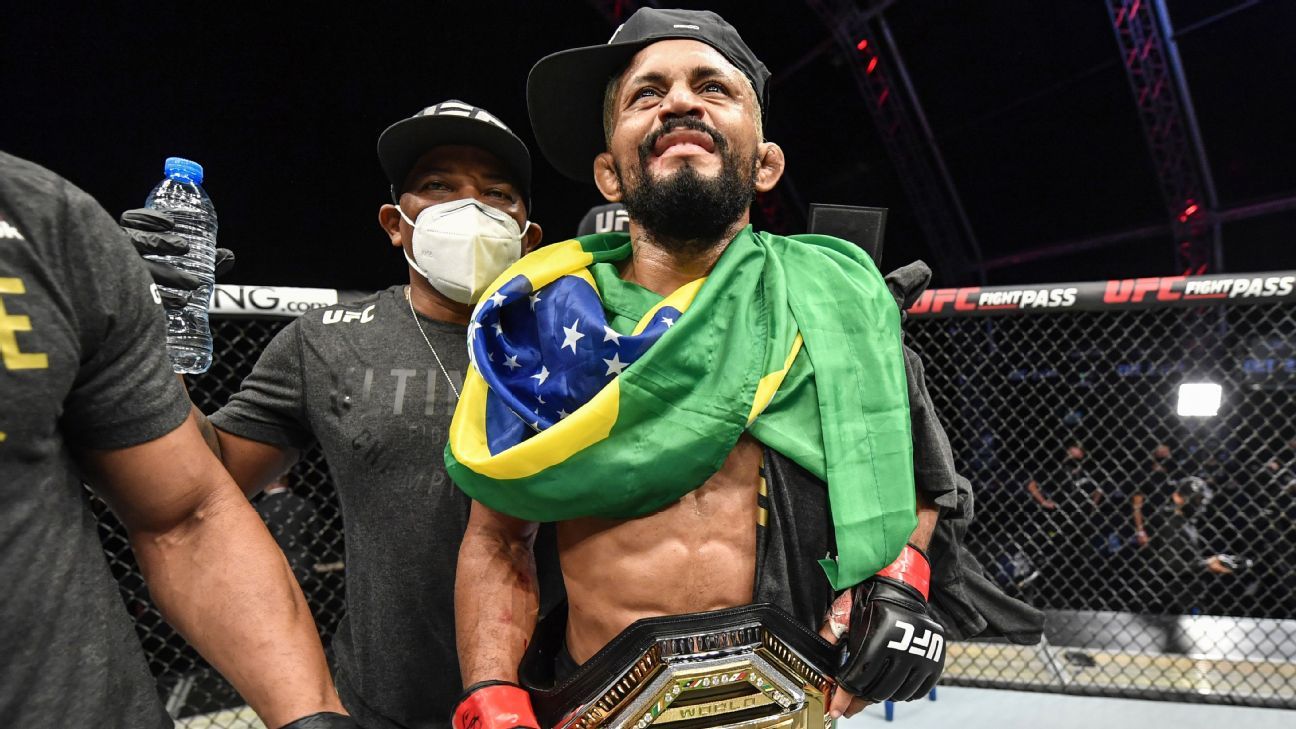 In a rematch of their controversial bout earlier this year, Figueiredo knocked down Joseph Benavidez three times and then choked him out at 4:48 of the first round in the main event of Sunday’s UFC Fight Night in Abu Dhabi. With the win, Figueiredo claimed the vacant UFC flyweight championship.

Figueiredo clipped Benavidez with a right hand in the opening seconds, then attempted to cinch in a rear-naked choke on the ground. Benavidez valiantly fought it off and got to his feet. But he could not do that a second time. Figueiredo blasted him with a whipping right hand in the final minute of the first, then pounced and locked in the submission to earn the title victory. Benavidez didn’t tap — he went unconscious and referee Marc Goddard called the fight.

“I said I was going to break Benavidez and that’s exactly what I did,” Figueiredo said. “I gave him his first submission on his record and the fight itself was a great show. I gave everyone a show. He didn’t surprise me at all tonight.”

Coming in, ESPN had Figueiredo ranked as its No. 2 MMA flyweight in the world, and Benavidez No. 3. Figueiredo is now just the third flyweight champion in UFC history, following the legendary Demetrious Johnson and the recently retired former double champ Henry Cejudo.

Benavidez and Figueiredo first fought on Feb. 29 in Norfolk, Virginia. The bout was supposed to decide the vacant title, but Figueiredo missed weight by 2.5 pounds. Due to the weight miss, Benavidez was the only one who could win the belt in the fight — but Figueiredo ended up stopping Benavidez by TKO in the second round.

There was some dispute there, too. Figueiredo’s finish came right after a clash of heads that rocked Benavidez, who had won the first round. The circumstances led to the UFC granting Benavidez an immediate rematch.

Sunday’s bout took place at the recently constructed Flash Forum on Yas Island, which has been dubbed “Fight Island” by the UFC for this month’s slate of events in Abu Dhabi. This was the third UFC card at the venue in eight days, with one more coming July 25.

Figueiredo had a strange road over the past two weeks. He initially tested positive for COVID-19 before leaving his native Brazil, and did not get on the UFC charter flying out of Sao Paulo. On July 11, he was tested again, the result came back as negative and he took a flight out last Sunday night to Abu Dhabi.

Once on Yas Island, Figueiredo passed several more COVID-19 tests and got cleared by the UFC. He successfully made weight — unlike before the first bout with Benavidez — on Friday, just hours after he was released from quarantine.

“I was able to overcome all that,” Figueiredo said. “I was able to come in here, and I’m the champion now; it’s going to be a very hard time for anyone that comes after me.”

Since Figueiredo’s UFC debut in 2017, he has the most wins (8) and the most finishes (6) in the flyweight division, according to ESPN Stats & Information research.

Benavidez was able to survive Figueiredo’s early onslaught. Figueiredo dropped him with a right hand behind the ear initially and then tried to get him in a choke on the mat. Benavidez somehow fought off the choke attempt and got to his feet with 2:16 remaining in the round.

Once standing up, Benavidez mounted some offense. He landed a four-punch combination, then a body shot and hard right. But Figueiredo dropped him again with a right. Benavidez got to his feet, but seconds later Figueiredo put him down for the final time, then choked him out. It was the first submission loss of Benavidez’s 14-year career.

“I also wanted to put that first submission loss on his record,” Figueiredo said. “I finished him in the first round. That’s exactly what happened.”

Figueiredo (19-1) is one of the best finishers in the history of a division not known for finishes. The Brazilian has six stoppages in eight UFC wins and has won four straight overall. Figueiredo, 32, has just one loss in his career, to countryman Jussier Formiga in 2019.

Benavidez (28-7) is one of the best MMA flyweight fighters of all time and a fan favorite, with many rooting for him to finally win the belt that had eluded him three times previously. The Las Vegas resident competed in the first UFC flyweight title fight, falling to Johnson — who went on to become the longtime champion — in 2012.

Benavidez, 35, is tied for the most wins in UFC flyweight history (13, with Johnson), has the most fights in the division (18) and the most knockouts (5).

Cejudo vacated the UFC flyweight title last December when he made it clear he was focusing on defending his second belt, the bantamweight title.

“I’m available for whoever the UFC wants to put in front of me. Anyone at my level,” Figueiredo said. “But you have to be at my level, because I’m a knockout artist, I’m going to knock you out. I’m going home tomorrow, and we’re going to start celebrating with all Brazilians on the flight back, and as soon as I land in Brazil everyone is going to be taking pictures and congratulating me, so it’s going to be a great party.”