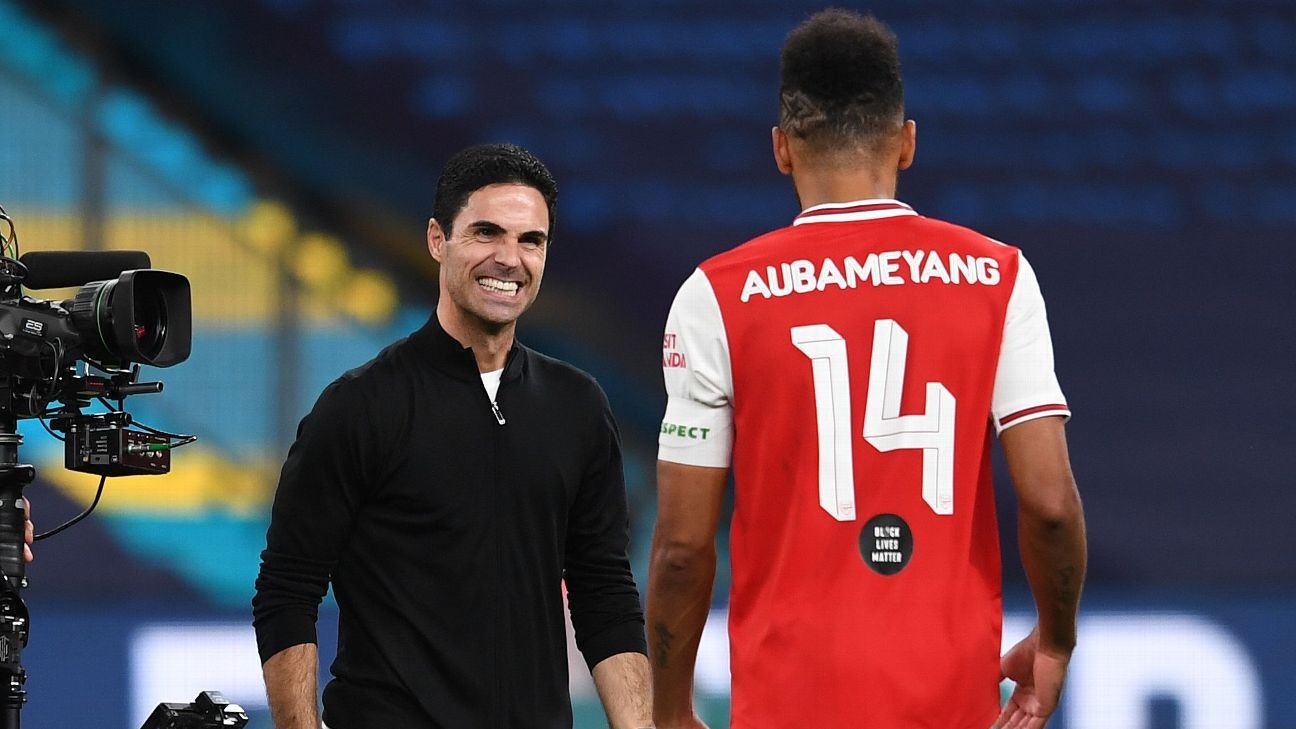 LONDON — Imagine how good Arsenal could be if Mikel Arteta gets the financial backing he called for this week. The Spaniard used the buoyancy created by Wednesday’s unexpected victory over Premier League champions Liverpool to highlight an “enormous” gap to the top two in England, suggesting “there is no magic” to squad improvement beyond heavy investment.

What Arteta managed here wasn’t far short. There aren’t many people in world football with a more intimate knowledge of Pep Guardiola’s tactical approach than the 38-year-old, given he spent more than three years as a coach under him at City, yet few thought the apprentice would defeat the master given the tools at each man’s disposal.

It is worth remembering this is only Arteta’s 25th game in management. Had Jose Mourinho or Diego Simeone pulled off a counter-attacking masterclass in an FA Cup semifinal, either would have been lauded for their tactical nous honed through years of experience.

Arsenal beat Manchester City 2-0 in a manner unrecognisable from previous meetings between the clubs dating back to their victory by the same scoreline in January 2015. That day, Arsene Wenger was credited for finally abandoning the same open, expansive style for a more pragmatic approach. It proved to be a false dawn but Arteta has now managed it for the second time in four days. These are strange circumstances, of course, with Liverpool playing for statistics and City focused on the Champions League, but the Gunners have beaten the best two teams in England in the same week by exhibiting the kind of commitment, focus and discipline many of the component parts have often lacked.

David Luiz was comically bad when these two sides met last month, coming off the bench to gift City two goals and get himself sent off. In his role as a Sky Sports pundit, Jamie Carragher claimed Luiz had no future at Arsenal. He was arguably man of the match this evening, leading a rearguard action reminiscent of Per Mertesacker’s display against Chelsea in the 2017 FA Cup final.

“David doesn’t need a lot of management,” Arteta told ESPN. “What he needs is that we trust him and we don’t doubt about what he can do, and the best way to do that is to make him play. He has done it through his career, he has had some difficult moments and some incredible moments, but big athletes go through those moments and I am happy he is at the level he is playing at now.”

Granit Xhaka and Dani Ceballos worked tirelessly in midfield to screen a back five and help transition when City lost possession. Xhaka’s Arsenal career looked over when he was stripped of the captaincy in November after an abusive exchange with Arsenal supporters in a match against Crystal Palace at Emirates Stadium. It might be a stretch to suggest the absence of supporters is therefore helping him but his vocal, organising presence is easier to hear in empty stadiums, and matches like this show why Wenger signed him, Unai Emery captained him and Arteta gave him the chance to revive his season.

Ceballos is on loan and is believed to prefer rejoining Real Madrid to have another crack at establishing himself at the Bernabeu, but he looks every inch an Arsenal player at the moment, one Arteta clearly wants to keep on a permanent basis. Ainsley Maitland-Niles was utilised as a left wing-back, a decision that may have been considered farcical during Emery’s reign yet here it contributed to collective success.

Arsenal are weighing up the financial ramifications of the season’s conclusions before committing funds in the marketplace. Arteta is not at loggerheads with the club’s powerbrokers but, as any head coach would, he is pushing for maximum investment to help restore the Gunners to former glories.

“We are having a lot of internal conversations,” said Arteta. “We are all on the same page. We always agree with the plan we have in place. Communication is always really clear and loud. It is about the possibilities that we are going to have and at the moment we have some uncertainties. The way we finish the season, if we in Europe, if we win [the FA Cup], it will help because financially we will be stronger and that is where we have to be a little bit patient.”

Results like this strengthen his argument no end. Arsenal look coached. Wenger’s laissez-faire style promoted freedom of expression but lacked the structure Emery was appointed to deliver. Arteta is managing to align both, with Pierre-Emerick Aubameyang scoring two wonderful goals 19 minutes in and 19 minutes from the end.

The first was a superb half-volley stab across Ederson from Nicolas Pepe’s cross, the second came after collecting Kieran Tierney’s fine pass and slotting a low finish underneath the City goalkeeper. There is a financial gamble in offering a 31-year-old the three-year, £250,000-a-week deal he wants, but Arteta bringing the best out of Aubameyang like this will make that risk feel less daunting.

City improved after half-time, pinning Arsenal back in their own box for long periods but Emiliano Martinez was not unduly exerted. This was perhaps a wake-up call for Guardiola, who is supposed to be masterminding his side peaking for the competitions they can win.

With the league already essentially lost prior to last month’s restart, retaining the FA Cup was viewed as a stepping stone to the Champions League next month. That latter competition remains the Holy Grail for Guardiola, and there is every chance a team this talented will indeed deliver when it matters most, but there are more doubts about them now than there should be, even with a 2-1 lead against Real Madrid from their round-of-16 first-leg clash in February.

“I don’t have to tell them, they have to know it — we felt it,” Guardiola said. “We know the standards that we have to be at in these kind of competitions and maybe we will learn it, maybe not. The last game against Bournemouth was not good and today the first half was not good.

“We struggled to play at our level. It doesn’t take a genius to realise we have to raise our standards against Madrid if we want to have any chance to go through.”

Before then, Arsenal will have the chance to win a trophy representing tangible progress in Arteta’s first season. It would enhance the case for spending, too.