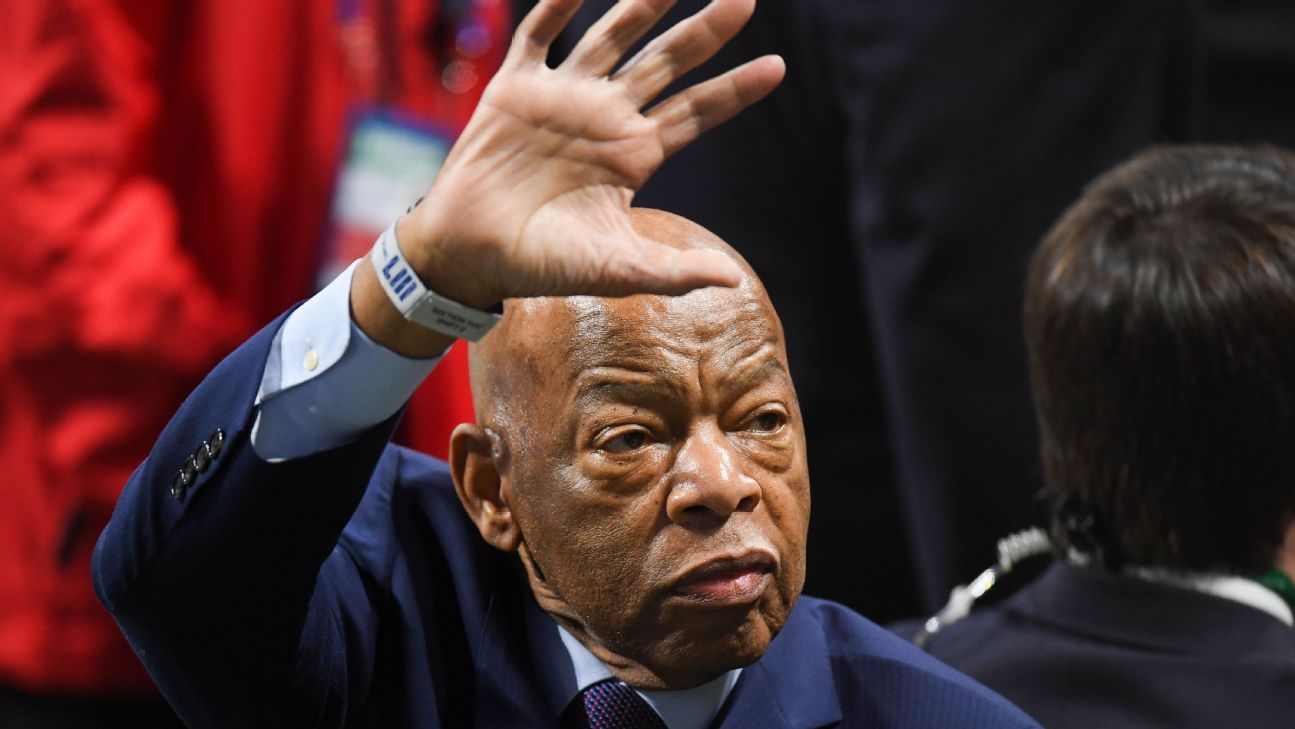 As the NBA mourned the death of the civil rights icon and longtime U.S. congressman on Saturday morning, Rivers reflected on Lewis’ life spent fighting for civil rights, equal justice and freedom, and how carrying on his legacy now is vital with the upcoming election.

“Really sad day for our country,” Rivers said before practice Saturday. “What is amazing is when you think of right now, some of the stuff that John Lewis was fighting for, we’re still fighting for. Voter suppression right now is at an all-time high.

Rivers was one of many in the NBA community who paid tribute to Lewis, the civil rights legend who died Friday night of pancreatic cancer at 80. Lewis, who had his skull fractured by an Alabama state trooper on the Edmund Pettus Bridge in Selma during a march for voting rights to Montgomery, was the last surviving speaker from the March on Washington in 1963.

Arthur Blank, the owner of the NFL’s Atlanta Falcons, called Lewis a “dear friend” and “a true American icon.”

“Freedom fighter are words that were rightly associated with John all his life,” Blank said in his statement. “… John wore the scars of a brutal 1965 beating he received while leading the history-changing ‘Bloody Sunday’ march in Selma — to those honored to know him, it was always a reminder that freedom isn’t free. John risked his life to end legalized racial segregation and make America a better place for us and future generations. That’s the enduring legacy of one of the most courageous people I ever met. May he rest well and at peace after such a meaningful, purpose-filled life.”

The NBA, NFL and NHL also issued statements in remembrance of Lewis.

“The NBA Family mourns the passing of Rep. John Lewis, a great American hero and icon of the civil rights movement and the fight for equality who helped galvanize opposition to racial segregation and social injustice,” the league said in a statement.

Said NFL commissioner Roger Goodell: “[Lewis’] leadership and courage helped to transform our nation, making it more just. … [We celebrate] his full life, his storied journey and his unparalleled legacy.”

Pro Basketball Hall of Famer Kareem Abdul-Jabbar was one of many to post on Twitter about Lewis, saying he was so emotional shaking Lewis’ hand when they met the first time “because it was such an important life event for me.”

John Lewis dedicated his life to advancing our community and fought tirelessly for justice and equal treatment. It is because of his unwillingness to back down to discrimination and injustice that we have gotten this far.

We mourn the loss of Congressman John Lewis. Last night, our city and country lost one of its heroes and most important civil rights icons who was highly regarded for his nearly six decades of social activism and getting into ‘good trouble’.

“When you see something that is not right, not just, not fair, you have a moral obligation to say something.”

Rest In Peace, John Lewis. Thank you for showing us what #GoodTrouble looks like. pic.twitter.com/heZpEeLOUn

“Today is a sad day in that we lost two of the most powerful activists we ever had: C.T. Vivian and John Lewis. The impact they had on America I think, is unbelievable,” said Thunder guard Chris Paul, who is the NBPA president. “For me as a Black man, this is more important for me to do my job better as a parent.

“I think a lot of times, people look at us athletes as heroes — what we can do in terms of dunking a basketball or throwing a touchdown. But things [Lewis and Vivian] did as human beings … John Lewis was one of the original 13 Freedom Riders. Youngest speaker at the March in Washington. Did the walk from Selma to Montgomery. All of these things I don’t think we do enough learning and teaching about. That’s a lot. That’s my truth. I think that’s more important than any of the stuff that’s going on down here.”

Baseball Hall of Famer Hank Aaron said he and Lewis “connected to the roots” and that “we have lost a giant of a man.”

Los Angeles Lakers star Dwight Howard said he met Lewis several times when he was a child through a family connection. His uncle, Paul Howard, is the Fulton County District Attorney in Georgia.

“I want to send out my condolences to his family and everyone that was affected by his loss,” Howard said. “There’s a time and a place for everything. Yesterday was his time to transition. You understand how difficult that is. … I think we should celebrate his life and everything that he stood for, everything that he fought for, and how he represented us as Black people as well as he did.

“I’d like to send my condolences to his family. … May his spirit rest in peace and his voice and all the things he stood for never be forgotten.”

Rivers recalled one moment with Lewis that will stay with the Clippers coach for the rest of his life.

While playing for the Atlanta Hawks in 1990, Rivers joined Lewis on Andrew Young’s campaign trail to Albany, Georgia. Young, the former mayor of Atlanta and ambassador to the United Nations, was running for governor of Georgia.

“Andrew Young gave a speech at an all-white church,” Rivers said. “He was fantastic. It was an absolutely amazing speech. The crowd was going crazy. We get on the plane and Andrew Young says, ‘Young Doc, what did you think of the speech?’ I jokingly said, ‘Well, Mr. Young, I thought the speech was great. But I don’t think you’re getting one vote from that church.’

“Everybody started laughing. And John Lewis piped in and says, ‘Well, we are not trying to get all of them. We are just trying to get one at a time. And eventually it will be all of ’em.’ I thought that was one powerful statement.”