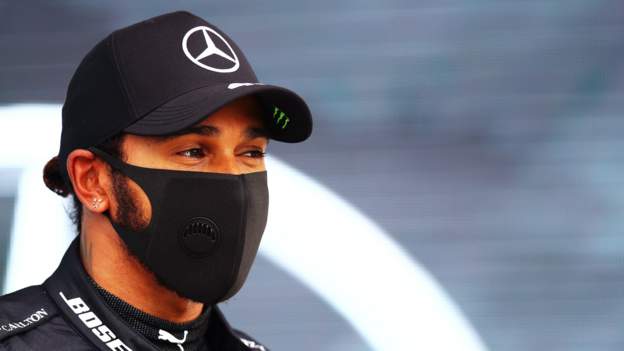 Mercedes were in a league of their own – Hamilton beat Bottas by 0.181 seconds while Racing Point’s Lance Stroll in third was 0.93secs off the pace.

Lando Norris, third in the championship after two impressive opening races, was eighth for McLaren, while George Russell put in an impressive performance for the Williams team, recovering from a dismal 2019, in 12th.

Which way did they go?

It was a sobering day for Mercedes’ rivals – the world champions have now shown unbeatable pace across two very different circuits in the opening three races of the season.

Hamilton’s pole was the 90th of his career, and in the race on Sunday he will be going for a record-equalling eighth victory at one circuit.

“I have to pinch myself,” Hamilton said. “It just doesn’t register. It is quite humbling because I get to work with an incredible group of people without who I wouldn’t have the opportunity to do so.

“Valtteri doesn’t make it easy for me at all and it requires absolute perfection when it comes doing laps and qualifying when it is like that is one of the things I enjoy most.

“The car was really nicely hooked up today.”

Bottas, who is six points ahead of Hamilton in the championship, said: “The last lap was really good. I just couldn’t go any faster.”