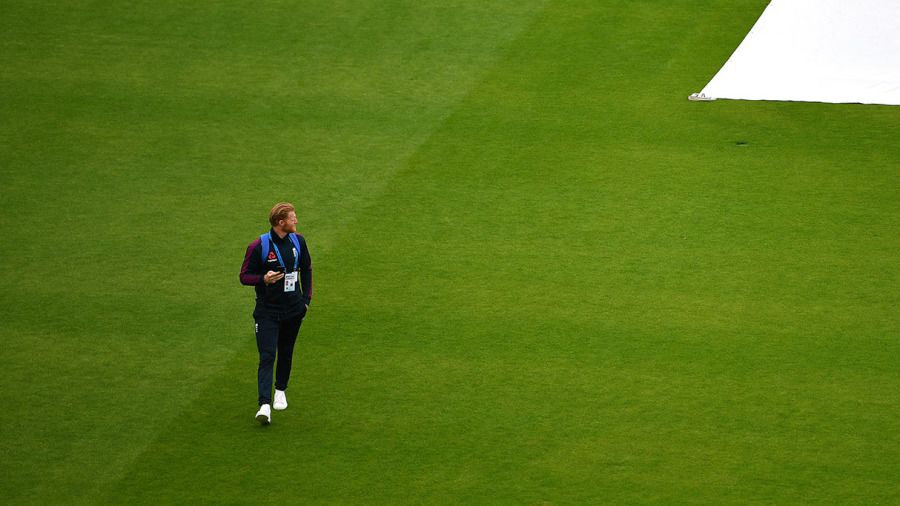 England need to take 19 wickets in two days if they are to keep their series alive against West Indies after the third day of the second Test at Emirates Old Trafford was a washout.

With finer weather forecast for Manchester on Sunday and Monday and a fresh seam attack, England’s prospects are “not ideal”, to use Ben Stokes‘ words, but they are not dire. Failure to force victory in the coming days, however, will mean West Indies retain the Wisden Trophy that they won in the Caribbean 18 months ago.

“It’s looking like we’ve got to take 19 wickets in two days,” Stokes told Sky Sports. “But the wicket has offered something throughout the whole Test so far, so we just need to make sure that we can expose that and put as many deliveries as we can, challenging their defensive shots as much as we can.”

Stuart Broad is back in the team and likely to be hungry after his consternation at being overlooked for the first Test in Southampton, which West Indies won by four wickets. He is joined by Sam Curran, who made an early breakthrough when he had opener John Campbell out lbw late on Friday to put the tourists one wicket down still trailing by 437 runs.

Chris Woakes is the other addition after England opted to rest Mark Wood and James Anderson following their efforts in the first Test and Jofra Archer was omitted on the first morning of this match for his unauthorised trip home en route to Manchester.

Archer will be available for selection for the third Test, also at Old Trafford, after a disciplinary panel fined him £15,000 and gave him a written warning for his indiscretion.

In the meantime, it will fall to Broad, Curran, Woakes and Stokes to get the job done for England, not to mention Dom Bess, who will have watched with interest as fellow offspinner Roston Chase claimed a five-wicket haul in the first innings after finding good spin and bounce.

“It’s not only offering for the seam bowlers,” Stokes said. “We’ve got the options there that we feel we can bowl West Indies out twice if we have to.”

It was Stokes’ performance with the bat that went a long way towards putting England in a commanding position at the end of the second day, his 176 combined with Dom Sibley’s 120 meant the hosts posted a first-innings 469 for 9 declared. Had England not lost the first Test, for the eighth time in ten series, their task over the next two days may not have been quite so pressurised.

“If we use the first two days as a benchmark for how we want to bat then, then the better we’re going to become,” Stokes said. “We are a very good team at bouncing back from defeats and we’ve proven that.

“If we can keep producing days and games like we generally do after a first Test then we’ll start coming closer to being the No. 1 team, which is obviously a goal of ours.

“We’re in a great place as a side. We’ve got the right personnel, the right team, the right people helping the players out right now. And I think in two or three years’ time, all the tough times that we’ve experienced – in South Africa and this first game against West Indies – is a great learning curve, not just for the younger guys in the team at the moment but also for the more experienced guys.

“If you are always learning from mistakes, it’s going to make you a better player as an individual, but also a better team.”