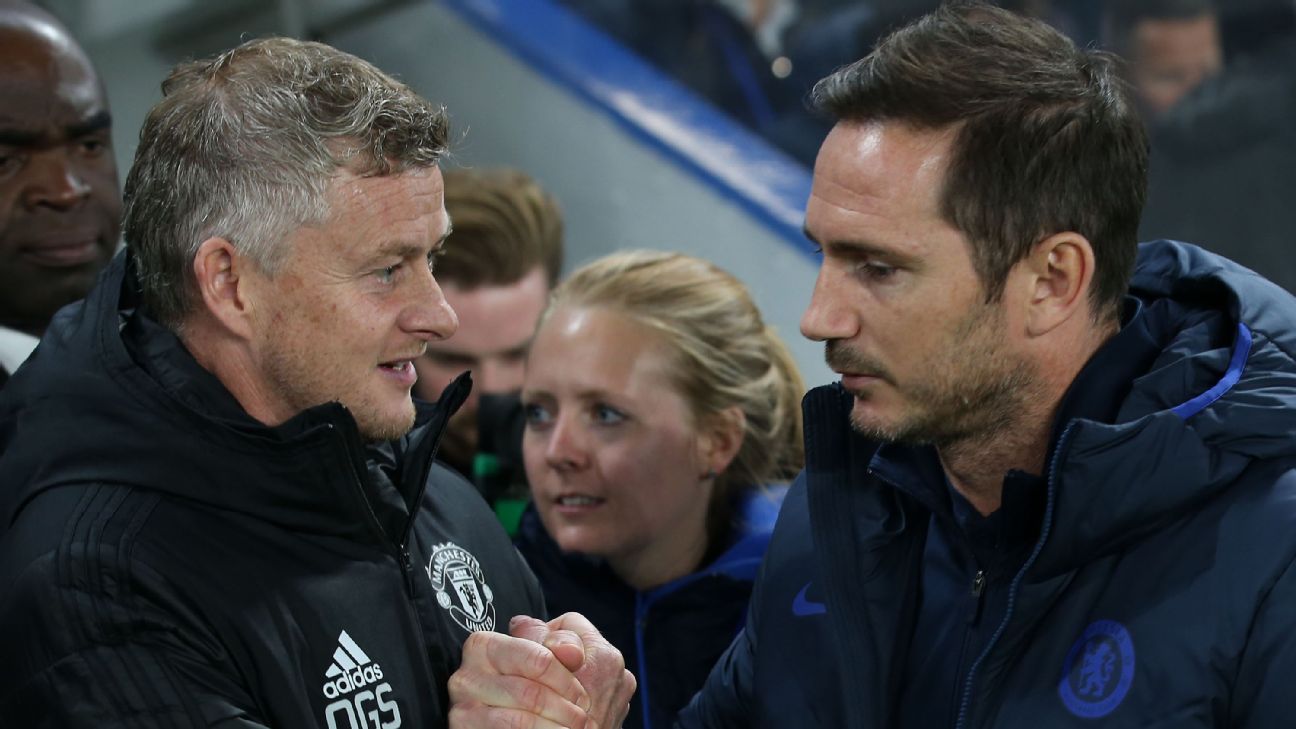 The FA Cup returns to its spiritual home this weekend, with both semifinals being played at Wembley, but in a place so laced with nostalgia, echoes of past glory and passion, it will be eerie to hear the venue silent as the four clubs chase a spot in the final. But fear not, the ties will make their own noise.

On Saturday, Mikel Arteta and his Arsenal side get a chance to knock over his old tutor Pep Guardiola, and his Manchester City side. In a week where City’s European fortunes were played out in the courts of Switzerland, Guardiola is looking to retain the FA Cup and win the seventh major title of his four-year tenure. Arteta, who has been in the job eight months, can beat his ex-boss and bring joy in a turbulent year for Arsenal.

On Sunday, Ole Gunnar Solskjaer’s Manchester United and Frank Lampard’s Chelsea go toe-to-toe at Wembley and, while both are distracted by their quests for a spot in the Premier League’s top four, neither will want to lose momentum or miss out on a spot in the FA Cup final, which takes places on Aug.1.

In the black and white brutality of modern football, ask those in the boardroom whether they’d prefer a place in the top four and Champions League football or an FA Cup and you’d expect them to come down on the side of European football. A spot in the Champions League group stage is worth £13 million alone, after all. But then, the FA Cup is still the most-prized cup in English football, has this joyous mystique and appeal and for Lampard or Solskjaer, winning the famous old gong would be a worthy feather in their cap.

Winning FA Cups, though, does not guarantee job safety — just ask Louis van Gaal, who was sacked two days after winning the 2016 FA Cup with United — and league position is still king. So as the battle for the top four intensifies and Chelsea have Liverpool and Wolves waiting in their final two matches of the season, Lampard will need to cut his cloth accordingly and ensure the FA Cup semifinal on Sunday (1 p.m. ET, stream live on ESPN+, U.S. only) does not become a stumbling block which derails their long-term mission of finishing in the top four.

The same goes for Solskjaer’s United — one point behind Chelsea in third place and equal on 62 points with Leicester in fourth. Leicester City will have their feet up this weekend, having been knocked out by Chelsea in the quarterfinals, but United will dearly want to add a lucky 13th FA Cup to their name, but equally new signings and current stars will want to be back in the Champions League next year.

So, expect to see the odd tweak here and there and ever-present scrutiny on both under-fire goalkeepers. Lampard could trial another defensive partnership and midfield combo, while Christian Pulisic will hope to continue his remarkable run of form since the restart. While for United, they might give time to those who started the season but now find themselves on the periphery of a settled XI. Either way, the teams will have one eye on their remaining two league matches while balancing their charge to the FA Cup final.

The FC crew look for ways Mikel Arteta’s squad can overcome a superior Man City side in the FA Cup semifinal.

Pupil Arteta gets a chance to see off teacher Pep

The day before Liverpool lost 2-1 to Arsenal, Jurgen Klopp was asked about the job Mikel Arteta has done at the Emirates.

“You can see the ideas, influenced by Pep,” Klopp said. “Mikel would have had the same ideas when he was a player. Arsenal are a really exciting squad.”

The NFL has a concept called the “coaching tree,” where most techniques and approaches are traced back to previous bosses or influencers and then further back until the founder of this specific philosophy is established. A similar theory is used in football — look at the new generation of German coaches and a fair few will find their roots in Helmut Gross and then Ralf Rangnick’s gegenpressing philosophy. For those who have some Barcelona DNA, like Guardiola, their outlook on football has elements taken from Johan Cruyff’s “Total Football.” And so with Arteta, who was Guardiola’s assistant at Manchester City before taking on the Arsenal job in December, there are tactical similarities with Arsenal adopting a high-press, 4-2-3-1 with defenders encouraged to pass out from the back.

So when the two meet at Wembley on Saturday (2.45 p.m. ET, stream live on ESPN+, U.S. only), it won’t be quite to the extent as the Spiderman pointing at Spiderman meme, but there will be a comfortable familiarity between the two and similarity in playing style. But of course, the key difference is in personnel and talent. Man City are far ahead of Arteta’s Arsenal, have higher-quality players in virtually every area of the field and are clear favourites to book a place in their second final in as many years but behind both teams lie different motivations.

Guardiola wants his City side to win the FA Cup for two reasons. First, the obvious goal: to keep that slab of silverware in the Etihad Stadium cabinet and have something to show for a season where they finished so far behind Liverpool. But secondly, he also wants his City side to continue driving momentum through the end of the season and into the Champions League next month.

Those old ties still run strong in Arteta. Amid all the hullabaloo over CAS overturning Man City’s Champions League ban, it was noticeable Arteta toed a different party line than Klopp or Jose Mourinho. Arteta was far more diplomatic in his take, opting to agree with CAS’ decision and back City, rather than throw scorn at his previous employers the way others did.

For Arsenal, Saturday’s semifinal is a free hit. The supporters will still be angry at losing the north London bragging rights to Tottenham, but an FA Cup final would shine a beacon of hope in yet another transitional season. It’s that old adage of Master vs. Apprentice — will Arteta do an Anakin and knock over his old tutor Obi Wan Guardiola? It’s unlikely, but little this season has gone to script.

Rarely has there been such an exciting crop of young English players coming through and now starting to state their claim for international honours. On Saturday, keep your eyes on Manchester City’s Phil Foden as he embraces the Wembley stage and continues his mission to fill the sizeable shoes left by the departing David Silva. Arsenal will hopefully have 18-year-old winger Bukayo Saka in their starting lineup, fresh off his newly signed contract.

On Sunday, Chelsea could end up fielding England youngsters Tammy Abraham, Reece James, Callum Hudson-Odoi and Mason Mount — Lampard’s approach to give youth a chance is paying dividends at Stamford Bridge. They all offer a transposition of the present and future and, with Timo Werner and Hakim Ziyech arriving ahead of next season, will want to state their claim for a starting spot.

For Manchester United, it’s all about Mason Greenwood — the ridiculously talented young striker who has a foot like a sledgehammer. His potential is frightening, and Wembley will become a second home for him once Gareth Southgate has the chance to pick him for England. Brendan Williams might also get a chance at left-back, if he has recovered from having his head split open against Southampton on Monday.

In the world’s oldest cup competition, it’s now the young guns who will be making the noise.

We are going for an all-Manchester FA Cup final on Aug. 1, with Man City knocking over Arsenal 3-1, and Manchester United edging Chelsea 2-1 with the help of extra time.