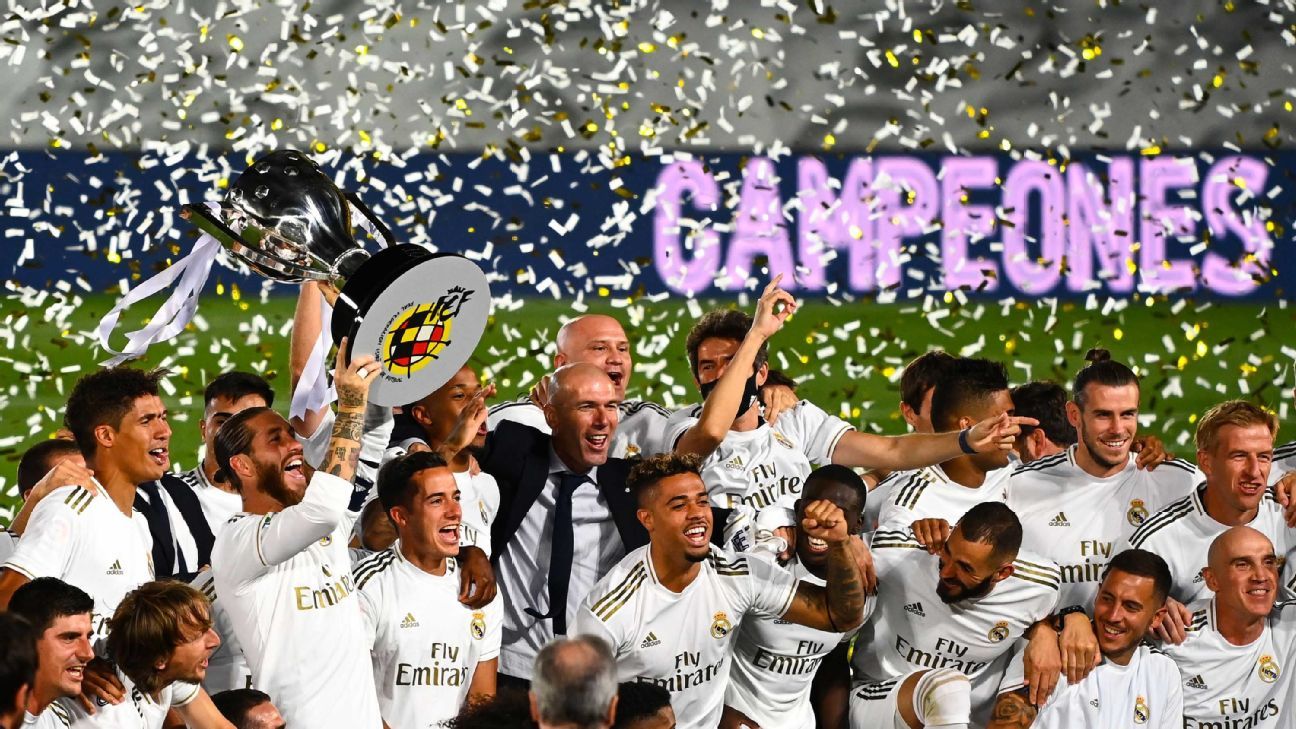 Real Madrid coach Zinedine Zidane said his side’s La Liga title win on Thursday tastes sweeter than any of the three Champions League crowns he has led them to.

Real clinched their 34th league title with a 2-1 victory over Villarreal on Thursday after winning all 10 matches since the season returned following a three-month hiatus due to the COVID-19 pandemic.

What did you miss? The latest from Europe’s top leagues

“The Champions League is the Champions League but La Liga makes me happier, because La Liga is what it’s all about,” the Frenchman told Spanish network Movistar after winning his 11th trophy as Real coach, his second league triumph.

“This is a tremendous feeling because what these players have done is incredible. I am lost for words because I am too emotional.”

This title win will not go down as Real’s most thrilling and they had to grind out a number of victories in the run-in, also riding their luck against Villarreal.

But Zidane, who also won La Liga as a Real player, would take nothing away from his side’s achievement.

“We’ve been the best because we have got the most points and that’s all there is to say. For me it’s one of my best days as a professional,” he added.

The title win was like no other for Real, who lifted the trophy at an empty Alfredo di Stefano stadium in their training ground, their temporary home while the Santiago Bernabeu undergoes renovation work.

The team will not be doing their usual open-top bus parade to the Cibeles fountain in the centre of Madrid either, in order to prevent the risk of spreading the coronavirus.

“It’s strange for everybody, we would have liked to have been with our fans at Cibeles but it’s not meant to be,” Zidane said.

“But I’m sure everyone is happy in their homes tonight. The fans always love to see the team win and we’ve done this for them.”

Club president Florentino Perez joined in the celebratory atmosphere after the match, lapping praise upon the team and Zidane whom he called “a blessing from heaven.”

“All of them were great, especially Karim who scored the goals, the goalkeeper who did well, Sergio [Ramos] who is more than a captain, Casemiro, all of them stuck together and you saw it in every game. The coach is the architect of this league,” Perez said.

“[Zidane] is a blessing from heaven. l hope he’s with us for a long time. We’ll keep winning trophies.”

Of Ramos’ status at the club, Perez added: “Sergio Ramos will be here for life… Everyone should be calm. He has been more than a captain.”

Ramos himself highlighted what a difficult season it has been due to coronavirus’ impact, but credited Zidane for keeping the team on course.

“It’s been an unusual, strange season after what we’ve been through but I think it was clear after the lockdown that we had to win all our games to have the chance to win the title, with Barca two points ahead of us. There was no margin for error in our heads,” he said.

Of Zidane, he said: “He’s key. The captain of the ship is the one who has to lead and make the difference. He’s always been a person who has put his confidence in the players which isn’t normal for all coaches. We believe in him and his work. Let’s hope that he lasts a long time and that he’s valued. He’s a unique coach.”

Information from ESPN FC correspondent Alex Kirkland and Reuters was used in this report.