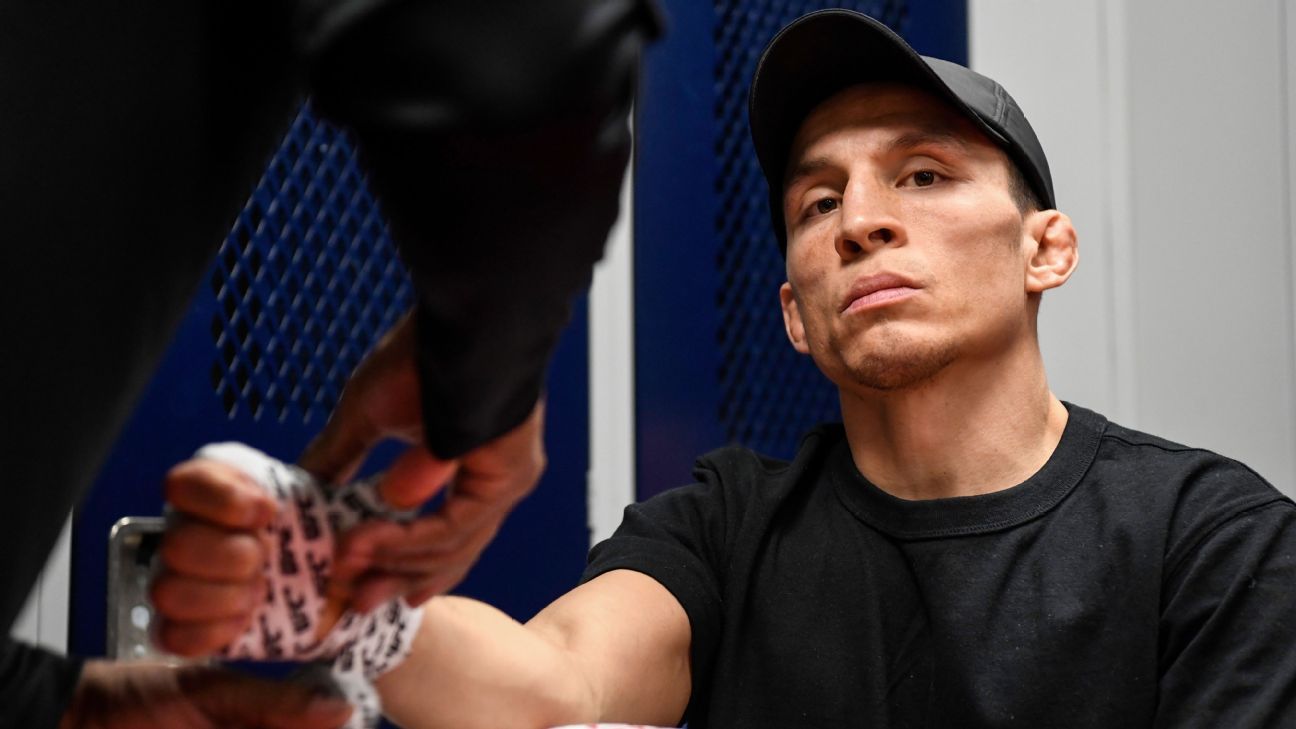 Joseph Benavidez is one of the best fighters in UFC history to have never won a championship.

Benavidez, who fights Deiveson Figueiredo for the vacant men’s flyweight title at UFC Fight Night on Saturday on Yas Island in Abu Dhabi, United Arab Emirates, is 15-4 inside the Octagon. Three of those losses have come with a title on the line. He lost to former champion Demetrious Johnson twice, in 2012 and 2013, and most recently to Figueiredo via TKO in February.

Saturday’s UFC Fight Night main event features a rematch between Deiveson Figueiredo and Joseph Benavidez for the vacant flyweight championship. They met in February for the title, but Figueiredo, who earned a stoppage win, could not claim the belt because he missed the 125-pound limit. In the co-main event, middleweights Jack Hermansson and Kelvin Gastelum will square off.

The controversy surrounding the loss to Figueiredo helped pave the way for the rematch. Figueiredo missed weight by 2.5 pounds, which meant he couldn’t be crowned champion with a win. And the fight ended on a dubious note, as the two knocked heads moments before Figueiredo knocked Benavidez out with a right hand.

So Saturday at UFC Fight Night represents another opportunity for Benavidez to accomplish something he’s spent nearly his entire life working toward. His journey has included having to fight 10 times — winning nine — in between his second and third title shots, and it also included recovering from a torn ACL that wiped out all of 2017.

The 35-year-old talked to ESPN about how the energy is different this time, and how the motivation to hurt his opponent is more personal.

ESPN has edited Benavidez’s words for brevity and clarity.

It’s really weird, because the mental side was so good last time as far as confidence, belief, all that stuff you have going into a fight, that you need to have.

I’m not a big “meant to be” guy, but I was starting to be like, “Oh, wow. That’s what it feels like” — like, everything feels really good. But this sport is different. It’s not like a race, where you know you’re going to run that time because you’re feeling that. Weird things can happen, and they definitely did. When I say I wasn’t a “meant to be” guy, I’ve almost been jaded in the sport, where I don’t believe in anything. I can feel as good as I want and the guy can feel as bad as he wants, the guy can be a villain, he can miss weight, and he still has a chance.

“What I felt after the last fight and the way it went about, not necessarily in the most fair way, it just makes me actually want to hurt him.”

It was honestly really hard mentally. I knew about the rematch pretty much right away. I was getting stitched on the table, and my manager was like, “Don’t worry, it’s not over. Obviously, the ending was terrible, the guy missed weight, all that wasn’t fair. The UFC knows that. Just heal up, don’t worry about it right now.” I knew it was on the horizon, but it was tough. It makes you not believe in anything. When you do every single thing you can do right, and then there’s still some way to mess it up. It’s almost easier when you prepare the best you can and you get really beat by a guy. You at least know that’s all I could have done.

So, that part was really hard. You’ve always got to know, and I did, that nothing is guaranteed in this sport. But moving into the fight, I feel like I’m not as excited as I would be for a title fight. And the reason being is all my excitement went into the last fight, and I feel this is almost an extension of it.

I had the video crew covering me, it was a perfect “third time’s the charm” with my third title fight. I came back from my ACL. That fight was perfect. Everything was perfect — my camp, my weight cut. The story part of it was perfect. That has a certain amount of energy you use. And this one, being with quarantine and this rematch being low-key, it’s felt great. All I do is concentrate on the fighting. That one part of energy that goes into promoting a fight, it’s kind of gone for this fight.

It feels real pure. Like back in the day when guys didn’t have Twitter or Instagram or a video crew following them. They just knew they were going to train here and they had to get there and meet the guy that day.

It’s funny when people ask, “Are you excited to fight again?” I’m like, “I was already excited to fight. I’m doing it again.” It’s like “Groundhog Day,” where I keep doing the same thing until I get it right and I get to move out of it. Honestly, the last time was better. I felt better last time, physically, mentally, everything. That doesn’t mean anything, but last time was the time for me to win. This time, when I do win, I’ll just be like, “This should have happened last time. Why did I have to go through all that heartbreak and hard stuff, when I could have just done this last time?” But I’m excited. It’s almost something I can’t wait to look back on.

I thought the last one was going to be my last title shot. When the fight ended and I was bleeding, I thought it was. I thought I had been TKO’d. And it wasn’t until later, and the mumblings and talking about the head-butt, and I was like, “Oh my god, is that what happened?” And everything started to come back. It was hard, because right before that, I was thinking this is never going to happen again. And then all of a sudden it’s “Hey don’t worry, it’s happening again.”

Persevering is a fight. That’s what a fight is. You face something, you persevere through it, you meet it head on. It was really cool last time, like, “Oh, he persevered through [having to fight 10 times and having knee surgery].” Now it’s like, “Oh, he gets another title shot.” I didn’t run through 10 guys again or have ACL surgery this time, but the emotional part was harder.

You’re always going to want to beat a person that beat you, just to prove you’re better. I could lose to the nicest guy in Demetrious Johnson, and I still want to kill him the next time, because I feel I’m better than him. And he’s nice. Figueiredo is a freaking villain. The way he went about things — he bragged in Portuguese about the fight finishing with a head-butt, and his translator didn’t translate it. Brazilian media contacted me, and they’re like, “Do you know he was talking about how he was proud that he head-butted you?”

I guess the easiest way to put it is that fighting is fighting, it goes sometimes with hurting people. That’s part of the game. You don’t want to, you just know, “I have to hurt this guy, he’s trying to hurt me.” What I felt after the last fight and the way it went about, not necessarily in the most fair way, it just makes me actually want to hurt him. Fighting is hurting people, but it makes me want to hurt him. I want you to hurt. I want you to feel dizzy when you get up every day and not know if your concussions are going to go away. I want you to freaking cry and be embarrassed and all that kind of stuff. So yeah, that is a different feeling towards this fight. Typically I don’t have that toward an opponent. I’m like, “Hey if I win, I win. If I hurt him, obviously that’s what we’re trained to do.” But for this one, that’s the difference.