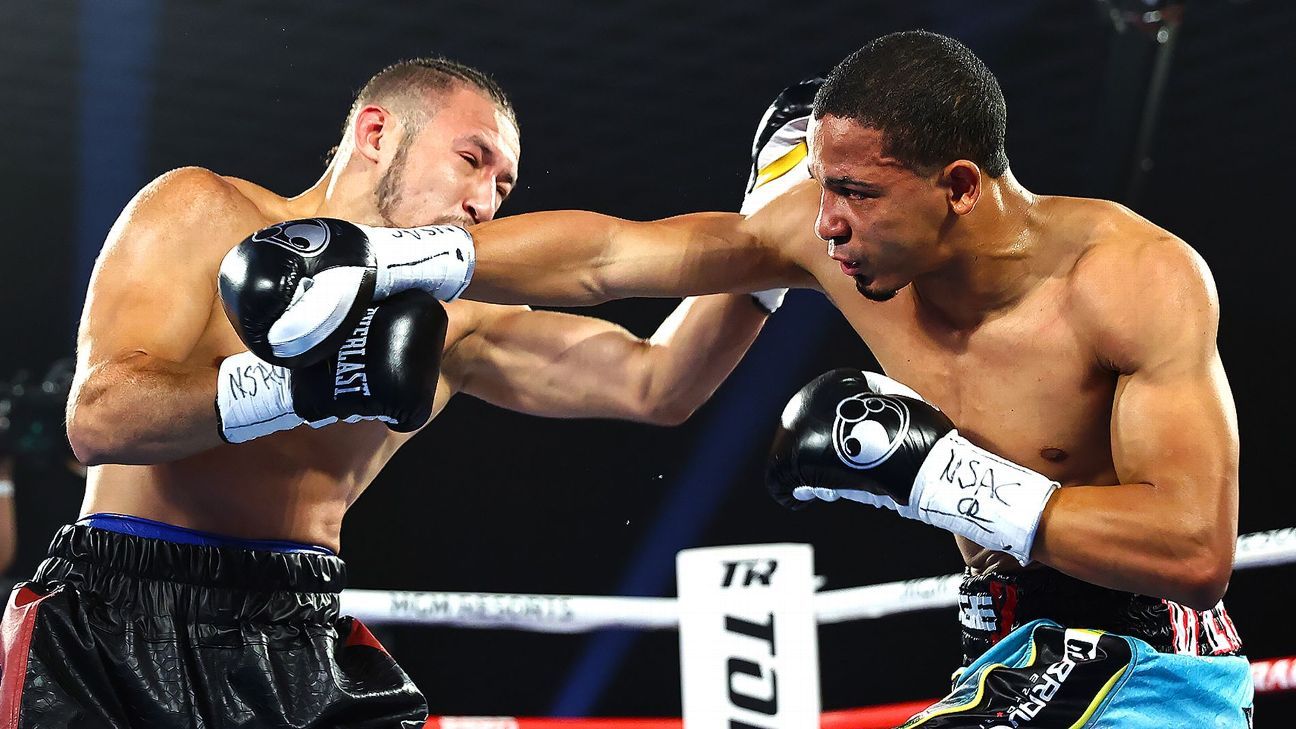 Lightweight contender Felix Verdejo delivered a message to the 135-pound division by stopping Will Madera in the first round of Thursday’s Top Rank on ESPN main event at the MGM Grand Conference Center. It was an explosive performance that reminded everybody in boxing of why Verdejo was such a highly touted prospect after the 2012 Olympics.

Verdejo (27-1, 17 KOs) first hurt Madera (15-1-3, 8 KOs) with a right uppercut, then as Madera wobbled into the corner, another uppercut hurt him again. A hard right hand and then a left uppercut sent Madera crashing to the canvas near the neutral corner.

There was no need for referee Robert Hoyle to administer the mandatory eight count. This fight was called off at 2:59 of the first round.

“I took my time, I really came out here settled,” Verdejo said of his approach to this fight. “I wanted to measure what he came out with, and how hard he hit. Once I figured that out, I did it. I just let my hands go — but always under control, and that knockout came.”

In the past, Verdejo has been tentative in punching off his front foot and taking control inside the ring. On Thursday, he showed a blend of composure and urgency. As soon as he saw Madera hurt, he didn’t hesitate to ramp up his attack and get Madera out of there in quick, eye opening fashion.

“Stay ready because Felix Verdejo is back,” said Verdejo, who was intent on sending a message to the rest of the lightweight division. “I’m ready to fight against the best.”

Verdejo, 27, called out unified champion Vasiliy Lomachenko, who defeated him in the 2012 Olympics. “We have unfinished business,” Verdejo said.

While it’s a bit unrealistic to even think about such a matchup at this point, the win against Madera was a positive step forward for Verdejo under the direction of Ismael Salas, who began working with Verdejo at the beginning of 2020.

“In terms of the technical and tactical work we did, we worked explicitly on certain things in camp. But more importantly, I was just listening to [Salas],” said Verdejo. “He told me, ‘Look, stay ready, stay calm, go out there and do what you know how to do.”

Takeaways: Make no mistake. With a stunning first-round knockout over Madera, Verdejo made his biggest statement since his lone loss in March 2018. And now it’s time to see how the once-hyped prospect stacks up against some of the top names in the lightweight division.

Madera (15-1-3, 8 KOs) was arguably the toughest opponent Verdejo (27-1, 17 KOs) has faced since the loss two years ago. But Madera made a critical mistake towards the end of the night that led to the early stoppage. With about 20 seconds left in the first round, Madera left his left jab out a little too long. Verdejo countered with a thundering left uppercut that sent Madera first stumbling backward and eventually into the corner, where Verdejo delivered the combination that ended the fight.

Thursday’s victory was Verdejo was his first stoppage since his first fight after losing to Antonio Lozada Torres. The 27-year-old Puerto Rican felt so good after dispatching Madera that he called out Vasiliy Lomachenko, ESPN’s top pound-for-pound fighter and No. 1 lightweight.

At this point, that’s a significant request. Verdejo still hasn’t been a true contender and needs to test himself against many of the notable names at 135 pounds before challenging for a title. A bout against fellow Puerto Rican Alberto Machado (22-2, 18 KOs) could be really fascinating if both men are up for it. — Ben Baby

Lets make this clear — Verdejo is supposed to be beat a guy like Will Madera. But not many expected him to do so in the quick fashion that he did. How you win in this sport is sometimes every bit as important as the end result.

Since around 2015, even as Verdejo was undefeated and notching one victory after another, there was something missing. It was hard to pinpoint, but his bouts became long and monotonous affairs that were often times devoid of anything noteworthy.

In victory, he wasn’t exactly conjuring up memories of Felix Trinidad or Miguel Cotto.

It was clear that his progress had hit a wall. Once a blue-chip value as he came out of the 2012 Olympics, Verdejo became a penny stock after he was stopped by Antonio Lozado in March 2018. But under the guidance of Ismael Salas, you see what many others hoped Verdejo could be at the start. By moving out west to Las Vegas, Verdejo has a real structure and discipline that simply wasn’t there when he was training in Puerto Rico.

With Salas, he has a respected trainer with a long track record of rebuilding fighters, including Jorge Linares, Yordenis Ugas and recent addition Robeisy Ramirez. Real professional sparring will sharpen a good fighter’s tools. You could argue this move from Verdejo should’ve been made a few years prior, but better late than never. If tonight showed anything, it’s that Verdejo, who is still just 27 years old, is still worth keeping an eye on. — Steve Kim

Martino Jules remained undefeated as he scored a majority decision victory over the scrappy Aleem Jumakhonov in a hard fought eight-round featherweight contest. It was a battle of styles between the southpaw boxing of Jules, and the steady pressure of Jumakhonov.

Jules began the fight moving and boxing well, using his footwork and advantage in speed from the outside to keep Jumakhonov (8-3-2, 4 KOs) away. But when the bout was contested on the inside, Jumakhonov got the advantage. By the third round, Jumakhonov had Jules bleeding from the nose.

Many of the rounds were close, but while he wavered a bit in the middle of the fight, Jules was able to gather himself, and did just enough to win, fighting at a distance, while tying up Jumakhonov while in-close range. Jumakhonov landed some heavy overhand fights that visibly affected Jules, but could never string together a set of punches that swung momentum in his direction.

Takeaway: Thursday’s fight was one of the best kind of victories that a young prospect like Martino Jules can earn. The undefeated featherweight picked up the majority decision over Aleem Jumakhonov to remain spotless as a professional, in a bout that showed Jules has plenty of things to work on if he wants to be serious contender later in his career.

While Jules (10-0, 2 KOs) boxed well on the outside, he gave up his distance advantage too often and struggled on the inside against Jumakhonov, who found success by throwing hooks that connected. Luckily for Jules, Jumakhonov (8-3-2, 4 KOs) was unable to set those hooks up with other shots — he didn’t land a single jab in the final four rounds — and just wasn’t accurate enough to pull out a victory. According to CompuBox, Jules outlanded Jumakhonov 38.4 percent to 22.4 percent. It also didn’t help that Jumakhonov threw nearly 160 fewer punches than his opponent.

As he gains experience as a professional, Jules will gain some of the ring savvy he lacked on Thursday night. He’ll need a lot more polish whenever he fights someone of a higher caliber. But at this point in his career, a win is a win, especially during a pandemic, and any lessons learned at this stage are tremendously valuable. — Baby

It was a short and easy night for highly regarded heavyweight prospect Jared Anderson, who scored a first-round knockout of Hector Perez. Anderson, making his second appearance inside ‘”the bubble,” started quickly and let his hands go liberally early on. A chopping overhand right ultimately knocked Perez out, as referee Russell Mora waved off the fight just 1 minute, 45 seconds into the round.

Anderson (5-0, 5 KOs) is considered to be a blue-chip prospect. At just 20 years old, he has a deep amateur background and plenty of time to develop. Perez was coming off a four-fight winning streak and was expected to give Anderson some rounds. On June 16, Perez defeated Juan Torres by decision in a six-round fight.

Asked what’s in his immediate future, Anderson said, “Anybody who’s good. I want Olympians, I want former world champions, challengers, all of it, anybody I can get, really.”

Takeaway: There’s no doubt that Anderson is the best pure American heavyweight prospect at this moment. Unlike many other U.S.-based big men, he isn’t a guy who stumbled into boxing after exhausting his other athletic options. Anderson actually grew up boxing, and it shows.

Anderson made short work of Perez, which in all honesty he was expected to do. But he continues to pass the eye test.

At just 20, you can see the possibilities with Anderson. He has a deep amateur background, solid fundamentals, the requisite size at 6-foot-4, 240 pounds, and above-average athleticism. And he’s just scratching the surface. Look for Anderson to continue to be kept active, and don’t be surprised if he makes a third appearance inside “the bubble,” in August. — Kim

Kenny Davis Jr. won a hard-fought four-round majority decision over Eduardo Sanchez in a fast-paced lightweight battle. When it was all said and done, Davis came out on top by scores of 38-36, 38-36 and 37-37.

Sanchez (2-3) looked to be taking control in the second round and much of the third, until Davis struck him with a left hook to the body that sent Sanchez to one knee. Davis was fortunate not to be penalized for hitting Sanchez while he was down. After the knockdown, Davis (3-2-1) was energized and began to pick up the pace.

Davis and Sanchez battled hard for the rest of the fight, and there were times when Sanchez was the more active fighter. But down the stretch, Davis’ punches had more impact. In the fourth round, Davis was penalized by referee Robert Hoyle for losing his mouthpiece for the second time in the fight, but ultimately it didn’t cost him.

Takeaway: It was a really solid opening bout. Both men let the leather fly and there was plenty of back-and-forth between the two. Davis got his hands raised in victory, but it wasn’t without controversy.

In the third round, he turned the tide as he hit Sanchez with a left hook that floored Sanchez and sent him to one knee. It was at that point that Davis blasted him while he was down. To the credit of Sanchez, he didn’t try to win an Academy Award, but instead beat the count and fought on.

You could easily argue that Hoyle should have penalized Davis. He didn’t, but the question has to be asked: If Nevada is utilizing instant replay for knockdowns (which is a great rule), why not also use it in cases like this where fouls might have occurred? — Kim