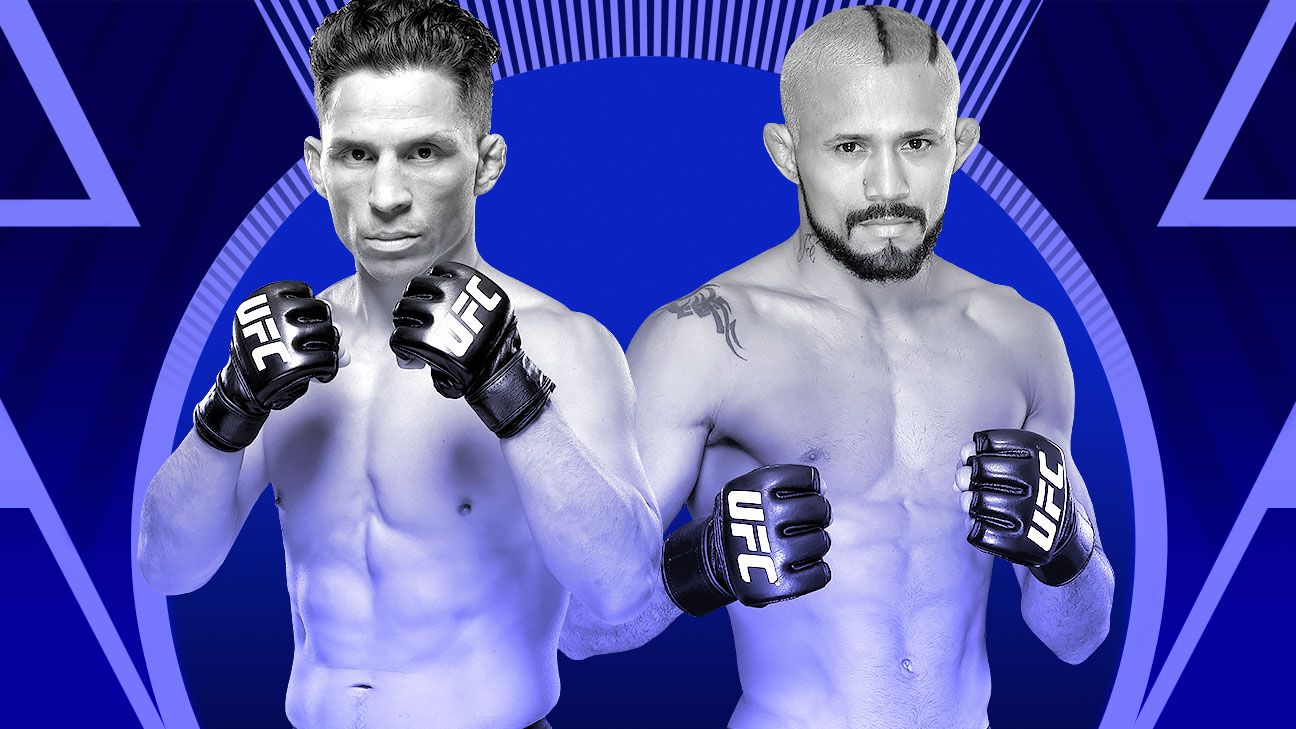 It was looking as if Joseph Benavidez might just get the job done. Early on in his Feb. 29 fight with Deiveson Figueiredo, Benavidez looked sharp. He escaped a submission threat in the opening minutes and, after getting the fight back to standing, was landing hard, straight punches that started to have an effect. Before the first round was over, Figueiredo, who had missed weight, was slowing down a little. Was Benavidez’s third shot at the UFC flyweight belt going to finally make him a champion?

The answer came less than two minutes into Round 2, and it came abruptly and harshly. As the fighters moved toward each other in an exchange of winging punches, there was a clash of heads. Benavidez took a step backward, and there was blood from a cut above his left eye. Moments later, right after Benavidez wiped blood from his face, Figueiredo came at him with an overhand right that finished the fight.

Saturday’s UFC Fight Night main event features a rematch between Deiveson Figueiredo and Joseph Benavidez for the vacant flyweight championship. They met in February for the title, but Figueiredo, who earned a stoppage win, could not claim the belt because he missed the 125-pound limit. In the co-main event, middleweights Jack Hermansson and Kelvin Gastelum will square off.

Now, less than five months later, they are at it again. Perhaps because of Figueiredo missing weight last time or perhaps because of the fluky head clash, the UFC has granted Benavidez another shot at Figueiredo and the vacant 125-pound title. The belt was vacant because of a move to bantamweight by the since-retired Henry Cejudo. This rematch headlines UFC Fight Night on Saturday in Abu Dhabi, United Arab Emirates. The main card is on ESPN+, starting at 8 p.m. ET, with prelims on ESPN and ESPN+ at 5 p.m.

It’s an odd turn of events, but the flyweight division was built for Benavidez, in a sense. A decade ago, he was an undersized mainstay at bantamweight, beating everyone other than champion Dominick Cruz. Then, in 2012, the UFC launched a four-man tournament to crown a flyweight king. That September, the final pitted Benavidez against Demetrious Johnson, who won a split decision to become the inaugural champion.

“Mighty Mouse” reigned for six years, including a first-round knockout of Benavidez in their 2013 rematch. Nonetheless, Benavidez (28-6, 15-4 in the UFC) remained the No. 2 125-pounder for years.

Figueiredo (18-1, 7-1 UFC) could have made the division his own in February if not for the weight miss. And this time he has had to overcome a different sort of obstacle. The 32-year-old Brazilian tested positive for COVID-19 on July 10, putting the fight in jeopardy, but subsequent tests came back negative. Figueiredo’s manager, Wallid Ismail, says he believes the first test was a false positive caused by Figueiredo having the virus in May.

So here they are, Figueiredo and Benavidez united again, with each man having come to Fight Island seeking to author a new chapter in his personal narrative. Time to turn the page.

2: Fighters who have been granted a UFC title shot after going 0-3 in championship bouts. Benavidez is the second, and the other is Urijah Faber, who also lost in his fourth try at a belt.

31: Significant strikes landed by Benavidez in Round 1 of the first Figueiredo fight. He connected with more than twice as many as Figueiredo (15).

0: Brazilian men who have held a UFC title since Jose Aldo was dethroned at featherweight in June 2017. Since then, Brazilian males are 1-6 in championship fights, with the only winner being Figueiredo in February (when he was ineligible to win the belt).

7: Wins by Figueiredo since his UFC debut in 2017, the most for a flyweight during that span. His five finishes also are the most for a 125-pounder since he joined the promotion.

13: Flyweight victories by Benavidez, tying him with ex-champion Demetrious Johnson for the most in division history. 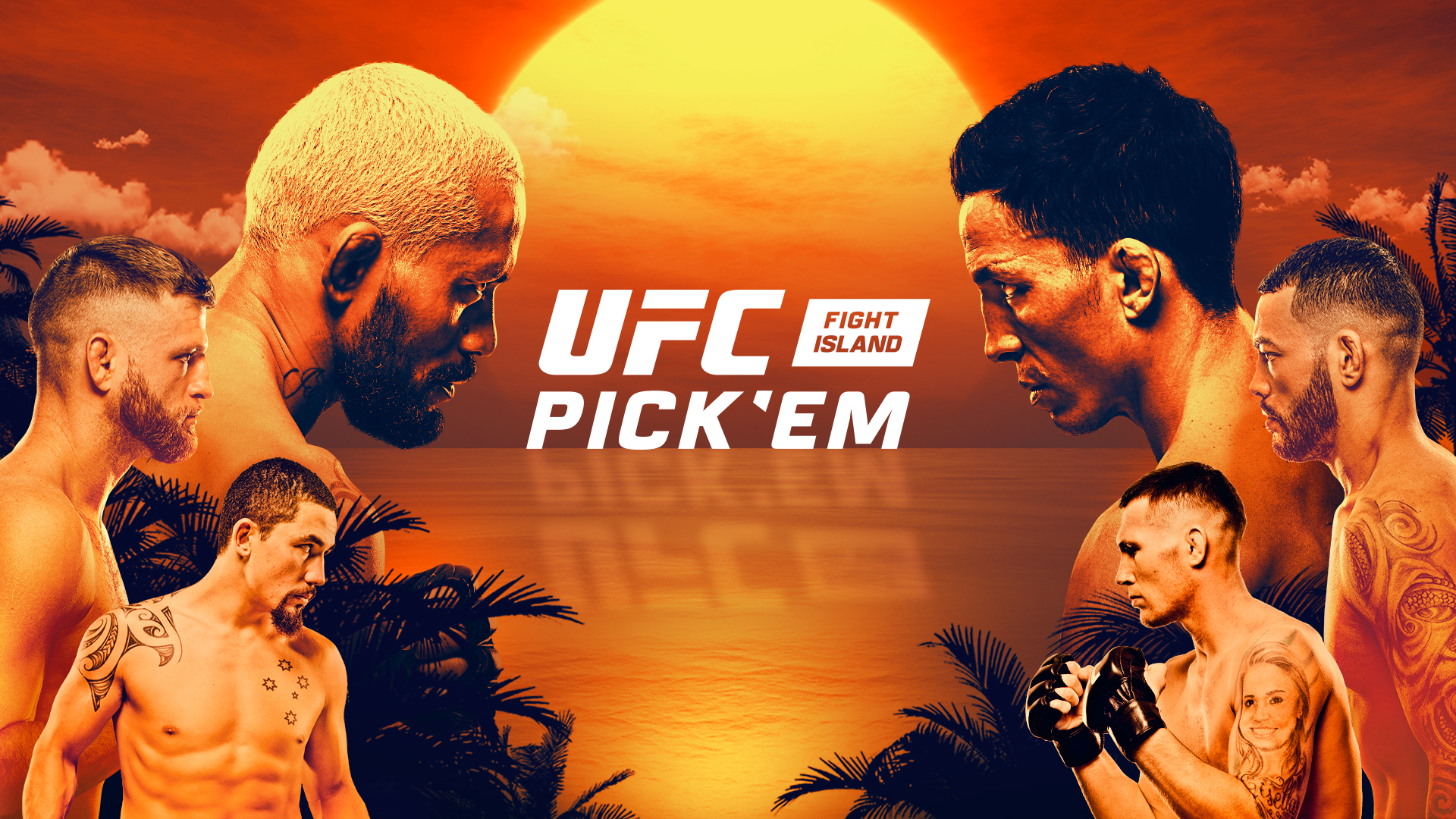 Answer questions from UFC Fight Nights on July 15, 18 and 25 LIVE on ESPN and ESPN+. Compete for your chance to win UFC 252 for FREE! Make Your Picks

Considering that Figueiredo stopped Benavidez with one devastating punch in their first meeting in February, it would make sense to lean toward the Brazilian in the rematch. But nothing makes sense in the flyweight division, which has been hanging on by a thread for years. For much of that time, Benavidez has been a clear No. 2 who could not quite get his hands on the brass ring. It’s time for that run of frustration to come to an end. Though this might be an improbable time for it to happen, that makes it an appropriate next twist for the 125-pound division. Benavidez was looking good against Figueiredo until a clash of heads left him open for that finishing punch. This time — in his fourth shot at the belt — he gets the job done. Benavidez by fourth-round TKO.

Co-main combatants looking for a turnaround

Hermansson (20-5, 7-3 in the UFC), a native of Sweden who fights out of Oslo, Norway, saw a four-fight winning streak end in September. What’s worse, the fight was in Copenhagen, in front of many of his Scandinavian fans.

Here are some reasons for hope for each man:

For Hermansson: His 2.57 strike differential is the highest in UFC middleweight history (minimum five fights) and he holds the division record for most significant strikes landed in a five-round fight (148 vs. Ronaldo “Jacare” Souza last year).

For Gastelum: This is his seventh straight main or co-main event, and he has won postfight bonuses for four of his past six bouts, including the loss to Adesanya. He’s always bringing a fight.

1. The main event is not the night’s only important flyweight fight. In the main card opener, Alexandre Pantoja, who is No. 6 in the ESPN 125-pound rankings, takes on seventh-ranked Askar Askarov, who is undefeated. Pantoja is 4-1 in his past five fights, the lone loss coming in a fight-of-the-night performance against Deiveson Figueiredo last July.

2. Ariane “Queen of Violence” Lipski has the distinction of being the only women’s flyweight champion in the history of the KSW MMA organization. Lipski won the title in May 2017 via a first-round submission and defended it twice before vacating to join the UFC.

3. In his previous fight, Montel Jackson landed 11 takedowns en route to a unanimous decision victory. That takedown total tied him for second most in a UFC bantamweight fight with Merab Dvalishvili and Jackson’s opponent on Saturday, Brett Johns. Johns did it in his UFC debut in November 2016.

5. Roman Dolidze, Malcolm Gordon, Amir Albazi and Carlos Felipe are making their UFC debuts. Fighters making their debut are 20-27 in 2020, and both previous Fight Island events have seen four fighters make their UFC debut. Before this trip to Abu Dhabi, the last time there were that many debuting fighters on a card was last August at UFC Fight Night: Andrade vs. Zhang in Shenzhen, China.