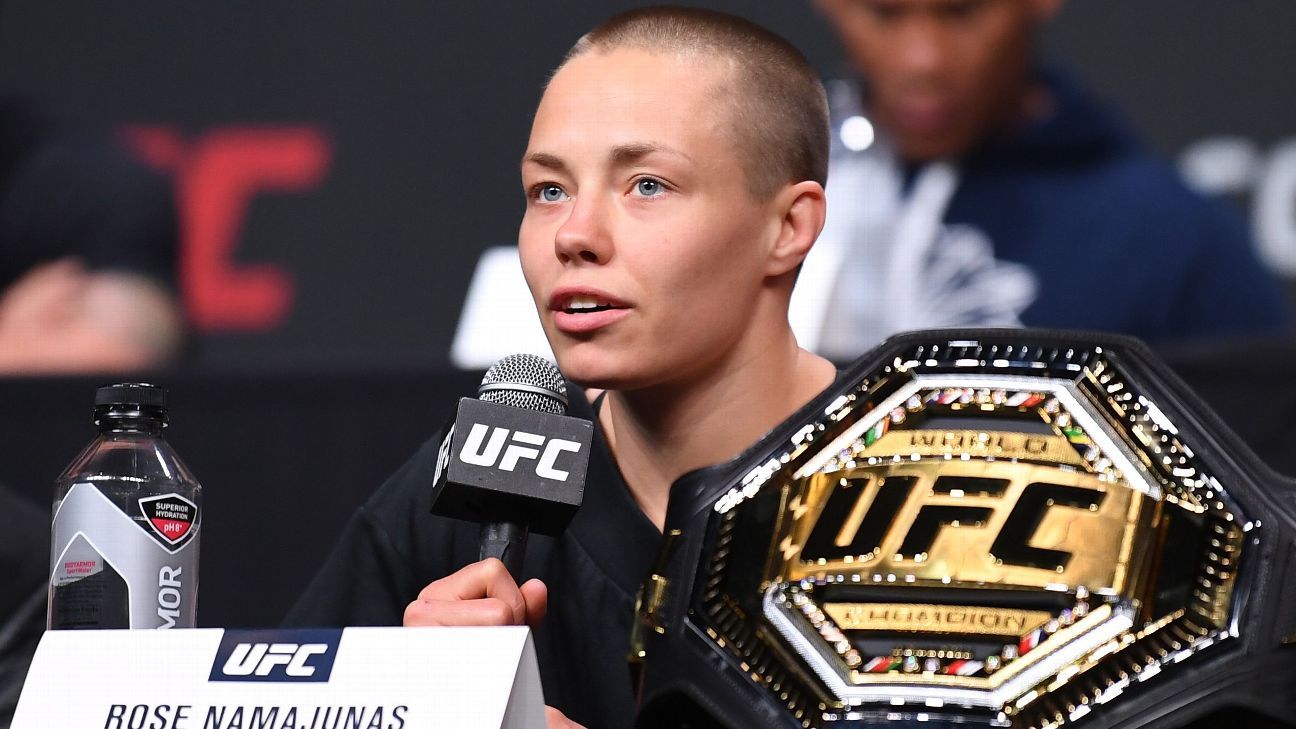 Four days removed from her victory over Jessica Andrade at UFC 251, Rose Namajunas says she is looking forward to an opportunity to fight Zhang Weili and regain the UFC strawweight championship.

The fight left Namajunas, who won by split decision, with several noticeable injuries to her face, including a broken nose, which she revealed during an appearance on Wednesday’s edition of Ariel Helwani’s MMA Show.

“That was kind of the plan going into it,” Namajunas said of a title fight against Zhang. “I just have to get this nose fixed first. I don’t know what the recovery time is.”

The broken nose was the only significant injury Namajunas left Abu Dhabi with. The severe swelling under Namajunas’ left eye went down between the time Namajunas was hospitalized postfight and when she left the country. Namajunas said the 15-hour flight home induced pressure in both her nose and eye, but that it quickly subsided when she landed.

Namajunas said she is going in for a consultation for her nose on Friday, and is unsure about recovery time. She pointed to her deviated septum as the key reason that her injury will require surgery.

But as she begins her recovery, Namajunas and her team have their attention focused squarely on a fight against Zhang.

“We know Weili’s never taken a day off, ever,” said Pat Barry, Namajunas’ fiancé and coach. “She’s training right now. She watched [the Namajunas-Andrade] fight. We don’t know what’s next, but that seems like what would be what’s next. We started game planning for that fight in the hospital an hour after the fight.”

“I would love to fight her,” said Namajunas. “She’s awesome. Really technical, really strong. That’s something that interests me a lot. Ever since I saw her fight Tecia [Torres], I’ve been scouting her out a little bit, and I think it’s just going to be a beautiful display of martial arts. She’s a master, I’m a master. It’s going to be really cool.”

As far as anything officially on paper, Namajunas and Barry have not yet discussed terms with the UFC, either before or after UFC 251. Namajunas went from the venue to the hospital after her fight, and they were then quarantined in a separate hotel room from the one they’d been staying in prior to the fight. They immediately went from that room to the airport to fly home.

“We haven’t really talked about it yet,” Namajunas said of setting up the Zhang fight with the UFC, “but that’s definitely the plan.”