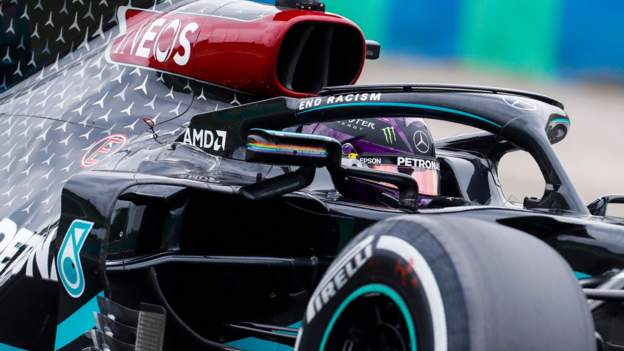 Hamilton was 0.086 seconds quicker than the Finn despite running harder tyres as Mercedes looked dominant.

Red Bull, who came to Hungary expected to pose a bigger challenge to Mercedes on this track than at the previous two races in Austria, appeared to be struggling.

Verstappen, who became involved in an on-track confrontation with Williams driver Nicholas Latifi after the Canadian blocked him, was 1.4secs off Hamilton’s pace, despite the Dutchman using the softest possible tyre and Hamilton the hardest.

Red Bull’s pace was so far off its usual level that the assumption must be that they were running in a different specification than the others.

Bottas’ fastest time was set on the medium tyre, as Mercedes split the tyres on their cars for the second runs.

Underlining Mercedes’ pace, Hamilton was quicker than any other driver subsequently managed when using the softest tyre in the first part of the session when the track was dirty and slower. That time was just 0.123secs slower than the world champion’s ultimate quickest time.

Hamilton has a chance this weekend to equal the record for most wins at a single circuit, held at the moment by Michael Schumacher, who won the French Grand Prix eight times. Hamilton has won seven times in Hungary and Canada.

Racing Point enter the weekend still without a resolution to the protest Renault lodged against their car after the last race in Austria.

Renault are arguing that Racing Point – whose car has been dubbed the ‘Pink Mercedes’ for its likeness to the 2019 world championship-winning car – have copied the designs of the brake ducts of last year’s Mercedes, which would be forbidden under the regulations.

The session was affected by intermittent light rain but it was not enough to stop the drivers being able to use dry-weather ‘slick’ tyres.

Alpha Tauri’s Pierre Gasly was unable to run at all as the team took the car apart to investigate a problem with the engine.