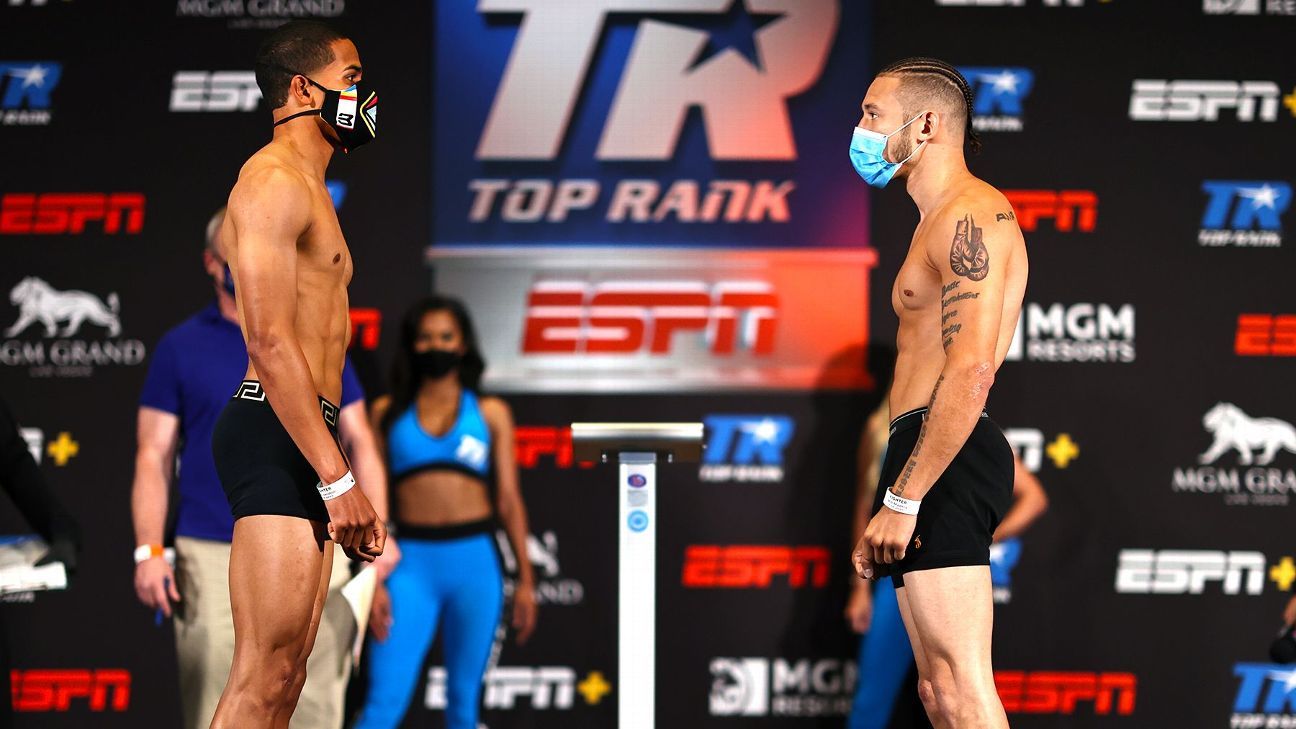 Verdejo was on his way to stardom when he suffered a motorcycle accident in his native Puerto Rico in 2016. Though he recovered quickly, Verdejo has fought only five times since the accident, before dispatching Madera.

Madera was coming off a second-round knockout victory of Edgar Ramirez in January.

Martino Jules remained undefeated as he scored a majority decision victory over the scrappy Aleem Jumakhonov in a hard fought eight-round featherweight contest. It was a battle of styles between the southpaw boxing of Jules, and the steady pressure of Jumakhonov.

Jules began the fight moving and boxing well, using his footwork and advantage in speed from the outside to keep Jumakhonov (8-3-2, 4 KOs) away. But when the bout was contested on the inside, Jumakhonov got the advantage. By the third round, Jumakhonov had Jules bleeding from the nose.

Many of the rounds were close, but while he wavered a bit in the middle of the fight, Jules was able to gather himself, and did just enough to win, fighting at a distance, while tying up Jumakhonov while in-close range. Jumakhonov landed some heavy overhand fights that visibly affected Jules, but could never string together a set of punches that swung momentum in his direction.

It was a short and easy night for highly regarded heavyweight prospect Jared Anderson, who scored a first-round knockout of Hector Perez. Anderson, making his second appearance inside ‘”the bubble,” started quickly and let his hands go liberally early on. A chopping overhand right ultimately knocked Perez out, as referee Russell Mora waved off the fight just 1 minute, 45 seconds into the round.

Anderson (5-0, 5 KOs) is considered to be a blue-chip prospect. At just 20 years old, he has a deep amateur background and plenty of time to develop. Perez was coming off a four-fight winning streak and was expected to give Anderson some rounds. On June 16, Perez defeated Juan Torres by decision in a six-round fight.

Asked what’s in his immediate future, Anderson said, “Anybody who’s good. I want Olympians, I want former world champions, challengers, all of it, anybody I can get, really.”

Takeaway: There’s no doubt that Anderson is the best pure American heavyweight prospect at this moment. Unlike many other U.S.-based big men, he isn’t a guy who stumbled into boxing after exhausting his other athletic options. Anderson actually grew up boxing, and it shows.

Anderson made short work of Perez, which in all honesty he was expected to do. But he continues to pass the eye test.

At just 20, you can see the possibilities with Anderson. He has a deep amateur background, solid fundamentals, the requisite size at 6-foot-4, 240 pounds, and above-average athleticism. And he’s just scratching the surface. Look for Anderson to continue to be kept active, and don’t be surprised if he makes a third appearance inside “the bubble,” in August.

Kenny Davis Jr. won a hard-fought four-round majority decision over Eduardo Sanchez in a fast-paced lightweight battle. When it was all said and done, Davis came out on top by scores of 38-36, 38-36 and 37-37.

Sanchez (2-3) looked to be taking control in the second round and much of the third, until Davis struck him with a left hook to the body that sent Sanchez to one knee. Davis was fortunate not to be penalized for hitting Sanchez while he was down. After the knockdown, Davis (3-2-1) was energized and began to pick up the pace.

Davis and Sanchez battled hard for the rest of the fight, and there were times when Sanchez was the more active fighter. But down the stretch, Davis’ punches had more impact. In the fourth round, Davis was penalized by referee Robert Hoyle for losing his mouthpiece for the second time in the fight, but ultimately it didn’t cost him.

Takeaway: It was a really solid opening bout. Both men let the leather fly and there was plenty of back-and-forth between the two. Davis got his hands raised in victory, but it wasn’t without controversy.

In the third round, he turned the tide as he hit Sanchez with a left hook that floored Sanchez and sent him to one knee. It was at that point that Davis blasted him while he was down. To the credit of Sanchez, he didn’t try to win an Academy Award, but instead beat the count and fought on.

You could easily argue that Hoyle should have penalized Davis. He didn’t, but the question has to be asked: If Nevada is utilizing instant replay for knockdowns (which is a great rule), why not also use it in cases like this where fouls might have occurred?