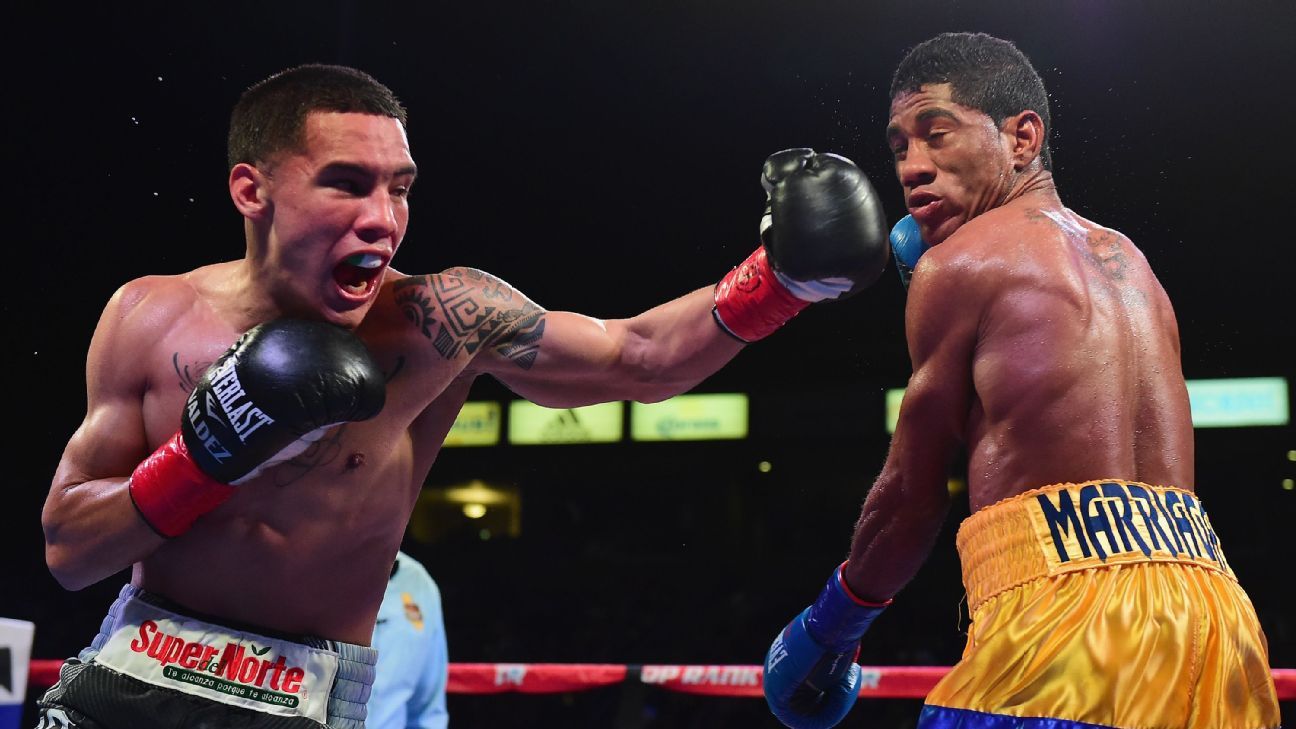 Former featherweight world titlist Oscar Valdez is set for his second fight as a full time junior lightweight, as he steps into the ring with Jayson Velez on Tuesday.

Valdez returns to action in a non-title bout against Velez inside “the bubble” at the MGM Grand Conference Center in Las Vegas (ESPN, ESPN Deportes 8 p.m. ET). With a victory, Valdez can set up a WBC junior lightweight title shot against Miguel Berchelt.

Valdez is one of several top fighters thinking about emerging from boxing’s shutdown in a different division. Former featherweight titlist Shakur Stevenson and junior featherweight Emanuel Navarrete are also pondering where their futures lie. Is this the right time to make the move up? And what are the risks and potential rewards tied to each of these fighters looking to step up a division?

Nick Parkinson and Steve Kim are here to answer some key questions about what lies ahead in the future for each of these fighters.

With Oscar Valdez moving up to 130, how do you think he will fare against the titleholders at junior lightweight?

Parkinson: Fellow Mexican rivals Leo Santa Cruz and Miguel Berchelt are the biggest fights Valdez could make, but also the biggest threats to his unbeaten record. Valdez has been linked to Berchelt (37-1, 33 KOs) , the WBC titlist, and that fight has all the ingredients of a must-watch event. I slightly favor Berchelt with his experience (he has ruled as junior lightweight king for the past three years) and knockout record at 130 pounds. Valdez was also knocked down on his 130-pound debut against Adam Lopez in November, before recovering to secure a TKO victory. Santa Cruz, a four-weight world titlist, would also be the pick over Valdez. It would be a different story if Valdez faced WBO titleholder Jamel Herring (21-2, 10 KOs) or IBF titlist Joseph Diaz Jr. (31-1, 15 KOs), both of whom have less experience than Valdez in title fights.

Kim: People seem to be down on Valdez at the moment. The consensus is that he’s permanently damaged goods coming off that harrowing experience in a victory over Scott Quigg in 2018, in which he suffered a fractured jaw. He has been a tentative fighter since then, though, and it’s only natural that he has been a bit hesitant in the first few subsequent outings.

But I haven’t given up on Valdez. His aggression and offensive arsenal make him very competitive against Herring, Diaz and Santa Cruz. Even moving up in weight, he’s a superior puncher to those guys. The only belt holder I’d make a clear favorite over Valdez is Berchelt. The two are scheduled to face each other later this year. Many are writing off Valdez, but even though I think he’s an underdog, I’m not ready to so easily dismiss his chances. There is a lot of pride involved in this fight and Valdez understands just how important this bout is to his legacy.

Should Shakur Stevenson stay at featherweight until he can make the unification fight with Josh Warrington?

Parkinson: Yes. I would have liked Stevenson to stay at featherweight and try to unify the titles. Stevenson is only 23 years old with 14 professional fights, so there is no rush to move up, especially as he is yet to make a defense of his title. Unifying featherweight titles is a logical next move for him at this stage of his career, as Stevenson has yet to establish himself as the man to beat in the division. England’s Josh Warrington (30-0, 7 KOs), the IBF titleholder, has made three title defenses, including an impressive decision win over two-weight world champion Carl Frampton in 2018. Warrington, 29, wants a high-profile fight in the U.S., and Stevenson fits the bill.

Kim: No, because this matchup simply isn’t feasible. Unfortunately, the timing just didn’t work out for this fight, and once Warrington made the decision to leave promoter Frank Warren (a close ally of Top Rank) for rival promoter Eddie Hearn, that pretty much sealed the fate of this bout. The reality is that with Stevenson still growing physically, he wasn’t long for the 126-pound division. The chance for a unification on the road would have been a great opportunity for Stevenson to maximize on a very short window as a featherweight titlist, but it wasn’t to be. Stevenson has said he simply doesn’t want to make the featherweight limit any longer.

What are some good options for Shakur Stevenson if he does move up to 130?

Parkinson: Stevenson is young enough to take risks against more experienced fighters like Santa Cruz and reigning lightweight champion Vasiliy Lomachenko, but he would start those fights as a big underdog. Berchelt has the highest knockout ratio by quite some margin among the current junior lightweight champions, and he also seems an unwise risk for Stevenson right now. Berchelt-Stevenson would be a great clash of styles, potentially a really entertaining fight, but “JoJo” Diaz, 27, and Herring would be better options for Stevenson if he is weighing up risk versus reward.

Herring’s title fight with Jonathan Oquendo was recently postponed for a second time after he tested positive for COVID-19. Herring is not as experienced as the other junior featherweight titleholders and is also promoted by Top Rank, like Stevenson. The pair know each other well as Herring has worked with Stevenson’s trainers Brian McIntyre and Jacqui Spikes in the past.

Kim: A fight against any of the belt holders at 130 would be anticipated matchups, and in the quartet of Berchelt, Herring, Diaz and Santa Cruz, you have four very distinctive styles for Stevenson to contend with. But a fight outside that quartet of titlists that excites me is a showdown against lightweight secondary titlist Gervonta “Tank” Davis, who has held a 130-pound title twice and could be facing Santa Cruz (reportedly as a junior lightweight). Now there’s a fight that would have some real heat to it. Two fiercely proud young talents who each believe that they are the future of the sport.

Do you think Emanuel Navarrete can carry his power, speed, consistency to 126? What are the two or three dream fights for him?

Kim: This is the weight where we’re going to find out about Navarrete. He was very active as the WBO champion at 122, but let’s face it, much of his success was predicated on size and activity. It will be interesting to see how that is mitigated as he faces bigger, stronger fighters. The best pure action matchup that can be made for him is against WBA “regular” featherweight titlist Xu Can, who is a punching machine. Then there is Warrington, another fighter who sets a quick, active pace. Warrington doesn’t punch hard, but he puts on consistent pressure. Both of these bouts would be entertaining battles.

Navarrete had the ability to overwhelm his foes as a junior featherweight. But he’s far from perfect technically, and again, at least some of his success had to do with favorable matchmaking.

Does Ryan Garcia deserve the big money and a title shot? Is his popularity enough?

Ryan Garcia shows off his impressive punching skills while wearing a blindfold and brings serious power for some practice punches.

Parkinson: Garcia has put himself into a great position inside and outside of the ring. He is currently one of the most marketable boxers in the sport thanks to his social media presence — 6.7 million followers on Instagram, 418,900 followers on Twitter — which he has gained through video uploads rather than his exploits in the ring. Don’t blame Garcia for being popular though — boxing needs fighters like the 21-year-old to attract a younger generation of fans, and he will soon get the chance to prove if his talent justifies the numbers he is generating. Garcia is on the brink of a world lightweight title fight, and if it is against Luke Campbell, England’s two-time world title challenger and 2012 Olympic gold medalist, we will find out if Garcia has what it takes to be a hit at the top level.

Kim: His social media presence is significant — to a degree — but the question is: How many of them translate into paying customers? It’s one thing to follow a person on that platform, but how many are actually paying consumers at your events? His last fight, a first-round KO victory over Francisco Fonseca at the Honda Center in Anaheim, California was an indication that he is a legitimate draw. To have an attendance of over 10,000 on a Friday night in Anaheim is significant. But at the same time, that number isn’t even 1% of his followers on Instagram. So what does it really mean?

With that said, he is an attraction, and he could be among the brightest stars in the sport for the next decade. Keep this in mind, he’s still just 21. But when your past two wins are against Romero Duno and Fonseca, you really haven’t “earned” (for whatever the means in boxing nowadays) a title shot. But should Garcia face Campbell, and defeat him, then yes, he absolutely deserves a title shot — and the conversation changes in terms of his market value as a fighter. Being popular is vital in determining what you’re paid, but there is also an intrinsic value to having a real résumé.

Which fighter has taken the most advantage of fighting inside of the Top Rank “bubble”?

Parkinson: Australian bantamweight Jason Moloney (21-1, 18 KOs) impressed in a methodical seventh-round stoppage win over Leonardo Baez (18-3, 9 KOs). Moloney patiently dismantled Baez, unloading thudding body shots and cut his opponent over both eyes. It was a big opportunity for Moloney to shine, and he took it. What was impressive was that it came two days after his twin brother, Andrew, suffered his first professional loss to Joshua Franco in a WBA world junior bantamweight title fight. Franco was also impressive.

Kim: Certainly Clay Collard makes a strong argument with his two wins, but I’ll go with Gabriel Muratalla, the punching preschool teacher who has notched two victories at the MGM Grand Conference Center. First, Muratalla stopped Fernando Robles in one round on June 11, and then got in four quality rounds against the tough Sergio Lopez on July 7. Top Rank has liked what it has seen, and it looks as if Collard will be signing a deal.

The 26-year-old Muratalla has shown that he’s a bantamweight prospect that not only has a great story but can fight a bit, too.