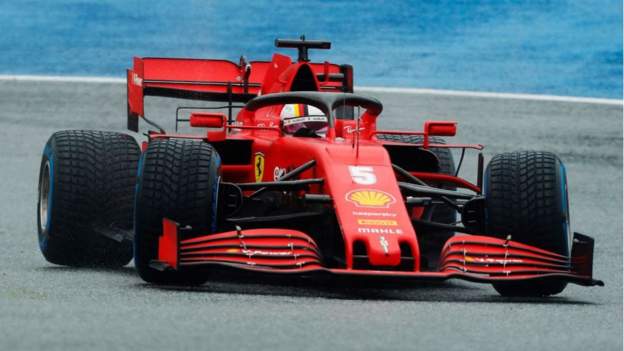 Sebastian Vettel says he is in no hurry to make a decision on his future after being linked with a move to Racing Point next season.

Germany’s Bild has reported that Vettel has been offered a contract by Racing Point boss Lawrence Stroll for 2021.

Vettel, who will leave Ferrari at the end of this season, said: “Everything is still open.

Four-time world champion Vettel added: “I am not feeling pressure to make my decision too quickly.”

Racing Point, who have emerged as a major contender this year with a car known as the ‘Pink Mercedes’ for its likeness to last year’s title-winning machine, will be renamed Aston Martin next season.

That move follows the takeover of the historic sports car manufacturer by Canadian billionaire Stroll.

Racing Point’s existing drivers are Mexican Sergio Perez, who the team announced last August had signed a new contract until the end of 2022, and Stroll’s son Lance.

Perez said on Thursday before this weekend’s Hungarian Grand Prix: “I’m with the team as far as I know. I have a contract. We will see what happens in the next weeks.”

Stroll added that he was “determined to stay here”.

But Perez stopped short of saying he would definitely be at Racing Point next year and said he had been contacted by another team since the reports about Vettel emerged.

“In F1 you never know until you start the race if you’re racing,” Perez said. “This is how things are.

“I know I have a contract. I know during the week the rumours came out and we got contacted by a team in the paddock – and I won’t say names – and also other teams in other categories, which was quite a surprise because we have a contract for next year. But at the moment it is just rumours.”

Vettel is being replaced at Ferrari by Spaniard Carlos Sainz next season and there are relatively few options open to the 33-year-old.

Mercedes in theory have two open seats, but the world champions are expected to retain both Lewis Hamilton and Valtteri Bottas next year.

And Red Bull motorsport adviser Helmut Marko and team principal Christian Horner have said publicly that there is no space for Vettel next year.

Vettel said: “At a later stage, it would get a bit more concrete. The truth is there is nothing more concrete than loose talks.

“Everyone is talking about Racing Point. The first two races have been impressive, the performance on track, but when it comes to myself there is no news, nothing that has changed within a week.

“There are two ways to look at it. One on paper – which seats there and which there are not – and for that I probably have too little information in terms of what are people’s contracts.

“But I have been around a long time and you never know. Things can always change. Irrespective of that, I need to make the decision myself and see if there is something suitable.”