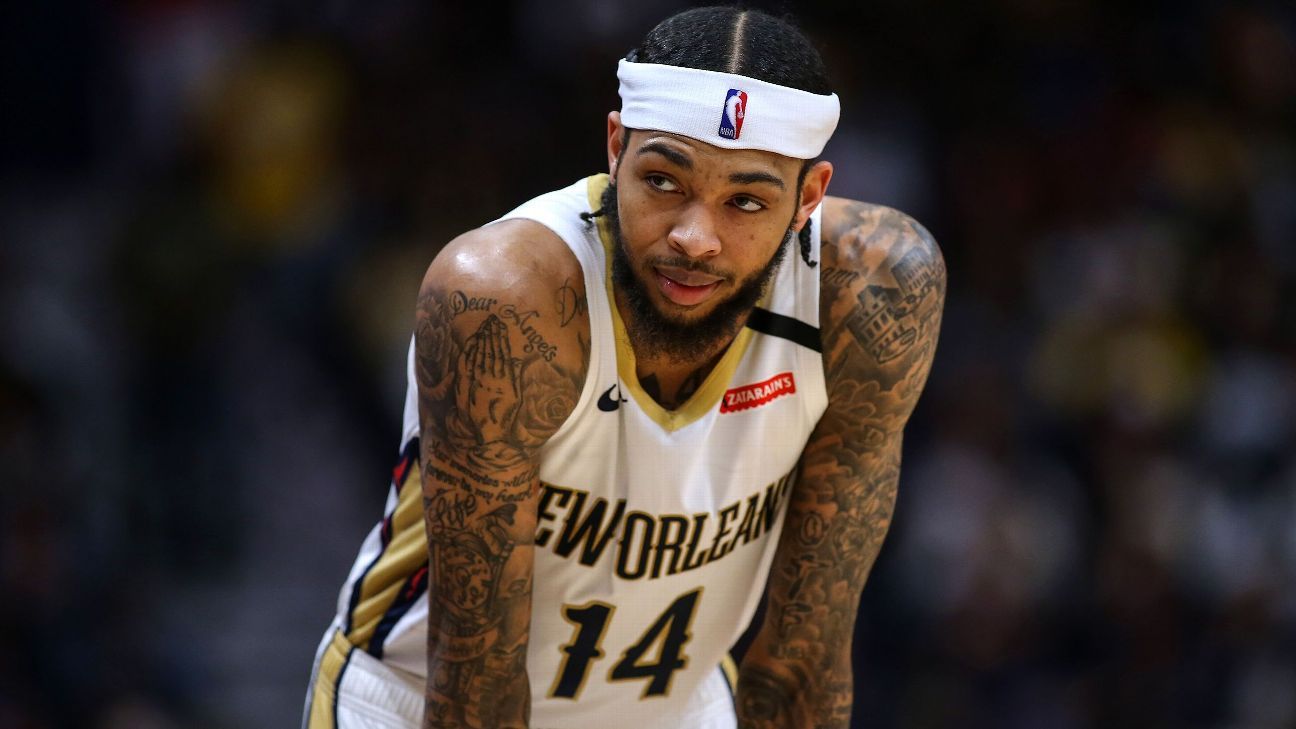 When the NBA resumes on July 30, there will be millions of dollars on the line for the 2020 free agents taking the court.

More than 150 players participating in the NBA restart are on track to hit free agency in October, and one misstep could prove costly for a player looking for a new deal. Last month, Washington Wizards forward Davis Bertan opted out of playing in the bubble so he could maximize his earning potential and avoid risking injury.

And it’s not just the players hitting free agency this fall who are worried. ESPN’s Adrian Wojnarowski reported in June that several top stars from the 2017 draft class who will be extension-eligible this fall, such as Boston Celtics wing Jayson Tatum and Utah Jazz guard Donovan Mitchell, talked to the National Basketball Players Association about possible insurance allowances.

But for most players — like New Orleans Pelicans forward Brandon Ingram — participating in Orlando is a risk they are willing to take. Here’s a look at what’s at stake, the decision-making process for players and teams and the 10 most interesting free agents to watch in Orlando.

Brandon Ingram is the face of looming free-agent challenges

With Anthony Davis likely staying put in Los Angeles, Ingram has a strong case as the top free agent in the 2020 class, hitting the market as an All-Star under the age of 25. He’s likely to receive a significant raise on his current $7 million salary, but he faces the same challenges as any free agent inside the bubble, including:

In seeking a potential max deal, Ingram also has to contend with his restricted status (giving the Pelicans a chance to match any offer sheet), his injury history and a relatively small sample of star-level play. But he told reporters on July 6 that he never considered not showing up in Orlando to protect his body.

“I didn’t look at it like I had a choice of going or not,” Ingram said. “My teammates knew that I didn’t question it. I just want to play basketball at the end of the day.”

One of the reasons Ingram was so set on playing dates back to the deep vein thrombosis scare in his right shoulder that ended his 2018-19 season with the Los Angeles Lakers.

Ingram underwent thoracic outlet decompression surgery in his right arm that March, shutting down his season after an extended stretch of efficient scoring. He was traded to New Orleans over the summer, but because of his recovery timeline, Ingram wasn’t cleared for contact until September. That prevented the Pelicans from getting a great look at him before the season started.

Ingram was heading into his fourth NBA season, which meant he was eligible for an extension off his rookie deal, but when the Pelicans wanted to see how he looked in game action before coming to terms on a new deal, Ingram found himself the victim of bad luck.

In the 2017 CBA agreement, the league moved up the deadline to agree on extensions for rookie deals from Halloween to the day before the regular season starts. Under the old rules, New Orleans would have had four games to watch Ingram — who in that stretch averaged 27.3 points, 9.5 rebounds, 4.8 assists and 1.5 blocks while posting an effective field goal percentage of 53.4%.

Ingram told ESPN in December that the message he received from the Pelicans was that they wanted to see how he recovered before making a new contract offer.

“I couldn’t do anything but respect it,” Ingram said at the time.

Sources inside the Pelicans’ front office maintain that they view Ingram as a critical building block going forward. Pelicans executive vice president of basketball operations David Griffin told reporters on June 30 that he believes Ingram and Lonzo Ball, who is extension-eligible after the season, both want to continue in New Orleans.

“We’re going to continue to work from that vantage point because they’ve been very, very clear in their desires to continue their careers here,” Griffin said.

And even with millions at stake, Ingram insists contract issues aren’t on his mind as the season resumes.

“That’s more for after the season,” Ingram said. “This season, I was so focused on being with my teammates and just playing basketball after being out the way last year went when I couldn’t finish the season. This year was about me just going out and showing where I belong and excel in this new space. I think playing in this could help me out.” — Andrew Lopez

The top free agents to watch in the restart

Despite the uncertainty surrounding league finances, a few players are still certain to get max contracts in October. Anthony Davis and Donovan Mitchell both fit that criteria. But Ingram leads a crop of free agents facing plenty of questions heading into the restart, all of whom can affect their offseason value in Orlando.

Here’s a look at the 10 most intriguing free agents still playing, plus what to expect in their offseason negotiations based on conversations with league insiders.

Because only six teams — the Atlanta Hawks, Charlotte Hornets, Detroit Pistons, Miami Heat, New York Knicks and Phoenix Suns — are projected to have cap flexibility, there is a strong likelihood that most players pick up their options for the 2020-21 season. As a result, we are leaving DeMar DeRozan, Gordon Hayward, Tim Hardaway Jr. and Mike Conley off this list.

One thing to keep an eye on is how the league projects the salary cap in 2020-21 and 2021-22. If there is a significant drop from the original $115 million projection and the Pelicans play hard ball, Ingram could decide to sign his $9.5 million one-year qualifying offer and enter free agency unrestricted in 2021.

The four-month break should prove beneficial to VanVleet. At the time of the stoppage, he had missed six games with a shoulder injury while ranking eighth in the league in minutes per game (35.8).

A strong showing in Orlando combined with his play from last year’s NBA Finals could lead to VanVleet doubling his $9.3 million salary from this past season. Ultimately, the size of VanVleet’s next deal will come down to how much the Raptors are prioritizing cap space in 2021 and if a team like the Pistons is willing to commit significant money during a rebuild.

Harrell will certainly see an increase from his $6 million salary, but how much?

Removing the Hawks (Clint Capela) and Heat (Bam Adebayo) from the list of suitors leaves Harrell with Charlotte, New York and his current LA team as real options. Will any of those three pay starter money (think north of $16 million a year) for a player who started 25 out of 318 games and ranked 44th among all power forwards in ESPN’s defensive real-plus-minus?

Harris joins Caris LeVert as the new primary scoring options for a Brooklyn team without Kyrie Irving and Spencer Dinwiddie in Orlando. In his 63 games this season, Harris scored more than 20 points only eight times. If Brooklyn is going to reach the first round of the playoffs, Harris will need to up his production.

Because the Nets are restricted financially with their payroll moving forward, Harris is a priority to re-sign this offseason, meaning a strong performance could increase the price for Brooklyn.

Expect Bogdanovic to rely on his international experience when it comes to the eight seeding games in Orlando. In the 2019 FIBA World Cup, Bogdanovic shot 53% from deep and averaged 22.9 points in eight games. In total, the 27-year-old has played in 60 games for the senior national team in Serbia.

The Kings will tender the guard a $10.6 million qualifying offer before Oct. 17 and will have the right to match any offer sheet. But after committing $94 million to Buddy Hield last October and De’Aaron Fox becoming rookie-extension eligible this offseason, how much will Sacramento be willing to spend on its backcourt?

Bogdanovic should see offers in the $14 million to 16 million range.

Augustin has seen his role change in Orlando, going from starting 81 games last season to backing up Markelle Fultz this year. If Fultz has a solid showing in Orlando, Augustin could become expendable in the offseason. But if Fultz struggles in his first postseason action, bringing back Augustin likely becomes a priority for the Magic.

While he likely won’t find the same contract that he signed in 2016 (four years, $29 million), the 32-year-old should command an annual salary of $5 million to $6 million. Orlando has $124 million in committed salary for next season and could be pressed up against the luxury tax if the line falls below the initial $139 million projection.

Gallinari rolled the dice when he balked at signing an extension that shut down a proposed trade to the Heat in February. He could have added financial security for next season but at the cost of a team option in 2021-22.

Outside of returning to OKC (likely his best option), Gallinari will face obstacles in securing a long-term deal. Five out of the six teams projected to have room are rebuilding or retooling, and the Heat are expected to save cap space for the summer of 2021.

If the Raptors have a deep playoff run, they can thank the four-month hiatus that started in mid-March. At the time of the stoppage, Gasol was injured, having missed 16 games with a left hamstring injury, and Ibaka was just returning from a three-game absence. They’ve had plenty of time to recover since then.

Gasol ($25.6 million) and Ibaka ($23.7 million) will not see the same price tag in free agency. However, if Toronto elects to reconstruct its roster in the offseason, both players will be top targets for teams looking to use the midlevel exception.

The Clippers only got a nine-game sample from Morris before the season was shut down in mid-March. In the games following his trade from New York, Morris shot 38.3% from the field and 28.3% from 3, but LA posted a plus-7.6 net rating when he was on the court.

The Clippers only have non-Bird rights on Morris, but his $15 million contract this season allows the team to extend him a deal starting at $18 million. If Harrell and Morris are retained, the Clippers will likely become a luxury-tax team for the first time since 2016-17. — Bobby Marks