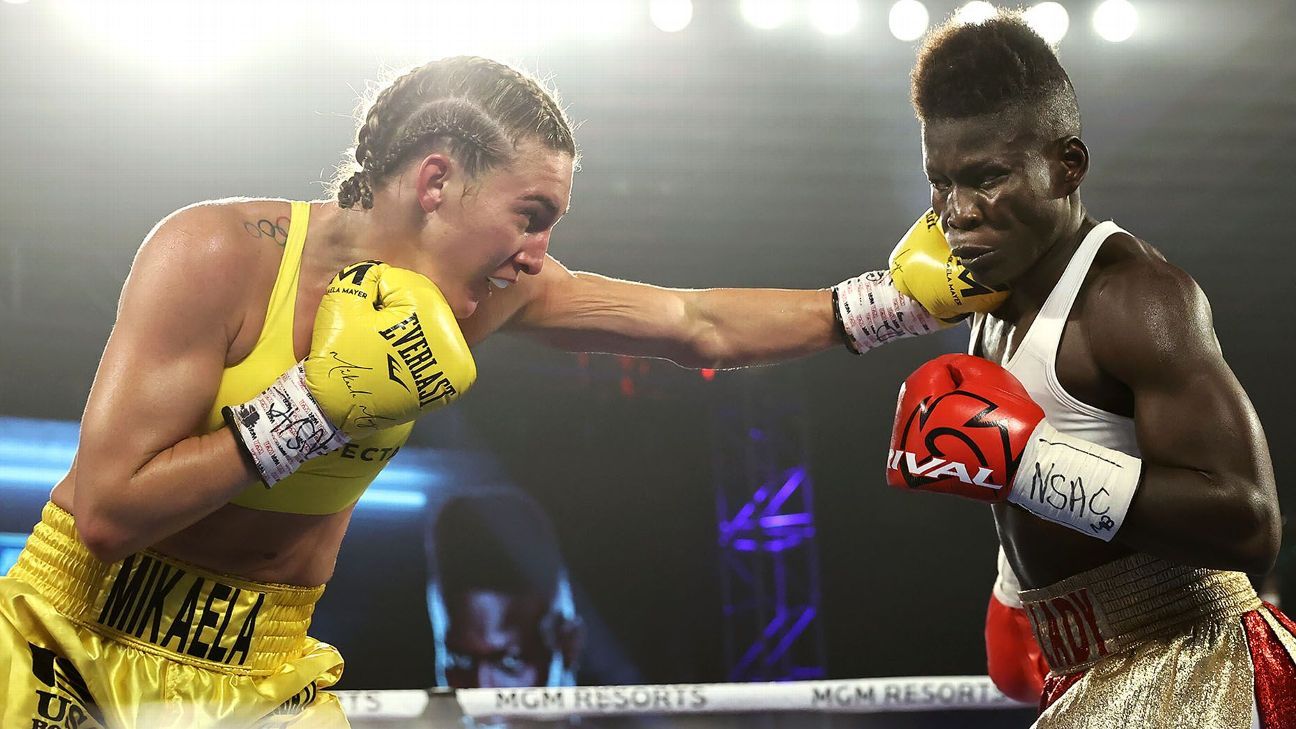 Junior lightweight contender Mikaela Mayer easily outclassed Helen Joseph in a one-sided 10-round unanimous decision in the main event of a Top Rank boxing card on ESPN at the MGM Grand Conference Center in Las Vegas on Tuesday.

This was the first time a women’s fight has been the main event for a Top Rank card on ESPN.

Putting forth a strong and focused exhibition of boxing and combination punching, Mayer began the fight at a fast pace, and never let up. After 10 rounds the scores read 99-91 and 100-90 (twice) for Mayer, who remained undefeated and on track for a junior lightweight title shot.

Mayer (13-0, 5 KOs) who was fighting without her lead trainer Al Mitchell, came out of the gate throwing quick, rapid fire 1-2 combinations down the middle. Joseph (17-5-2, 10 KOs) methodically stalked Mayer at a measured pace, and you wondered if her plan was to take over down the stretch.

[Mitchell] is my biggest critic, so even though I won every round, I probably didn’t work the body enough,” said Mayer after the fight. “I abandoned my jab at times, but I think, all in all, he’ll be happy.”

Unfortunately for Joseph, Mayer never relented in her attack. In fact, in the later stage of the fight, as Mayer started to mix in left hooks and right uppercuts to her combinations, Joseph’s willingness to march forward waned a bit.

From start to finish, this was Mayer’s night.

“[Top Rank promoter Bob Arum] said, ‘Great fight,’ and that the next one will be for the title,” said Mayer. “We’ve been trying to get a world title fight for a while now.”

Takeaway: Mikaela Mayer finally got her chance to make the most of a showcase event in 2020. Mayer defeated Helen Joseph and showed she could be ready to contend for a major title against some of the sport’s top names.

Mayer was in full control for nearly the entire fight and was so dominant that Joseph’s corner reportedly thought about stopping the bout early. In arguably the toughest bout of her pro career, Mayer cruised in a unanimous decision over Joseph.

Aye, I’m happy to see women’s boxing getting it’s shine, despite of my situation. I told @MikaelaMayer1 that this is HER moment, and to make the most of it!@trboxing @ESPNRingside #MayerJoseph

Let’s put this in perspective for Mayer. Last November, Joseph lost to Delfine Persoon, one of the top super featherweights in the world, who is scheduled to fight Katie Taylor for all four major lightweight belts in August. Mayer beat Joseph by a wider margin than Persoon. Frankly, there are a lot of interesting names in the weight range around Mayer — namely Persoon, Taylor and Amanda Serrano. It’s not out of the realm of possibility to suggest Mayer face one of those three before the end of 2020.

Everyone knows I love boxing and @MikaelaMayer1 put on a show tonight! She was dominant in her victory over Helen Joseph.

Mayer was set to be one of Top Rank’s featured fighters in 2020, but Tuesday’s bout was Mayer’s first of the year after two opportunities slipped away due to COVID-related complications.

Once Mayer finally stepped into the ring, her dominant victory over Joseph showed why Top Rank has been promoting Mayer so heavily. It’s only a matter of time before she’s in the ring to test herself against some of the top women in the sport. — Ben Baby

In the unfamiliar role as a favorite, middleweight Clay Collard stopped the overmatched Lorawnt-T Nelson in two dominant rounds, scoring four knockdown in the process, in the main event of Tuesday’s Top Rank boxing card at the MGM Grand Conference Center in Las Vegas. This was Collard’s fourth victory of 2020.

Collard (8-2-3, 2 KOs) got things started in the first round as he scored a knockdown of Nelson (5-4, 4 KOs) with a straight right hand. While both Collard and Nelson have backgrounds in MMA, the difference in skill inside the ring when it came to boxing was very evident early on.

In the second round, another straight right cross sent Nelson down. Nelson rose, but was quickly sent back to the canvas as he was struck by a counter left hook a bit later in the round. His nose was bloodied and his face was showing the damage of the two-fisted attack of Collard.

Finally, as Collard hit Nelson with another 1-2 punch combination, referee Celestino Ruiz waved off the fight at 1:57 of the second round.

“I fought him a lot more like a boxer,” said Collard after the fight. “I was picking my shots a little better, not crowding him so much, keeping him at the end of my punches and working my jab. I’ve just been improving my boxing.”

Collard landed 61 of 137 total punches, compared to Nelson who landed just 12 of his 88 punches.

Collard has been a fan favorite and could return to “the bubble” soon.

Arum: “We’ll have you back in August!”

“As soon as Top Rank wants me back, I’ll be ready,” Collard said. “Next month on ESPN, let’s go! This whole ‘A-side’ and ‘B-side’ thing doesn’t matter to me. I’m a fighter. I’ll fight anybody.”

Takeaway: His technique isn’t the most elegant, and he isn’t the most graceful fighter you’ll ever see, but there is a method to the madness. Collard is more than willing to mix it up, and his ability to throw punches regardless of where his feet are aligned troubles more classically trained boxers who are not used to that rhythm.

Collard got the kind of layup he hasn’t enjoyed for most of his career in facing Lorawnt-T Nelson, and it appears Top Rank may be trying to build Collard up to cash in on the momentum he’s built up. Sometimes you don’t need to see a Terence Crawford or Vasily Lomachenko, but rather just an honest to goodness brawler who gives everyone an honest effort and never stops coming forward.

Collard has also moved beyond simply being a novelty act who once fought Max Holloway in the UFC. Prior to this victory, Collard’s last three wins came against undefeated prospects with a combined mark of 20-0. Name the last boxer to accomplish that. Outside of Bektemir Melikuziev (a true blue-chip prospect at light heavyweight), nobody has had an easy time with Collard.

After beating some tough undefeated prospects, Top Rank throws Clay Collard a bone with that last fight. That tells me Top Rank is going to start building this guy up. Smart move if you ask me. It’s cool to see one of our own making some waves in boxing.

His ceiling may be limited because of his age and fighting background, and within due time he could be back in the more familiar surroundings of a cage, but at the very least Collard will continue to make some money as a tough hard-nosed gatekeeper to young prospects on the way up. — Steve Kim

Ruben Cervera defeated Clay Burns in what was a competitive, six-round, lightweight contest. After scoring a knockdown in the opening seconds, it seemed as though this might be a short night for Cervera, but Burns got up from the canvas and made a fight out of it.

Burns hit the canvas early in Round 1 as he charged at Cervera, whose back was against the ropes after a left hook clipped Burns’ chin and sent him down. Instead of being discouraged, Burns — who fought on June 25, losing a close, six-round split decision to Reymond Yanong — gained confidence as the fight went on. Burns began to pressure Cervera, backing him up and making him uncomfortable.

The fight seemed closer than the scorecards indicated, but at the end, the judges favored the harder punches of Cervera.

Takeaway: Nobody is going to confuse Ruben Cervera or Clay Burns as fighters of consequence in the long-term future of boxing. Before Tuesday night, Burns had already lost once in the MGM Bubble this summer. He did so again against Cervera, who had never won a fight in the United States and whose résumé includes a stoppage loss to Miguel Marriaga (who fights on ESPN next week).

Cervera picked up the unanimous decision victory over Burns (9-9-2, 4 KOs), and with all of that being said, give Cervera (11-2, 10 KOs, 1 NC) and Burns credit for the effort they showed in a six-round fight. Burns wasn’t discouraged from being knocked down in the first 10 seconds and even showed a bit of counterpunching and had success inside.

If Burns continues to evolve, he could potentially carve out a career as a viable club fighter. Meanwhile, Cervera will need to add tools to his game in order to be more competitive against better competition. — Ben Baby

It was a successful pro debut for middleweight Javier Martinez, who outpointed Ryan Burrs for a four-round, unanimous decision victory by scores of 40-36 on all three cards.

The 24-year-old Martinez, of Milwaukee, Wisconsin, got off to a slow start, but in the second round, he started hitting Burrs (2-2, 0 KOs) to the body consistently, mixing in a right hook to the head. Martinez is known as a pressure fighter who will come forward and break his opponents down steadily, and that was evident in this fight.

It was a solid, if not spectacular, effort from Martinez, who buzzed Burrs at the end of the third round with a right hook to the head just before the bell sounded. Burrs gave a strong effort and provided Martinez with a solid four rounds of work in his maiden voyage as a professional prizefighter.

Takeaway: Javier Martinez wasn’t spectacular in his pro debut, but he was solid enough. He faced a pretty sturdy guy in Ryan Burrs, who provided a decent test for Martinez, but I’d like to see more from Martinez moving forward.

The book on the 24-year-old Martinez is that he’s a pressure fighter who goes downstairs early and often. You saw some of that after the second round against Burrs following a tentative first round. He mixes up his body attack with both hands, and he likes to punctuate things with a right hook over the top.

It doesn’t look like he’s the most heavy-handed fighter, or a guy with one-punch KO power, but Martinez could certainly be someone who stops guys through attrition. You get the sense that as he gets more comfortable in the pro game, Martinez’s style will translate better in longer fights. Like a snowball, it will take time for him to roll downhill and really build momentum, and you won’t necessarily see him shine as brightly in these four- and six-round bouts.

If I had to compare him to someone, and project ahead, I’d go with WBO junior middleweight belt-holder Patrick Teixeira, who like Martinez is a volume punching southpaw that relies on a steady work rate and wears guys down. — Steve Kim