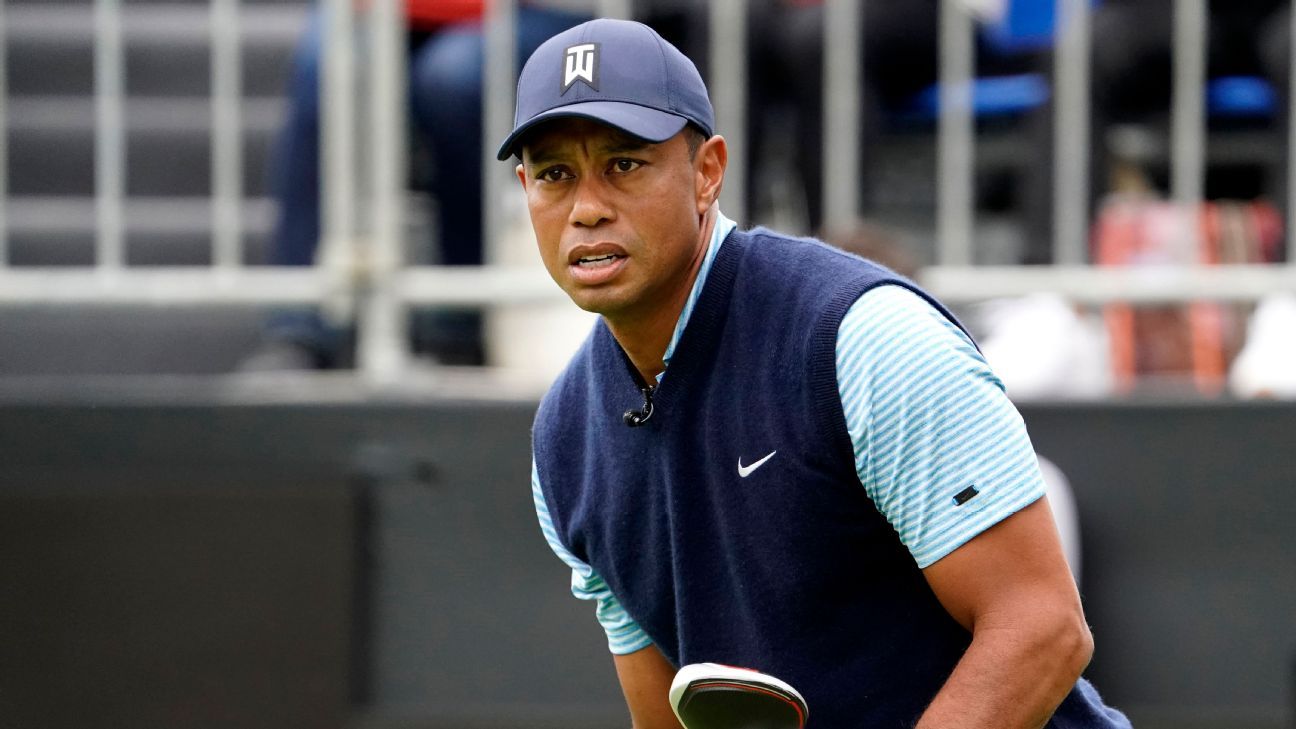 The coronavirus pandemic shut down golf in mid-March. But Tiger Woods was shut down a month before that. A stiff back kept him out of a host of tournaments he would normally play, such as the Arnold Palmer Invitational and the Players. When last we saw Woods, in February at the Genesis Open, a tournament that benefits his foundation, he was posting 76-77 on the weekend to finish last among those who made the cut.

Now, five months later, he returns. As he gets his first look at golf post-shutdown — no fans will follow his every move this week at the Memorial Tournament — we take a look at this week and beyond:

1. What do you expect this week out of Tiger?

Bob Harig: Good things. Not necessarily a win, or even contending on Sunday. But a solid performance that is perhaps stunted by competitive rust. Tiger has shown many times that he can excel despite a long layoff when healthy. The Zozo Championship, which he won in October, comes to mind. But this has been five months, save for the one round in a COVID-19 relief event with Peyton Manning, Tom Brady and Phil Mickelson in May. He looked good then. There appear to be no injury issues. He has won at Muirfield Village five times. And it’s also where he had a rare post-Masters solid finish last year, a tie for ninth. No reason to think Tiger won’t produce something to build on.

Michael Collins: The answer in my head changes every 30 minutes. Five minutes ago it was … He’s gonna show up and contend, play like he did at Zozo. He’s Tiger Freaking Woods, why would anyone think that he’s not ready to win? Thirty minutes before that it was … He’ll be lucky to make the cut! The field has had a five-week head start with the cut being no worse than 2 under. Much of the field already has an idea how Muirfield Village is going to play because of the Workday Charity Open, which was held on the same course this past week. The PGA Tour can’t now magically make it new for them, too. Last night it was … He’ll play OK. His experience around that place will matter, but the rust will show on at least one of the rounds. I am confident he can finish inside the top 30. Maybe confident isn’t the right word …

Mark Schlabach: I think he’ll probably put together a respectable showing, but I don’t think he’ll be in contention, especially not with the way Bryson DeChambeau, Justin Thomas, Webb Simpson, Collin Morikawa and others have played out of the break. They’re so far ahead of Tiger at this point. Brooks Koepka is still trying to put his game back together after knee surgery and the long layoff. Other topflight players like Justin Rose and even Rory McIlroy are struggling after the long shutdown. Tiger hasn’t played a competitive round in five months. He won’t be on the leaderboard, despite his past success at Muirfield Village.

Nick Pietruszkiewicz: He will be in the mix. How’s top 10, with a chance to win on Sunday sound? Listen, he knows what he’s doing. While everyone else raced to the first tee once the PGA Tour emerged from the three-month break, Woods waited. Whether it was because he wanted to see what this version of life on the PGA Tour looked like or that he wanted to wait for a course and tournament he knew well, or whether this was just the natural progression of gearing up toward a major, he had a plan. He always does. So, I think he’s ready and expect big things.

2. No player in the world has a bigger following than Tiger. Will no fans matter to him?

Harig: He will probably enjoy it to a large degree. Nobody deals with more commotion than Tiger, and he is well adept at handling it. But that doesn’t mean it doesn’t take its toll at times. If anything, it gives him an advantage because the other players in his group — and before and after — must alter their way of thinking, but he will be fine without spectators. He won the Zozo last year with no fans during the second round and limited numbers the final morning. And his win in 2012 at the AT&T National also had a day with no spectators.

Collins: Absolutely it matters. But not just to Tiger. Think about this scenario: TW is 4 shots back of the lead on Saturday and makes a great birdie on the 12th hole. You know what the leaders hear? Nothing! No roars from the crowd. That means no adrenaline smash for Tiger and no “awww, crap” moment for the guys knowing he’s making a move. I do expect to see a lot of “extra volunteers” walking around. Remember in 2016 at Congressional when there were no fans allowed in after a bad storm? About 500 ghosts walked with Tiger that round.

Schlabach: I agree with Bob and Michael. I don’t think it will be as much of an issue for Tiger as it will be for the other players in the field. The Tiger roars on the back nine can be downright intimidating and deflating for other players. Tiger will probably be much more comfortable without hundreds of iPhones pointed at him on every shot.

Pietruszkiewicz: I don’t think it matters at all. For one, as was mentioned, it eliminates some of the hassle he deals with. And while the rest of the field might not hear the roars, if Woods is in the mix, those players will still feel his presence. He can win in front of no one or 50,000 people. Roars or not, if his name is on the first page of the leaderboard come Sunday afternoon, the field will know that, too.

3. It’s going to be a conversation every time he tees it up: Is this the week he breaks Sam Snead‘s all-time record for wins? If not, when does he do it?

Harig: I don’t see it happening at Memorial. Just seems like that is too much to ask at this point. It would be fun to see him do it while also winning a major at the PGA Championship, but I am going to say it at happens at the BMW Championship at Olympia Fields, which potentially could be his fourth or fifth event back.

Collins: Nope. He’ll break it at either the Tour Championship in Atlanta in September or next year in April at the Masters (not as defending champ this November).

Schlabach: He’s not going to win at the Memorial. That’s simply too much to ask for a player who has played so little competitive golf. He’ll do it at the Masters, but at the first one in November. It would be about the only good thing to come out of 2020.

Pietruszkiewicz: I am tempted to call it, to say he comes back and puts on a show and gives golf another do-you-believe-he-did-that moment. Tempted, but I won’t go all the way there. He’ll finish top 10. But he will get No. 83 in one of his first four starts. He won’t make the world wait as long as we think he might.

4. The PGA Championship is a month away. Is this the only time we’ll see him before that?

Harig: The only one it could be is the WGC-FedEx St. Jude Invitational the week prior to the PGA Championship. This is a difficult call and is impacted by what Tiger wants to do with the FedEx Cup playoffs. If he elects to play all three playoff events — and that’s assuming he qualifies for the Tour Championship — then there is no way he adds another event. He potentially would play four times in five weeks and that might be too much. But Tiger has been loyal to WGC events, and he used to routinely play the week prior to the PGA when the WGC was at Firestone. Memphis means a new venue, but the heat is Tiger’s friend. And if he plans on skipping a playoff event, then this makes much more sense.

Collins: I think it’s 50/50. If I was Tiger I’d do exactly what he says he’s doing — listen to his body. If he feels like he’s healthy and can stay that way playing the WGC and then the PGA, he should (and will) do it. But if there’s any risk or he’s not absolutely 100 percent great after Memorial week, he should shut it down until the PGA Championship.

Schlabach: If things go well at the Memorial and his back and game hold up, I could see him playing again at the WGC-FedEx St. Jude Invitational as another tune-up before the first major at Harding Park. That would require back-to-back weeks of play. Is that too much to ask?

Pietruszkiewicz: I think this is it. The WGC event is a possibility, but he’s not going to play consecutive weeks and he is not going to play the week before a major championship. Granted, it’ll hurt his chances for the playoffs, but let’s be honest: He cares about majors. And playing again before the PGA Championship in the first week of August doesn’t make much sense in the major scheme of things. The schedule is awfully packed from now through the Masters in November. Three majors and the FedEx Cup will keep him busy. It’s about the big picture for him these days.

5. How well will Tiger navigate the next four months. What do you expect — in terms of appearances and wins?

Collins: Things have changed now that the Ryder Cup has been postponed. I have Tiger playing these events: The Memorial, WGC-Fed Ex, PGA Championship, Northern Trust, Tour Championship, U.S. Open, the Masters. Here’s the caveat: If Tiger is not 100 percent healthy for everything, he’ll skip all the PGA Tour events and only play the majors. As he said earlier this year — I’ve been screaming it for years — the less you see him, the longer you’ll see him.

Schlabach: He’ll play six or seven times, including the victory at Augusta in November.

Pietruszkiewicz: I agree — seven or so times sounds right. And I am saying two wins, including one major. For some reason — maybe I still have Zozo and the Presidents Cup and how smooth he looked in the rainy charity match with Manning, Brady and Phil — it just feels like something big is about to happen.