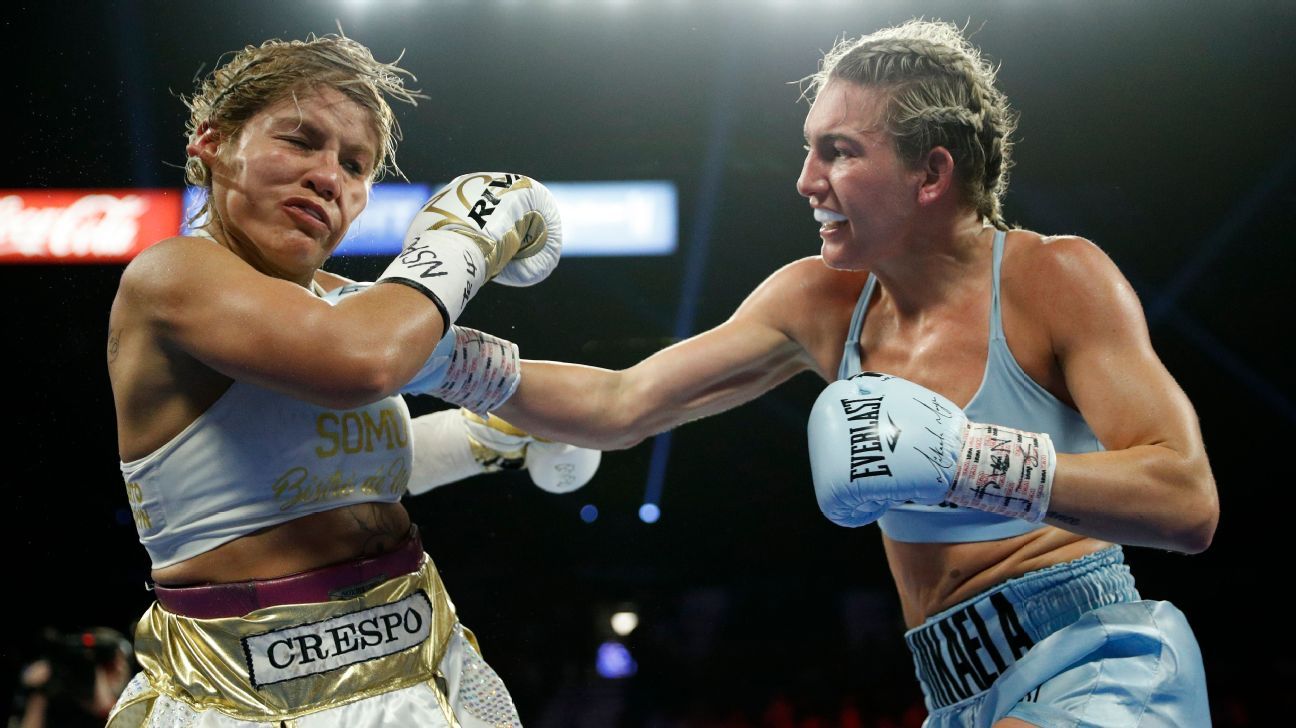 Like everyone else, Mikaela Mayer found out about Jamel Herring’s positive test for COVID-19 on Monday morning. It postponed Herring’s junior lightweight world title defense against Jonathan Oquendo for the second time.

Just like that, Mayer’s bout versus Helen Joseph was elevated to the main event spot of Tuesday’s Top Rank on ESPN card. Mayer said it’s a ”bittersweet” moment for her, as she landed that coveted spot on the broadcast from the MGM Grand Conference Center in Las Vegas at a cost.

“But obviously, now I have a chance now to showcase my skills, showcase women’s boxing on a main event spot on ESPN. When was the last time you’ve seen a women’s fight on the main event slot on ESPN?”

Mayer knows the perils of making it to fight night in the era of COVID-19. Her fight against Joseph was originally slated for June 9 but was called off when Mayer tested positive for the virus. Instead of being a key part of the first show staged by Top Rank inside “the bubble” this summer, Mayer drove back to Colorado Springs, Colorado, and took the rest of that week off to, as she put it, ”rest my body, recover my mind.”

It was Mayer’s second COVID-19-related delay of 2020. She was supposed to be part of the undercard of a show at the Theater at Madison Square Garden that was called off in mid-March, one of the first sporting events canceled during the initial wave of the coronavirus pandemic.

After going through two rigorous training camps with no fight to show at the end of it, Mayer is back in “the bubble,” cleared to fight and ready to get the payoff at the end of it all.

For Mayer, having to go through the process of entering “the bubble” isn’t all that bad, especially compared to the journey it took for her to reach Tuesday night.

“It’s not really a problem for the athletes because this is all we do anyway,” said Mayer said. “We go and train — and we go sit our ass in the bed.”

All the fighters and their camps are relegated to the 12th floor, and fighter meetings, which are done via video conference, are a few doors away from her room, as are the photo shoots that are taking place.

Besides the circumstances mandating this kind of system, Mayer called that kind of compact area “kind of nice” for fighters eager to focus on the task at hand.

What happens after this fight — should Mayer come out victorious — is still a bit of an unknown. Her manager, George Ruiz, says he hopes to have her fight twice more in 2020, but given the current circumstances of the boxing world, Ruiz isn’t sure that a title shot by the end of the year is realistic.

Mayer suggested something along the lines of what the UFC is currently in the midst of, bringing fighters from all over the world to Abu Dhabi for a series of shows that kicked off Saturday with the UFC 251 pay-per-view. “Why can’t we all just meet there? I’m with it. I’m on board with that,” she said.

Mayer still has to win Tuesday’s fight before considering her next step, and she’ll have a considerable challenge in front of her, as Joseph is by no means a pushover. In terms of the main event slot, Mayer believes there won’t be any extra pressure involved — but there is opportunity.

“It’s not like the platform has changed. I was the co-main before. So I’m still going to be on ESPN,” she said. “I still have a lot to prove. I still have a tough fight in front of me.

“But it’s the title of ‘main event.’ I’ve worked, really, for it a long time. Even though I got it by default, I’m going to make the best of it. Get in there and show that women’s boxing is main-event-worthy.”

Things to look for on Tuesday

1. One additional note ahead of Mayer’s fight: On Tuesday, Mayer will be cornered by Kay Koroma and Manny Robles. As a safety precaution, 76-year-old Al Mitchell, who has been preparing Mayer in the lead-up to this fight, will not be in attendance.

2. Fighters who want to work often have had ample opportunity during this stretch of the summer. One such fighter is Clay Burns (9-8-2, 4 KOs), who is paired with Ruben Cervera (11-2, 10 KOs). Burns fought as recently as June 25, losing a split decision to Reymond Yanong over six rounds. Burns is one of those guys who will fight just about anyone on relatively short notice and give you tough, quality rounds. With his willingness to fight basically anyone from 130 to 147, don’t be surprised if he gets the call again in August.

20-0: The combined record of the past three opponents Collard has beaten. On Jan. 3, he defeated Quashawn Toler, who was 9-0. A month later, Collard knocked out Raymond Guajardo, who was 5-0. On June 18, Collard picked up a split-decision win over 6-0 David Kaminsky.

Thursday night’s main event is a 10-round featherweight contest between Miguel Marriaga (29-3, 25 KOs) and Filipino trial horse Mark John Yap (30-15, 15 KOs). Marriaga was scheduled to face Shakur Stevenson for the WBO featherweight title on March 14, but that card was shut down because of the coronavirus. Fast-forward to July, and Stevenson has vacated that belt, so in the meantime, Marriaga gets a stay-busy fight.

The more intriguing storyline of this night is the second outing for lightweight Felix Verdejo under the guidance of well-respected trainer Ismael Salas. Salas’ specialty has been rebuilding fighters who fell on tough times, such as Yordenis Ugas, Jorge Linares and, more recently, Robeisy Ramirez.

It wasn’t that long ago that Verdejo was considered a blue-chip prospect destined to follow in the footsteps of Felix Trinidad and Miguel Cotto as the next great boxer from Puerto Rico. Right around the time of his bout with Ivan Najera in June 2015, his progress stalled. Verdejo continued to notch victories, but there was something missing. In March 2018, he was stopped in 10 by Antonio Lozada, and many pundits wrote him off.

“I was once considered a very good prospect, but after a while, that stopped,” Verdejo said at the beginning of 2020, as he prepared for his June 18 bout with Manuel Rey Rojas. “I think all of that was my fault. I was just hanging with friends, not taking everything seriously, thinking that I knew it all. But finally I understood that I need to take this seriously because boxing is a very serious sport. I’m making these sacrifices I am now.”

After years of being told to leave his longtime trainer, Ricky Marquez, and go to a training camp away from the distractions of Puerto Rico, the 27-year-old made the decision to move his training to Las Vegas.

Another thing Las Vegas provides is a deeper pool of sparring partners. Top Rank had concerns that the work Verdejo had been getting in the past wasn’t preparing him for live action. In Salas, he has a trainer with a deep championship pedigree.

“I’m doing great with Salas. We have a very good chemistry together,” Verdejo said in January. “Everything he brings is good vibes and happiness. He’s got a very good attention to detail, and he’s teaching me things that I never thought I could learn: new moves, new drills, everything. I enjoy that.”

Verdejo has been in Las Vegas since May preparing for this week’s bout.

“I know I still have the talent to become a world champion. Now I have the drive, desire and hunger to keep training hard and keep that goal of winning a belt,” he said. “I know I’m going to do it. It’s definitely a new stage in my career. I’m very motivated and with that goal of becoming one of the best in boxing.”

Things to look for Thursday

1. Heavyweight Jared Anderson was supposed to face Hector Perez on July 9, but after a drug test revealed that his opponent had elevated levels of testosterone (which eventually went back to normal), this contest was pushed to July 21. Over the weekend, it was moved to this card. “Big Baby” Anderson stopped Johnnie Langston in three rounds on June 9 inside “The Bubble.”

2. When asked what is the best bout on Thursday’s undercard, Top Rank matchmaker Brad Goodman pointed to the eight-round featherweight tussle between Martino Jules (9-0, 2 KOs) and Aleem Jumakhonov (8-2, 4 KOs). “That’s going to be a solid fight,” said Goodman, who likes Jules’ deep amateur background in Allentown, Pennsylvania, and believes that Jumakhonov is a rugged customer.