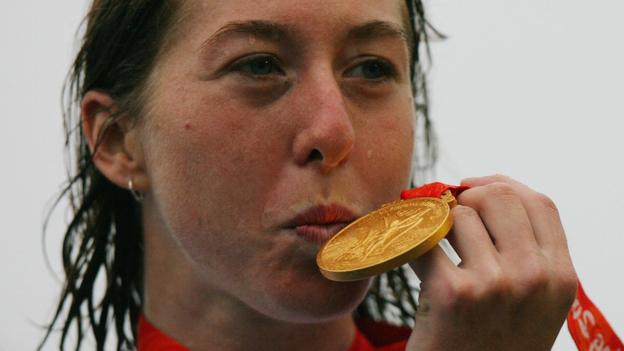 Nicole Cooke was just 12 when she told a BBC reporter that she wanted to win the Olympic road race and the Tour de France.

Big dreams indeed, but there’s nothing wrong with a little youthful enthusiasm. And dreams can, and do, come true.

“There was a big cycling world still to discover and a very long path in front of me,” says Briton Cooke, 25 years on.

“It was a natural way to say that I didn’t quite know what was in store, but I was definitely aiming for the top.”

Little did Cooke and that reporter know just what that young Welsh girl, who would race her father and brother the five miles to and from school each day, would go on to achieve.

Recalling the day she won the Beijing 2008 road race, Cooke’s smile as she’s talking is so obvious it can almost be heard down the phone.

Her gold was the first of 19 won by Great Britain at that Olympics and, 12 years on, she can still remember every minute detail.

“I’m very happy looking back,” she says. “I’m extremely proud of everything I achieved. It is part of me.

“The Olympics is special, not everyone can win it.”

Her gold was the first won at an Olympics by a British female cyclist, the first individual gold won by a Welsh woman, and Great Britain’s 200th since the birth of the modern Games in 1896.

But this story, and those published in the aftermath of Cooke’s success, may never have been written had she gone down one route, and not the other, in the latter months of 2007.

From dark days to gold

Four years before Beijing, Cooke had made her long-awaited Olympic debut in Athens. She finished fifth in the road race – a result she was “extremely disappointed” with, given her World Cup success in 2003 and the fact she had become the youngest rider to win the Giro d’Italia earlier in 2004.

Remarkably, her Giro win had come after eight months of no racing following surgery on a knee injury she had first sustained in a nasty crash the previous year.

Knee injuries would plague Cooke for years – so much so that in the dark days of November 2007, nine months before the Olympics, Cooke strongly considered quitting.

“I didn’t want to go to the Olympics and just be there. I wanted to go to try to win it,” she says.

“I was really struggling to see how I was going to be competitive.

And try she did. Going into Beijing, she had raced less than she would have done in a normal season, but had won her eighth consecutive British Road Race Championship.

She was excited, though a little nervous. The British team – Cooke, Emma Pooley and Sharon Laws – visited the course in the days before the race, doing a practice finish.

“I just felt really, really good, and very strong,” Cooke recalls. “I then became quite nervous over the last couple of days because I realised that I really could do this. This could be the time.”

Those who watched Cooke’s golden race will remember the rain, the seemingly endless torrential downpour more typically akin to that of the Welsh hills than the Great Wall of China.

It made the riding conditions abysmal, but Cooke negotiated the punishing 126km race – from the centre of Beijing to loops around the Badaling section of the Great Wall – to perfection.

Much of it was spent conserving energy, waiting for the right moment to attack, before she and four others formed a breakaway with about 6km to go.

On the final, steep incline leading to the finish, many, including the television commentators, thought Cooke was out of the running.

But she had other ideas.

“I felt happy that I could go from a long-ish way out, and still have that extra push for the line,” she explains.

“The others were there to take it if I made the slightest mistake, so I had to be very careful, but I was also coming into that finish thinking: ‘I can decide when I go, this is my kind of finish.’ I really liked this kind of power sprint uphill.

“I was closing from behind but there was still quite a little bit to go. There was a right curve with about 400 metres to go. I knew I was coming up the hill faster, the shortest way up was on the inside.

“I didn’t want to be at the back when the sprint started, so I knew I had to get a bit further forward with these riders. But then I realised I was going faster so I felt I could take it all the way.

“In the moment I did all these things instinctively. There wasn’t much to think about once I’d committed.”

With her legs no doubt screaming, Cooke powered her way to a historic victory, Sweden’s Emma Johansson and Italian Tatiana Guderzo taking silver and bronze in her wake.

When you watch the footage of Cooke crossing the line it is quite, as she puts it, “revealing” of the emotions and thoughts going through her head in those moments.

“I clenched my fists for ages, just shouting: ‘Yes,'” she laughs. “There was a little bit of: ‘Wow, this is incredible.’ That’s what I was thinking. I actually did it.

“It was the absolute pinnacle of my sporting career. It was the Olympics, and I had done it and won.”

‘I’m proud of being a trailblazer’

Cooke retired in January 2013 having “won every race and more that I dreamed I could win”. Now living in Switzerland, she still enjoys getting out on her bike, but is “well into her second career” working in strategy.

But back in Britain, her legacy lives on in the cycling world.

Her achievements make for an impressive read. In addition to those Olympic, world and Tour de France titles, she was also the first British rider to win a Grand Tour, the World Cup, and to reach world number one.

“I’m proud of being a trailblazer, setting new firsts in the world of women’s road racing,” she says.

“Also, being a trailblazer for sport in Wales and ending a drought of 36 years since the last Welsh Olympic gold medallist.”

Cooke’s retirement statement was explosive. In it, she took aim at the “male-dominated sport”, as well as drugs cheats who she said had brought about cycling’s “darkest days”.

As she puts it, Cooke did “more than just ride a bike” during her career and was not afraid to stand up for what she felt was right.

And while they may not necessarily realise it, the generations of female athletes who followed Cooke into cycling have a lot to thank her for.

“After getting no as a first answer, I continued to ask or, as some at British Cycling say, to demand.

“I’m very proud that there is now a way through those British Championships for those riders to have a showcase to race, and have their own pathway through from being that 12-year-old with a dream to the Olympics.”