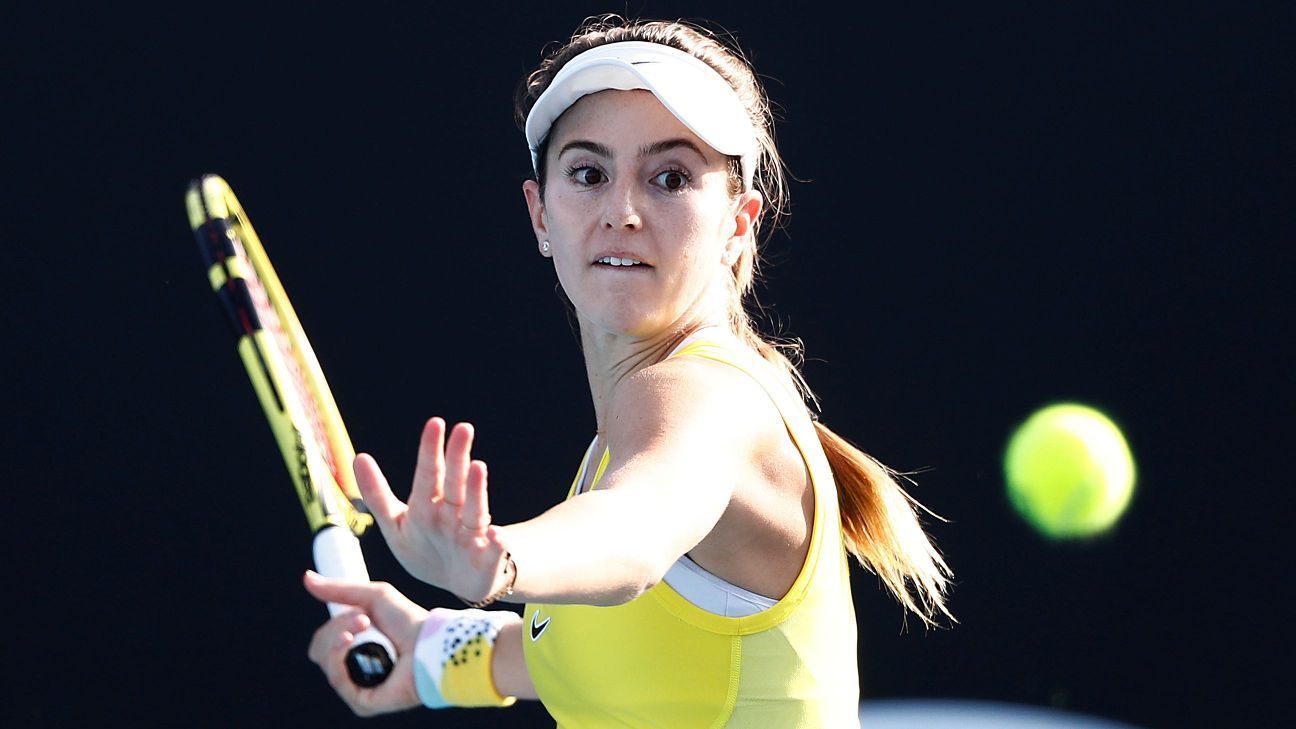 When the global coronavirus pandemic shut down the WTA Tour in March, CiCi Bellis suddenly found herself with indefinite free time. But, having spent the better part of the past two years dealing with injuries and being sidelined from tennis, she knew immediately how she would pass the time.

The 21-year-old from San Francisco started working on obtaining her college degree through a partnership with Indiana University East and the WTA during her recovery. Once play was halted ahead of the BNP Paribas Open in early March, she immediately signed herself up for more classes. Over the past few months, she has taken online courses in international business, marketing and principles of information management.

“Higher education is extremely important to me,” said Bellis, who made her return at the end of 2019 and advanced to the third round at the Australian Open in January.

“I always want to continue learning and bettering myself. I think my favorite thing I’ve studied so far has been accounting — I’m a huge fan of math and anything involving numbers. The toughest part [normally] about taking classes is definitely juggling it with being a professional tennis player and managing my time to do both the best that I can. I definitely have been able to dedicate more time to it recently with the tour being suspended.”

And Bellis, who plans to major in business, is not alone in her quest to pursue higher learning during the unexpected break. Gaby Dabrowski and Daria Gavrilova also have been taking advantage of the WTA’s affiliations with Indiana University East and the University of Florida.

Dabrowski, currently ranked No. 7 in the world in doubles, has been playing tennis professionally since she was a teenager. Dabrowski, of Ottawa, Canada, always envisioned she would go to college one day, she just didn’t think it would be during her playing career. Now 28, she started to think about life after tennis in recent years and enrolled in the program with Indiana University East in 2019. She initially was planning to take a course whenever she could, but once the tour was suspended, she knew she could get a head start. Dabrowski completed an English course, and currently is nearing the end of another one in public speaking.

The WTA pays for 75% of tuition, and everything is done online, even in non-shutdown times. The partnership between the school and the WTA began in 2013, and nine players, including Venus Williams and Sloane Stephens, have graduated with bachelor’s degrees. Dabrowski has loved the chance to learn again in a formal setting.

“For me, it’s just about having the educational background to pursue my passions outside of tennis for when I do retire from the tour,” she said recently. “And it’s just, basically, also giving me the outlet while I’m playing to focus on other things. I’ve always loved to learn and even when I wasn’t taking university courses over however many years since I completed high school, I was always reading and watching a lot of ‘TED Talks’ and YouTube videos.

“So it’s not like I wasn’t learning, but it wasn’t like it was going towards a degree. Now I’m like, ‘Well, I may as well turn my focus into learning something that will go towards a degree someday.’ And that’s something that I can use that after tennis, and it’s so amazing to have that opportunity, and to get outside of that tunnel vision about tennis and nothing else. This helps with figuring out a plan for after tennis.”

She is enjoying getting the chance to interact with other classmates in her public speaking class, which requires students to regularly post videos of themselves giving speeches and to give and receive feedback to and from their peers. Dabrowski, who was in the middle of preparing a persuasive speech on the benefits of cutting back on red meat at the time of her interview, admits it’s daunting to have to have to put herself out there but appreciates getting to know people she normally wouldn’t meet.

“It’s cool to be a pro athlete, but at the same time, I think it’s good to kind of look out, just kind of take in other people’s stories, as well,” said Dabrowski, who is hoping to major in psychology. “It’s been great to see how people are trying to juggle so much. There are older adults in the class, many have families, many have full-time jobs, there is at least one who has battled cancer. They are trying to do so much while also trying to further their education. I’m in awe of them.”

Gavrilova, 26, found herself sidelined from play with Achilles tendonitis and plantar fasciitis following a first-round exit at the 2019 US Open. She didn’t play for the rest of the year and was still recovering at the start of the season. When she realized she would have some downtime in the fall, she enrolled in Florida’s athlete development specialist certificate program to keep herself busy (as well as getting a puppy named Tofu).

Now going on more than 10 months, she had no idea just how long her break from tennis would last, but she thinks that almost made it easier for her when the restrictions were put in place.

“I haven’t played since August, and then I had a procedure done, so I couldn’t go anywhere,” she said recently from her house in Melbourne, Australia. “I feel like I had been preparing for being stuck at home for months before everyone else.”

Like the affiliation with Indiana University East, the WTA helps subsidize in-state tuition at Florida, and players have the option to enroll in one of 12 master’s degree programs or four graduate certificate programs. Gavrilova’s online program, which is broken down into seven modules, focuses on sport performance and science, media relations, transition after a professional athletic career and the business side of sports.

The former world No. 20 did a case study on disgraced cyclist Lance Armstrong and his attempts at image repair, and has used her fiancée and tennis player Luke Saville as her ongoing case study, writing assessments on his life on and off the court and even analyzing his social media accounts. She said she has found it fascinating and has tried to implement some of what she’s studying into her own life.

“There’s so much more to us than just hitting tennis balls,” she said. “I have learned how crucial it is to prepare for post-tennis life and how to maximize my time now as a professional athlete. So that means, on top of the tennis part and the athletic performance, the business aspect is just as important — do you have an agent you trust and [who] is looking out for you? Or, trying to network at various events and player parties and meeting as many people as possible while you can.

“I look at Twitter completely differently now, too, and how people use their voice. With athletes like Serena [Williams] and Naomi [Osaka], I see how deliberate their messages are, and they aren’t just writing posts for the sake of it, when they post, it means something. It has made me now stop myself when I just go to retweet something, I now ask myself what I like about it and try to at least add that in a comment with the retweet. [This course] has just changed the way I see things.”

There are no formal deadlines, but she expects to complete her certification by the end of this year. Gavrilova thinks she might ultimately like to go into the athlete-development field when her tennis career ends.

Gavrilova, Bellis and Dabrowski still feel years away from their second act, so their break hasn’t been all studying and listening to lectures. Gavrilova has been able to resume on-court training in Melbourne and has been able to play some competitive matches at her club. She was practicing with Saville initially, but she jokingly said it was just too much time together.

Bellis and Dabrowski both have spent the break in Florida — at the USTA National Campus and Saddlebrook Resort, respectively — where they have been able to train throughout and work with other pros. Dabrowski also is one of eight members on the WTA Players’ Council, having been elected by her peers in August. She didn’t exactly expect to be dealing with a months-long shutdown when she started in the role but is thankful to be in the position during such a challenging time.

She and her fellow council members have had virtual meetings several times a week and are in touch with each other daily to discuss the latest updates and developments. Dabrowski also has been a part of the WTA’s meetings for all players and tries to keep her peers as in the know as possible while also trying to gauge opinions and feelings whenever possible.

“I’ve always believed very strongly in communication and transparency between the governing bodies of tennis and the players,” Dabrowski said. “Because we aren’t unionized, we don’t have anybody fighting on our behalf. All we really have is player council and then our player board representatives.

“So it was really important for me to make sure that all players, especially those that are sometimes forgotten, like the lower-ranked singles players and the doubles players, have a voice. It’s a little stressful and doesn’t leave me with much time, but I don’t mind the work. I really put my heart and soul into everything that I do. Whenever I sense that there’s some kind of injustice that’s going on with something that I care about, I really go all-in, and that’s sort of where I’m at right now.”

Dabrowski is excited about the return of tennis later this summer but has reservations about the current plan surrounding the US Open in New York. So much so, she doesn’t think she will play at the event at this point but admits that might change. She is skeptical it will happen at all, as is Gavrilova, who currently plans on making the trip from Australia but will rigidly follow every suggested protocol.

“I understand we want the chance for our players, and the tournaments, to make some money, but I’m very concerned about everything,” said Dabrowski. “I don’t know, I really don’t have all the answers. I don’t live my life in fear, but I’m also cautious, and I respect the uncertainty of this situation.

“Tennis is so global, and that’s one of the best parts about our game. But right now, it’s also our Achilles’ heel. It just makes everything so much more complicated. I guess we’ll have to wait and see what happens.”