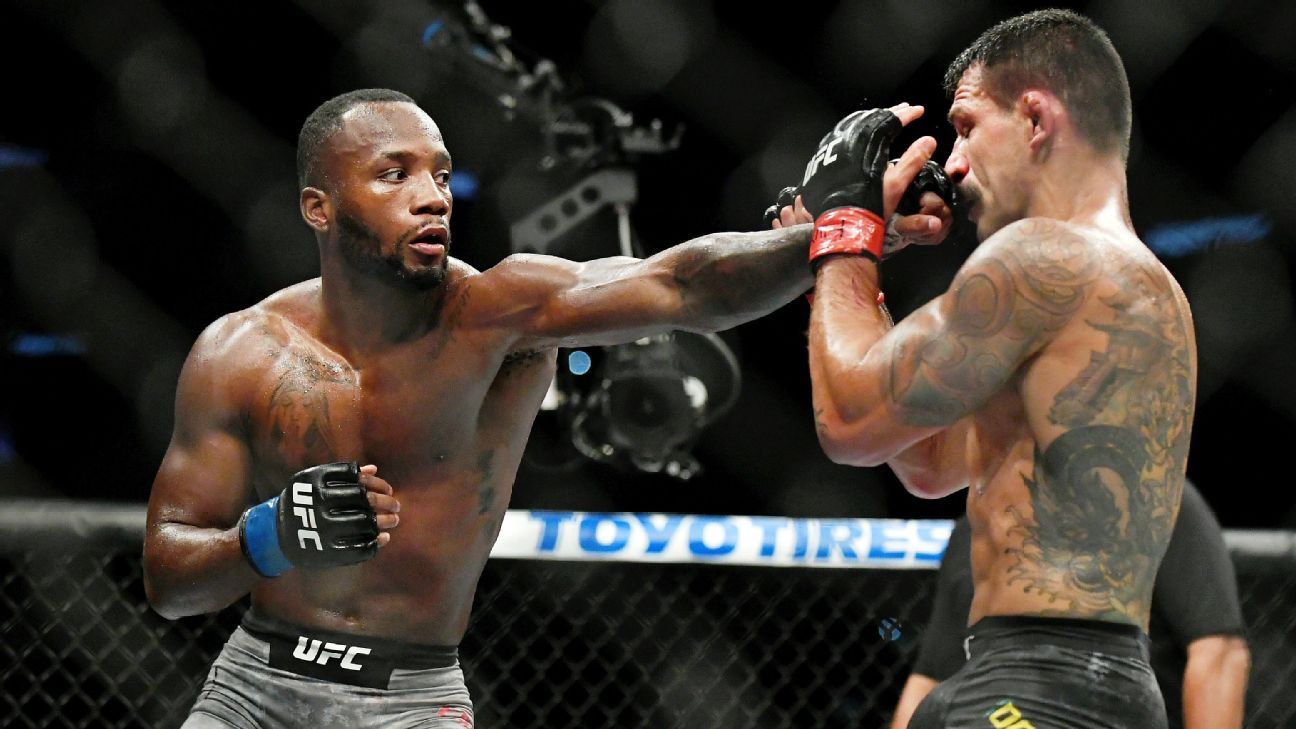 With this past Saturday’s UFC 251 welterweight title fight out of the way, I think this is an appropriate time to take a look at the rest of the division.

After all, welterweight is fascinating these days, and it’s always fun to matchmake a hot-and-heavy weight class, so let’s get to some matchmaking, shall we?

Of course, we have to start with the champion, Kamaru Usman. He won a hard-fought battle and deserves some time off. I mean, what a stressful summer for Usman. He goes from thinking he will fight Jorge Masvidal to then a teammate in Gilbert Burns to then Masvidal again, all on six days’ notice, no less.

The UFC returns to Fight Island with a rare Wednesday night card. The main event features two surging featherweights, as Calvin Kattar faces Dan Ige. Kattar (21-4) has won three of his past four fights, while Ige (14-2) has won six straight.

For the record, I think the criticism Usman has received since his unanimous-decision win over Masvidal has been unfair. He fought a smart fight and did what he had to do to win. And guess what? Had he just stood and traded with Masvidal, we’d be talking about how big of a mistake that was. Just like when we talked about how it was a mistake for Yoel Romero not to use his wrestling against Israel Adesanya or how it was a mistake for Daniel Cormier to stop wrestling Stipe Miocic en route to getting knocked out in August.

Anyway, Usman could use some time off. He said he wanted to spend time with his daughter, and he should do that. I suspect we won’t see him until the end of the year, at the earliest.

So, in the meantime, the UFC should book Leon Edwards vs. Gilbert Burns as a No. 1 contender fight in September. I honestly can’t believe so many people disagree with me on this one.

Allow me to explain:

Edwards has won eight in a row. He was scheduled to fight Tyron Woodley on March 21; however, that card got canceled due to the coronavirus pandemic. That obviously wasn’t Edwards’ fault. As a result of him not being able to travel, the UFC booked Woodley vs. Burns. Burns won that fight, his fourth in a row at welterweight and sixth in a row overall.

Yet, for some strange reason, everyone is acting like it’s crazy to say Edwards deserves this shot. Mind you, I’m not even saying Edwards deserves to fight Usman next for the belt. In reality, that would probably be the most fair thing. He has done enough. I’m just saying he should be in a No. 1 contender bout. The gall of me!

So, why is Edwards getting dismissed here? Because Burns beat Woodley? Did we forget Edwards was supposed to fight Woodley in March?

Because Burns had the title shot at UFC 251 and then lost it after he tested positive for COVID-19? Did we forget the UFC actually offered the title shot to Edwards first after the Masvidal talks fell through, but Edwards hadn’t been training and couldn’t due to the U.K. lockdown? This was, after all, Edwards’ very first title shot.

I just don’t understand why Edwards isn’t getting a look here. If it’s because the UFC doesn’t think he is an exciting fighter, fine. I guess. I don’t love that explanation, but at least it is one. Thus far, we have not received any kind of explanation as to why the notion of suggesting a fighter on an eight-fight winning streak battling for the belt is being deemed ludicrous.

Shall we compare their résumés?

Burns’ past six wins (and two were at 155) have come against: Woodley, Demian Maia, Nelson (after Edwards beat him), Aleksei Kunchenko, Mike Davis and Olivier-Aubin Mercier.

Now, I’m sure your first reaction was, well, Woodley is the biggest name of that bunch. You’re right, but Edwards was scheduled to fight him first, remember?

Otherwise, I think Edwards’ body of work is much more impressive, as well.

And don’t get me wrong, I also feel for Burns — whom I voted as the fighter of the midyear. He was so close to getting his title shot. He is an amazing fighter.

It’s a crummy situation all around. They’ve both been handed a tough break. So, let them battle it out, and then the winner is the undisputed top contender who fights Usman either later this year or in 2021.

Then I’d book Masvidal vs. Nathan Diaz 2. This is the perfect time to book this fight. They are both coming off losses, and they want to fight each other. Remember, Masvidal said before the Usman fight that he would want to fight Diaz next. Now I’m sure Masvidal was hoping it would be a welterweight title fight, but them’s the breaks. The fight would still be a big one, in my opinion, and you could easily sell the aspect that it was stopped unceremoniously by the doctor last year. Heck, you could even dust off the ol’ BMF belt and everyone will go gaga again. A win for all.

I’d also book Colby Covington vs. Woodley. This is a fight that should have happened two years ago. The UFC definitely agrees with me on this one, because I’m told they are trying to book it for Aug. 22, but the deal isn’t done yet. I’m a little surprised it is being proposed so soon, considering Woodley fought on May 30; but other than that, I love this fight and am very eager to see it. There’s legit bad blood between these guys, and considering they are both looking to bounce back after tough losses, there’s no better time than now to make it happen.

And here’s one more for you: How about we finally see Stephen Thompson vs. Maia? I’ve always been intrigued by that matchup. I’d love to see it before Maia walks away.

That accounts for the top nine fighters at 170. And you know what? I feel like it’s pretty darn cut and dried. You know, sometimes it’s hard to figure out the puzzle that is the top of a division, but I really think this one is fairly easy.