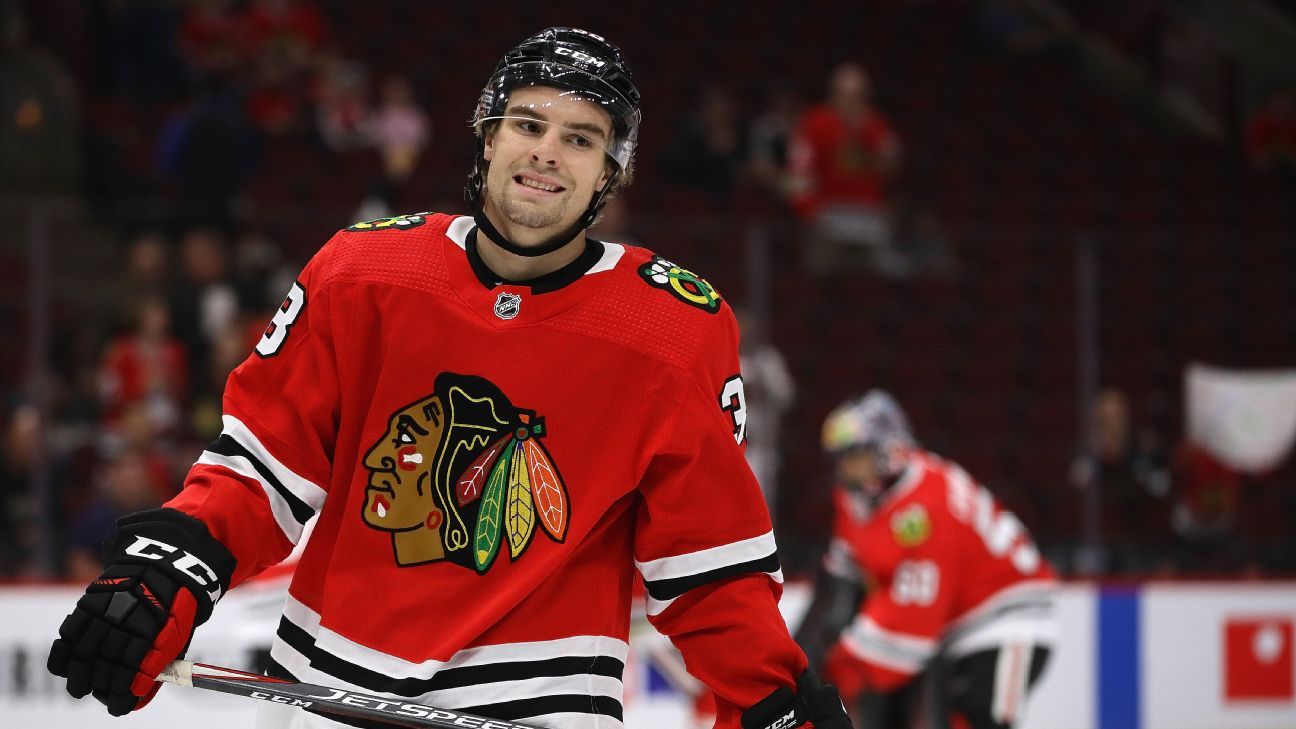 Brandon Hagel believed his dream of playing in the NHL had hit a dead end, so he was close to studying to become a teacher.

In 2016, the winger was drafted by the Buffalo Sabres in the sixth round, but after two years, they didn’t sign him to an entry-level contract. He went back to his junior team in Red Deer for his age-20 season a bit deflated. Hagel had already been to three NHL training camps — two in Buffalo, one in Montreal — but he never got as far as exhibition games, and didn’t know if there was an NHL future for him.

“I was signing up for classes, getting ready to go to school,” Hagel says. “My dream was crushed, not signing with an NHL team at first.”

Hagel wasn’t aware, but entering the 2018-19 season, Chicago Blackhawks scouts had flagged him as a “likable player.” GM Stan Bowman was intrigued enough to make an early-season trip to watch Hagel in Alberta.

“I was impressed with his overall engine. He’s a very active player,” Bowman said. “He was in the middle of everything, making things happen. Up the ice, down the ice, forechecking, penalty killing, power play, he was kind of doing everything with his junior team. We decided we wanted to make him a Blackhawk, and he chose us as well.”

Hagel finished out his season in Red Deer and joined the Blackhawks’ AHL affiliate in Rockford for eight games last spring.

Hagel is part of the Blackhawks’ training camp this week and, according to Bowman, is a good bet to be on their extended roster during the 24-team tournament this summer as an extra forward. It’s the culmination of momentum for the 21-year-old.

“He became our best player in Rockford,” Bowman said. “And throughout the year, we wanted to reward him for his play.”

Hagel led all IceHog skaters with 19 goals in 59 games this season, including four game winners. So the Blackhawks called Hagel up on four separate occasions, though he didn’t get to make his NHL debut until March 11 — the Blackhawks’ final game before the NHL season was paused because of the coronavirus.

Each of Hagel’s previous call-ups presented a unique experience.

Hagel’s first NHL call-up was on Jan. 16. He was sent right back down. Then two days later, Hagel was in Grand Rapids, Michigan, when he got a call in his hotel room: The Blackhawks, who were playing in Toronto, were going to call him up.

“I actually remembered my passport, but forgot my wallet,” Hagel says. “So I couldn’t get the rental car myself.”

IceHogs assistant GM Nick Anderson drove Hagel to Detroit, where he hopped on a plane. Hagel joined the team for a practice, but he didn’t know whether he would play, as the Blackhawks were still monitoring a few injuries.

“They had my parents waiting at the airport [at home in Alberta],” Hagel says. “Their plane left in like 20 minutes, they were on the gate already. As they were walking on the plane, I still didn’t know if I would get in. I got off the ice from morning skate, was looking around, nobody was there to be found, and then they told me I wasn’t going to be playing. But I was obviously just happy to be there with the team and have that opportunity.”

Hagel spent three days with the Blackhawks, which were quite eventful. First, he witnessed Patrick Kane‘s 1,000th career point. Then, he was on the ice for an infamous morning skate in which veteran stalwarts Jonathan Toews and Duncan Keith got into a prolonged scrap. In fact, Hagel was right next to them when it happened.

“It reminded me of me and my brother when I was young on the ice,” he says. “Just some brotherly love. It kind of shocked me a little bit. I thought maybe it was a pregame ritual or something, I wasn’t too sure.”

That night was a game against the Florida Panthers, and legendary coach Joel Quenneville’s first return to the United Center since being fired last season. Hagel was again scratched, but took in the pregame ceremony.

“I hadn’t played yet,” Hagel says. “But I was already experiencing some pretty cool things in the NHL.”

A month later, back with Rockford, Hagel had just finished a game against the Texas Stars on Feb. 28 when he was told he was getting called up again. Chicago booked him a flight the next day to meet the team in Florida.

“It was a bright and early flight,” he says. “Got off the plane, went to the rink, was there like three hours before everyone else. I had a Mr. Subb that they ordered for me. Had that, hung out by myself. It was an injury thing again, they weren’t too sure if I’d play. I waited again, didn’t go out for warm-ups.”

When the team got off the ice, Hagel was told he wouldn’t be needed.

“I pretty much put back on my dress clothes, got back on the plane, and was back by 10:30 that night,” he says. “I probably could have caught the third period before I got into bed.”

Finally on March 9, Hagel got the call again. He joined the Blackhawks for a practice day. “I still wasn’t too sure,” Hagel said. “But I got to the rink and I looked at the lineup on the board, and I was in the lineup. I wasn’t going to text everybody I knew, ‘Hey, I’m playing.'”

But by the time he got on the ice, coach Jeremy Colliton told him this time it would be for real. The Blackhawks informed Hagel’s parents, who flew in from Edmonton and arrived just in time for the game.

Hagel felt terrific after his first NHL game. He got dinner with his parents afterward. His future in the sport — which he was questioning as recently as two years ago — finally felt bright again. And then the next afternoon, the NHL shut down its season.

Hagel returned to Alberta, with his routine disrupted but his head held high. By June was able to reserve some private ice with Blackhawks rookie Kirby Dach to resume practicing. Then he got a call from Bowman: He’d be back with the Blackhawks once the season restarted.

Hagel grew up a Capitals fan — he says he idolized Alex Ovechkin — but most of his family and friends back home root for the Oilers. So it adds an extra layer that the Blackhawks are playing against Edmonton in the qualification round, and the games will be hosted in Edmonton.

Besides knowing Dach, Hagel is friendly with Alex Nylander, who was also once with the Sabres organization. Hagel said in each of his four call-ups this season, his teammates were welcoming and he felt even more comfortable being around them.

Hagel — as usual — isn’t sure whether he’ll get in the Blackhawks’ lineup when play resumes. But if he does, he’ll be ready. And he’s motivated to keep his NHL trajectory moving upward.

“I want to prove everyone in Buffalo wrong,” he says. “And I’m not going back.”