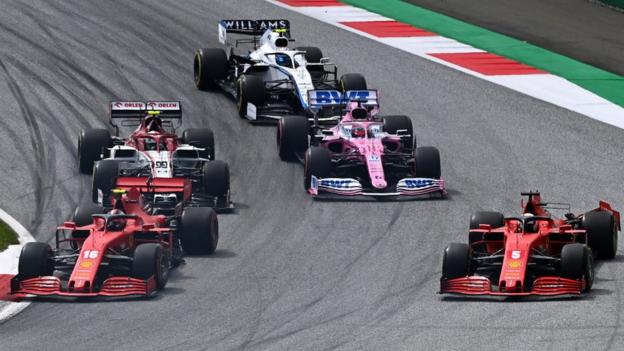 Ferrari have “a long road ahead” as they attempt to rediscover their competitiveness, according to Formula 1 managing director Ross Brawn.

Ferrari have qualified in the lower reaches of the top 10 at the opening two races and the car is around a second a lap slower than the Mercedes.

Brawn said: “They aren’t going to turn it around overnight.”

The 65-year-old was Ferrari’s technical director when they dominated F1 in the early 2000s with Michael Schumacher.

Brawn, writing in his column for F1 after Sunday’s Styrian Grand Prix in Austria, added: “There’s a long road ahead of them. They need to find out if there is a fundamental problem with the car – and they need to find out fast – because clearly they are some way off the pace.

“The management have to cope with it and make sure the staff maintain the faith and stay focused on what needs to be done.

“One of the biggest problems for Ferrari is that, of all the teams on the grid, they come under the closest scrutiny from the media, particularly in Italy.

“I know from my own experience that the media pressure in Italy can be incredibly intense, and you have to make sure it doesn’t get to your people.”

Ferrari cancelled their post-race news conference on Sunday after their drivers collided on the first lap, taking both out of the race.

Charles Leclerc, rewarded with a new five-year contract over the winter after a stellar debut season for the team in 2019, took the blame for an over-optimistic overtaking attempt on Sebastian Vettel at Turn Three, saying: “I am disappointed in myself. I’m sorry but being sorry is not enough.

“I’ve let the team down after them working a whole week to bring the updates early. Too eager to gain those places in the first lap. I will learn from it.”

Ferrari brought forward some upgrades for the Styrian Grand Prix weekend, after their poor performance in the opening race of the season in the Austrian GP at the same Red Bull Ring track.

But team boss Mattia Binotto admitted that the new parts – a new front wing and floor – “didn’t show their worth on track”.

He added: “It has been an entire disappointing weekend and [the crash] is the worst conclusion of a bad weekend for us.”

Further updates are scheduled to be introduced at this weekend’s Hungarian Grand Prix.

The change comes after a series of rule clarifications on engine technicalities over the winter, and a private settlement between Ferrari and governing body the FIA.

Ferrari’s rivals had demanded to know the contents of the settlement but the Italian team say it would reveal their intellectual property.