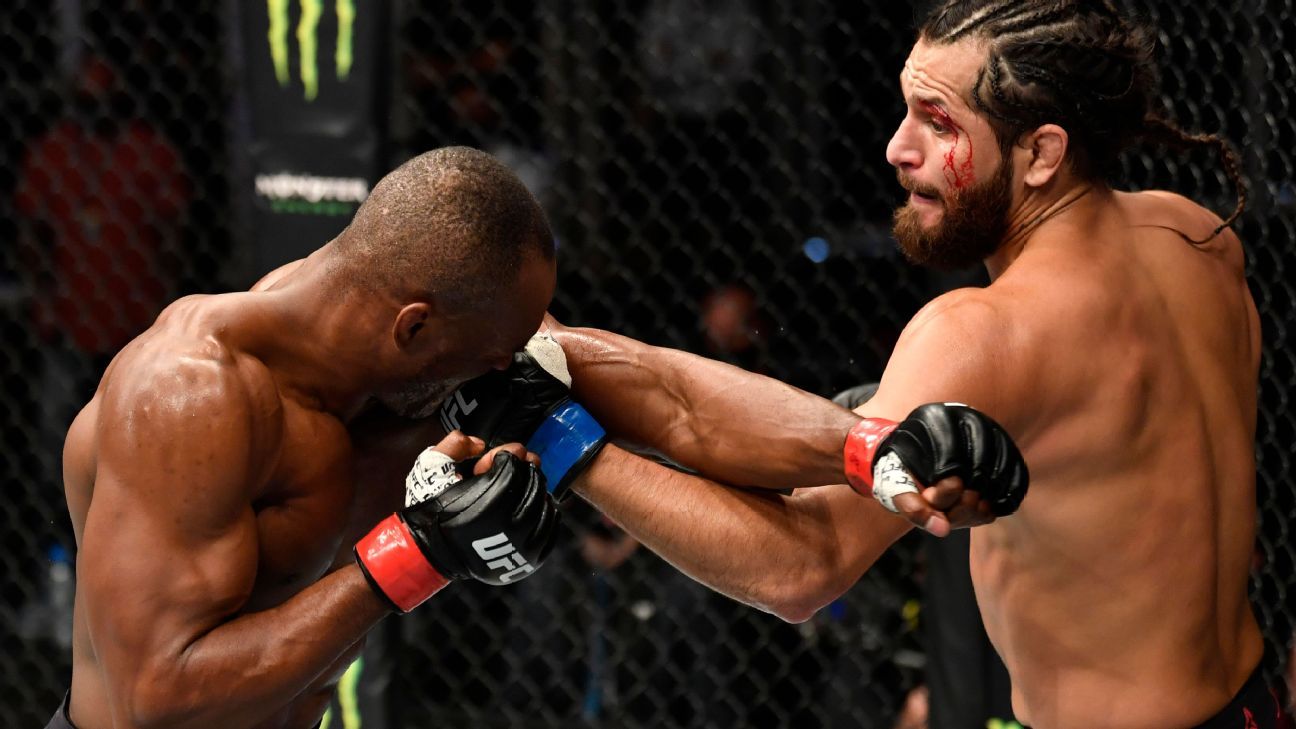 Jorge Masvidal‘s journey to Fight Island started much the same way his fighting career did: in a South Florida backyard.

On July 4, Masvidal attended a barbecue at the Miami home of his longtime manager Malki Kawa of First Round Management. Gilbert Burns, who had been scheduled to challenge welterweight champ Kamaru Usman in the UFC 251 main event, was ruled out the night before because of a positive COVID-19 test. When Masvidal arrived at the Independence Day party, he asked Kawa what the chances were he’d be fighting Usman one week later.

“There’s no shot of this happening,” Kawa told Masvidal.

The UFC returns to Fight Island with a rare Wednesday night card. The main event features two surging featherweights as Calvin Kattar faces Dan Ige. Kattar (21-4) has won three of his past four fights, while Ige (14-2) has won six straight.

How Masvidal got from that point to fighting on Yas Island in Abu Dhabi for his first world title exactly one week later is a story of perseverance, personality and even a slice of pizza.

Kawa and UFC executive vice president and chief business officer Hunter Campbell spoke on the evening of July 3, but they couldn’t get a deal done. The problem was the same as when talks broke down between Masvidal and the UFC less than two months earlier: money.

The original plan for the UFC 251 main event on July 11 was Usman vs. Masvidal. UFC president Dana White said during Super Bowl week it was going to happen, and the hype train gained momentum when Usman and Masvidal had a minor verbal altercation in front of the media assembled that week for the game.

But Masvidal wanted a greater percentage of the pay-per-view revenue than the UFC was willing to offer, Kawa said. As negotiations broke down, Masvidal took to social media to rip the UFC’s pay structure.

It seemed the UFC’s hottest fighter of 2019 would miss out on his title shot when White announced on June 9 that Burns would be challenging Usman.

Then it seemed there would be no welterweight title fight at all when Burns tested positive. After that news broke on July 3, Usman didn’t get on the UFC’s charter to Abu Dhabi because he didn’t think he had a fight. Instead, Usman flew to Dallas to see his parents and to start eating again after cutting weight during camp.

Even with the main event of the Fight Island debut in jeopardy, and time running out, the UFC was not budging while negotiating with Masvidal’s camp on July 3.

But when Masvidal got to Kawa’s home on July 4 and the manager saw how badly Masvidal wanted the fight, Kawa figured he’d give it one last try. So he phoned Campbell.

Over the course of 10 phone calls in two hours, the two sides made some headway. Kawa said Masvidal — who describes knockouts as “baptizing” his opponents — took the phone at one point and thawed the icy negotiations. Campbell made a comment about how it’s usually the Ivy League-educated numbers people calculating how much the UFC pay-per-views would do. Masvidal told him he was an “Ivy League-educated assassin specializing in baptisms, and if you want to see one July 11, we’ll get this done.” Everyone laughed.

There was one other issue: no one could find paper around the house on which to write down the numbers. The entire deal from Masvidal’s side was written on napkins and paper towels.

Jorge Masvidal says he had only a bite of pizza in Rome as he cuts down to 170 pounds for UFC 251.

By the evening of July 4 — about eight hours after the first call — the UFC and Masvidal came to an agreement that satisfied both sides.

The fight was on.

“That was the craziest thing,” Kawa said. “I told Jorge when you win this belt, I’m going to frame it with the napkins and put it up in the office.”

There were still obstacles though. Masvidal had to fly from Miami to Las Vegas, where he would be tested for COVID-19 and then be quarantined before leaving for Abu Dhabi. The Kawas, including Malki’s brother Abe, secured a private jet for each leg of the trip.

Masvidal passed his coronavirus tests in Las Vegas, but his longtime head coach, Mike Brown, did not. Masvidal had to forge ahead without him.

“It was just devastating news when I found out that Mike Brown was not going to be in my corner,” Masvidal said at the UFC 251 media day. “But the show must go on, and Mike will be there in spirit.”

Masvidal boarded the private flight to Abu Dhabi at about 11:30 a.m. local time on July 6. The plane stopped to fuel up in Bangor, Maine, and was supposed to make another stop in London. Instead, Masvidal asked the pilot to reroute to Rome — he wanted to eat some pizza. Never mind that he weighed 192 pounds two days earlier and had to be 170 pounds at weigh-ins in four days. But Masvidal said on SportsCenter that he resisted temptation and took just one bite.

From there, it was fairly smooth. Masvidal landed in Abu Dhabi, quarantined for 48 hours and his COVID-19 tests came back negative. The weight cut was “tough,” but Masvidal made it.

Brown wasn’t just there in spirit. Abe Kawa called the coach via FaceTime while he was in Masvidal’s corner, so Brown could watch the fight from home and dictate instructions.

“I didn’t have the pop to give Mike what he wanted, but he was giving great advice,” Masvidal said.

After the fight, Masvidal sat at the podium at the Flash Forum and sighed. After knocking out three top fighters — Darren Till, Ben Askren and Nate Diaz — in a star-making 2019, Masvidal’s winning streak was over.

Masvidal had come out of the gate firing, landing hard kicks to Usman’s legs and body. For a few minutes it looked like Masvidal would be able to take the fight to Usman and put him in trouble. But it didn’t last. Masvidal’s cardio faltered, and Usman used a grinding style, pushing Masvidal up against the fence throughout the next four rounds en route to a unanimous decision.

“I just feel like I let a lot of people down,” Masvidal said at the news conference. “It was a s—ty performance.”

Masvidal said his body wasn’t really reacting, beginning in the second round. The lack of a training camp and the steep weight cut obviously played a role, though Usman is undefeated in 12 UFC fights and considered one of the best fighters on the planet for a reason. Usman was the “better man,” Masvidal said.

After apologizing to his supporters, Masvidal started the long journey back to South Florida. On the flight, he broke out the brand of mezcal in which he invests.

“I’m not gonna disappear from the sport without this belt being wrapped around my waist, one way or another,” Masvidal said. “It wasn’t my best performance tonight, but everybody could see I have a dog in me. That dog doesn’t shut up or roll over for nobody.”