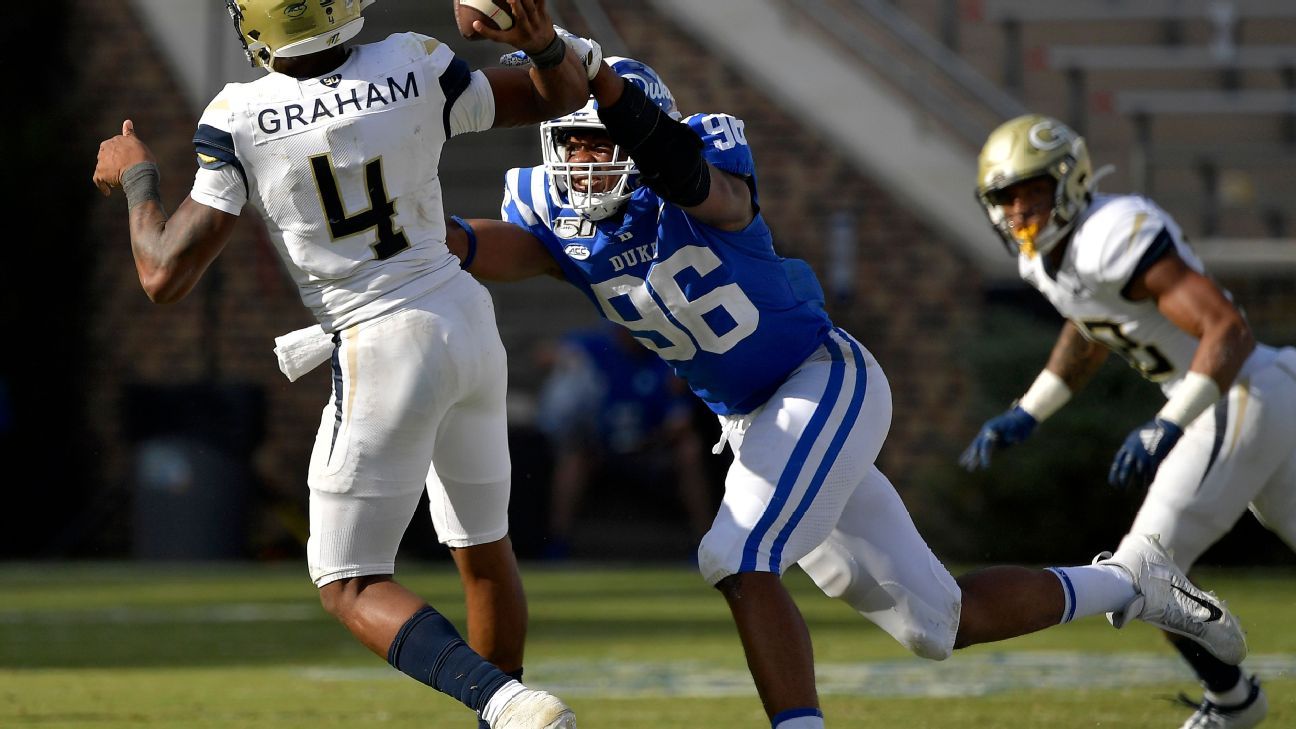 The knock on Chris Rumph II has always been his size. He’s slim for an edge rusher. That’s what kept him out of the spotlight on the recruiting trail, and it has meant Duke has been a bit outside the box with his use on the defensive line the past few years. So it’s no surprise Rumph’s goal for the offseason was to bulk up and get stronger.

“Herschel Walker didn’t have a whole weight room,” Rumph said in May, “but he did pushups and situps like a madman, so that’s what I’m doing.”

The routine is simple. Rumph gets up, does 20 or so pushups, then goes on about his day, dropping every so often to do 20 more. How many does that end up being by the end of the day?

That’s not to say he isn’t counting. His position coach, Ben Albert, is trying to get in shape this offseason, too. He had knee and back surgery the past few years, so he’s finally feeling good enough to get out and exercise, but by the time he gets out of bed and flicks through his phone messages, there’s certain to be a note from Rumph and linemate Drew Jordan already waiting in his inbox with workout stats for the morning.

Sure, it’s been an unconventional offseason, but it’s also a crucial one for Duke’s defensive line, and Rumph in particular.

Rumph’s numbers last season are eye-popping. Despite limited playing time, Rumph racked up 6.5 sacks and 13.5 tackles for loss to go with 11 quarterback hurries, three pass breakups and a forced fumble. He pressured the QB on a whopping 22.1% of his pass rushes, the second-highest mark in the country, well ahead of Ohio State’s Chase Young. His run stuff rate of 6.2% put him among the top 15 in the country, and he had just four missed tackles on the season. Overall, he had 24 tackles at or behind the line of scrimmage, all while being on the field for less than half of Duke’s defensive snaps. Pro Football Focus graded him as the ACC’s best returning edge rusher.

“We wanted to put him in situations where we thought he could have success,” said Albert, the Blue Devils’ co-defensive coordinator who developed a scheme to put Rumph and fellow ends Jordan and Victor Dimukeje on the field at the same time. “The playing time was a byproduct of us trying to find the right fit where he could excel and do the type of things that he’d be really good at.”

Which still gets back to the primary concern, Rumph’s size.

Rumph’s father, Chris Jr., starred at South Carolina and now coaches outside linebackers for the NFL’s Houston Texans, but the son didn’t take up the sport until his junior year in high school. Before that, he was a baseball star.

“We’ve only got Chris Rumph because he couldn’t handle the curveball,” Albert said jokingly.

The late start meant few options on the recruiting trail, and at just 195 pounds, even Duke — a staunchly developmental program — was concerned. Those concerns vanished within the first three plays when Albert showed up to see Rumph play in his school’s spring scrimmage.

“On the first play, they ran right at him, and he had a TFL,” Albert recalled. “The second, he tipped a pass. The third, he got a sack. He showed he had the ability to play physical.”

Since arriving at Duke, Rumph has added more than 30 pounds, but at 6-foot-3, 225 pounds, he’s still undersized for the average edge rusher. He allowed 3.1 yards per tackle on first down last season, which ranked him 203rd among linemen and linebackers with at least 20 attempts. That has translated to more of a specialty role alongside Jordan and Dimukeje, which has provided the Blue Devils with an often-dominant defensive front.

Still, Rumph has bigger goals for 2020. He has always been fast, but adding the power to his game could turn him into a potential first-round pick, a playmaking force up front.

The goal, Rumph said, is for Duke’s defense to rack up 40 sacks this season. He’s already planning on contributing at least half that total.

That type of performance would certainly put Rumph among the elite pass-rushers in college football, but Albert thinks there’s still much room for growth. He wants to line up Rumph inside, put him on the tight end in the 6-technique, have him play with his hand in the dirt. If Rumph keeps developing this way, there’s genuinely no limit to what he can be, Albert said.

“He has innate speed, uses his hands very well, and he’s a lot stronger than you think,” Albert said. “I have no reservations about Chris being able to play at the next level and do so very well.”

If Rumph gets his 20 sacks this season, he’ll be a household name. But he’s not alone on the precipice of something special. Here’s a rundown of some other breakout candidates around the country.