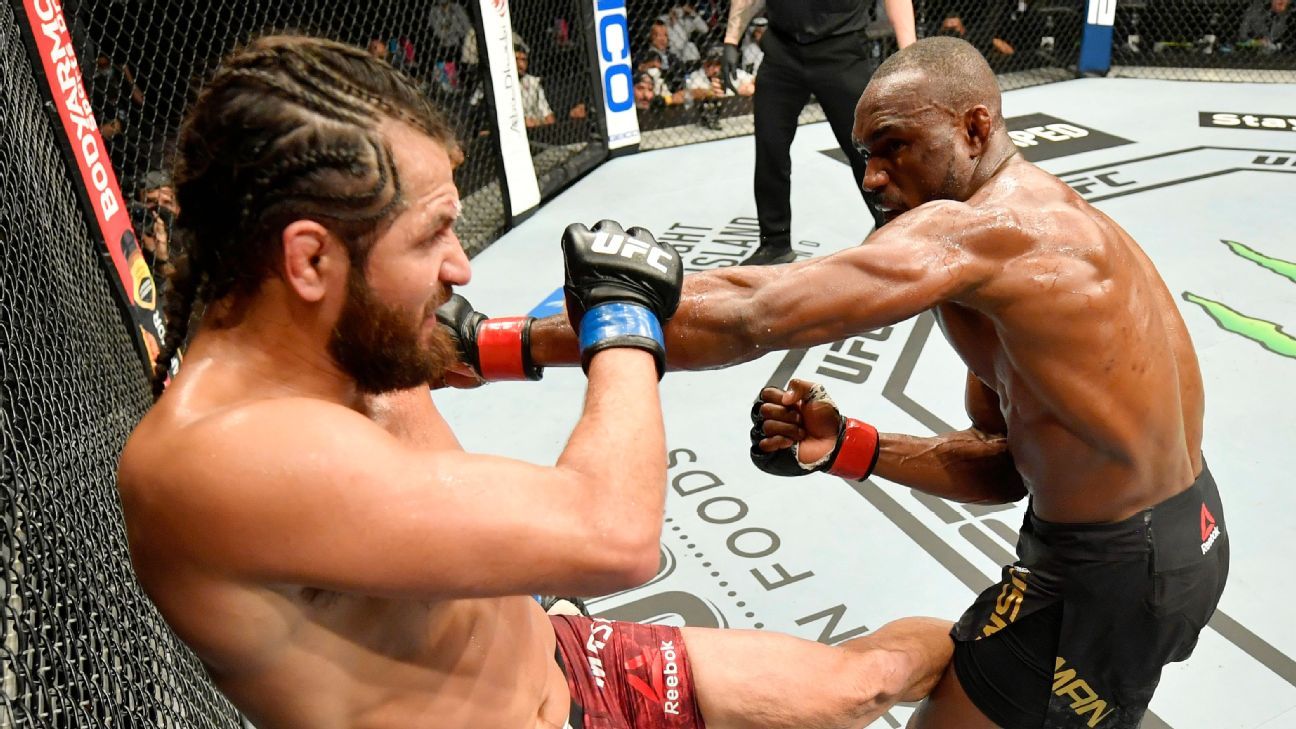 Kamaru Usman dominated Jorge Masvidal in the main event of UFC 251 on Fight Island, showcasing his power and wrestling against one of the UFC’s most explosive fighters.

Alexander Volkanovski didn’t have as easy a time against Max Holloway, but he also walked out of the Octagon with the title still in his possession, and Petr Yan took down a legend in Jose Aldo to begin his reign as UFC bantamweight champion.

UFC 251 was filled with big moments for established stars and rising prospects. Brett Okamoto looks at the most notable contenders of Sunday’s event in Abu Dhabi, United Arab Emirates, and predicts who will step into the Octagon against them next.

Who should be next: Gilbert Burns

So we got the fight we wanted in Usman vs. Masvidal. Coming into 2020, that was always the welterweight fight to make, and I’ll speak for the entire sport when I say we’re glad we got it. But you know, Usman vs. Burns was also a pretty fire matchup, before a positive coronavirus test from Burns earlier this month.

The teammate angle — Usman and Burns trained together from 2012 to 2020 — still works. And, lest we forget, Burns deserves it. He is 4-0 since moving to 170 pounds, and absolutely dominated former champ Tyron Woodley in May.

If for any reason Burns is unable to go next, Edwards should (and I think would) get the call. Like Burns, he’s deserving of the shot. In fact, it was actually Edwards who was supposed to fight Woodley earlier this year, not Burns. Had that fight stayed together, we’re looking at an entirely different welterweight picture.

But as deserving as Edwards is, I don’t see him jumping Burns in line, unless some outside factor comes into play.

Who should be next: Nate Diaz

Masvidal wants to fight Diaz again. He knows Diaz did him a solid in 2019, when Diaz called him out for a “BMF” title fight. That really helped put Masvidal over the edge. Yes, knocking out Darren Till and Ben Askren turned him into a star overnight — after he’d put in years of work without the same recognition — but Diaz putting Masvidal’s name in his mouth pushed it over the top.

Masvidal can’t offer Diaz a shot at the welterweight title, but he can offer him a rematch of a fight he lost, and if you know Diaz, you know that’s something he wants. I’m all for it.

We had a teammate vs. teammate angle in Usman vs. Gilbert Burns, and as fun as that would have been — and still could be — those two like each other. Masvidal and Covington do not.

The beef is real between these two. Now, perhaps Covington could finally face Tyron Woodley next, another bout that has been years in the making, but frankly, I prefer this one over that by quite a wide margin. The Diaz fight is still far more likely to me, but this is a great option, too.

Who should be next: Winner of Brian Ortega vs. Chan Sung Jung

Ortega vs. Korean Zombie isn’t booked yet, but it would be great to see the UFC finally, officially add this fight to its schedule. The two were supposed to fight in December, but Ortega was forced to pull out due to an injury.

Ortega hasn’t won a fight since March 2018, but he’s still sitting at No. 3 on the UFC’s rankings and if he were to beat Jung in a high-profile bout — especially impressively — there would be interest in him fighting for the title again. The only loss of his career is to Holloway, and even though that fight wasn’t close, Ortega has made significant changes to his training since.

Jung is simply on fire. Two first-round knockouts in 2019, and he’s one of the most entertaining (and talented) featherweights in the division.

Also a fight that’s not booked, and also a fight the UFC has tried to book previously. Many would say these two are the future of the 145-pound division. Magomedsharipov in particular the UFC would have an easy time promoting as a phenom if he were to get past Rodriguez and book a title fight.

Who should be next: Donald Cerrone at lightweight

I have a feeling many are going to respond to this with the idea that it’s way too hard of a fight for Cerrone right now. And you know what, they might be right. But I will offer this: Holloway would need time to bulk up and make a true run at 155, which at this point I think is the move.

Why stay at 145 now? He’s just lost to the champ, twice. He’s had trouble with the cut in the past. Let him make a real move to lightweight. 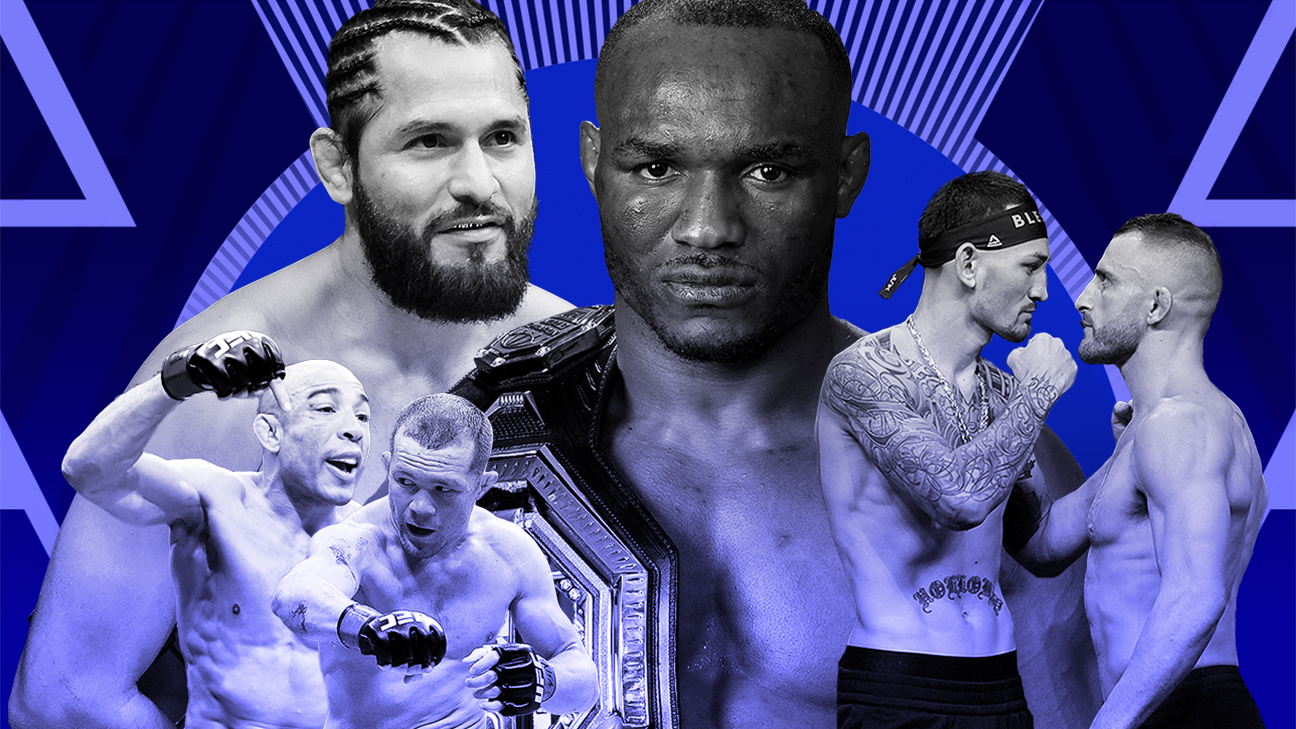 If the pay-per-view is purchased, all fights from UFC 251: Usman vs. Masvidal will be available to watch on ESPN+.

Watch the complete card on ESPN+

Cerrone is pretty big for the division. I don’t know if he even wants to cut back to 155, but if he does, this would be a fight to do it for. Yes, Cerrone has lost four in a row, but all of them have been to top competition.

Holloway has now lost three of his past four and frankly, it’d be an opportunity for Holloway to get back on track against an opponent with a very big name — which he kind of needs now.

Even though Holloway has lost three of four, he’s an immediate player at 155 pounds. He doesn’t need to fight the 15th-ranked guy in the division and move up from there. Give him a name in the top six or seven of the division and see how he fares. Some of those names are currently locked up, or likely waiting to see how some things shake out.

Felder is free for a fight that makes sense, and this one would.

Who should be next: Aljamain Sterling

This is a no-brainer. Sterling earned the title shot by submitting Cory Sandhagen last month in Las Vegas — good for his fifth win in a row. It’s a fascinating style matchup between the two.

I believe Yan will be a much different champion than Henry Cejudo was looking to be. Whereas Cejudo was pretty clear about wanting the biggest names, Yan wants his legacy to be one the hardcore fans will appreciate. Fight the No. 1 contenders and prove beyond any doubt he is the best bantamweight in the world. I am all about this fight with Sterling. And hey, if Yan goes through enough contenders, perhaps Cejudo will come out of retirement someday to challenge him.

There is NOTHING to THINK about @danawhite! I am the next guy in line! I earned my shot and it’s time for me to realize a dream! Cut the games! #UFC251

These two were supposed to fight in June, before Yan was pulled from that matchup and paired with Aldo (whom, by the way, Moraes beat by split decision in his most recent fight). A fight between Yan and Moraes made sense then and it would make sense now, but I don’t see it — and frankly, neither does Moraes. He told me last week he’s plotting his next move with the understanding Sterling is next.

But if for some strange reason that fight didn’t happen, Moraes is the next one who deserves it most.

Who should be next: Dominick Cruz

The initial feeling is, “Aldo is done.” Right? That’s the first thought. He has only won three of his past nine fights. He’s lost championship fights at 135 and 145 pounds. He’s been stopped multiple times. Where does one go from here? That’s the initial reaction.

But then I think about it more. I mean, he did just go eight competitive rounds with Marlon Moraes and Petr Yan. There aren’t many fighters out there who could say that. And his other recent losses at 145 pounds were to Max Holloway, one of the best featherweights of all time, and Alex Volkanovski, the featherweight champ. I’m not writing Aldo’s eulogy yet. Give him a relevant fight and see what he does with it.

Aldo vs. Cruz is legend vs. legend. I love it. I actually badly want to see it.

If it’s not Cruz, then how about the man who has referred to himself as perhaps Cruz 2.0? Another unorthodox, lanky bantamweight, who is also highly ranked. Sandhagen would be favored to win this fight, I believe, but I doubt by a wide margin.

Who should be next: Winner of Zhang Weili vs. Joanna Jedrzejczyk

Coming in, I thought if Namajunas won, she should get the next crack at defending champion Zhang Weili. And in a way, I still think that … I’m just willing to wait for it.

Namajunas won on Saturday, but it wasn’t the kind of performance that really leads to a title shot. The result itself was a split decision, and she left the Octagon looking worse for wear than her opponent. Now that said, I was highly impressed with Namajunas. Andrade hits like a truck and it’s hard to go into any fight against Andrade and emerge unscathed.

I don’t think there was anything wrong with Namajunas’ win, but personally, I’m down to see the rematch between what is, so far, the 2020 Fight of the Year in Zhang and Jedrzejczyk next. And figure out a way to get Namajunas in attendance at that fight. Say she’s next from the jump.

And if Jedrzejczyk happens to win, I think that’s OK. Even if that does mean Namajunas will fight her for a third time, already up 2-0 in that rivalry.

Of course, the UFC might disagree and book Zhang vs. Namajunas right away, and that would also be just fine. When Namajunas is on and flowing, as she was in the first two rounds against Andrade, she’s darn near unbeatable.

Who should be next: Tecia Torres

Four fights into her UFC career, the 26-year-old Ribas has looked nothing short of outstanding. The UFC has done a great job of matchmaking her, and she’s done her part with solid wins and energetic, memorable interviews. She’s on her way to stardom.

Now that said, there’s still no need to rush her — and I don’t think the UFC will. The strawweight division is actually pretty deep, and there’s plenty of time to let Ribas grow and work her way up. Torres is a household name and she’s coming off a very impressive win of her own last month in Las Vegas.

Torres is definitely a step up in competition for Ribas, but she’s outside of the top 10. A victory over her would be a nice feather in the cap of Ribas. They both have ties to American Top Team, but nevertheless, this makes sense.

This might be rushing Ribas a little, but only from the standpoint that a win would really propel her into a ranking where she’d probably have to take a very difficult fight right after.

From a competitive standpoint, I believe Ribas could hold her own against Waterson or Hill right now. Hill has been one of the hottest strawweights in the division over the past year, and Waterson is a staple at 115 pounds. A fight like this would quickly thrust Ribas into a spotlight there’s no turning back from, but maybe she is ready.