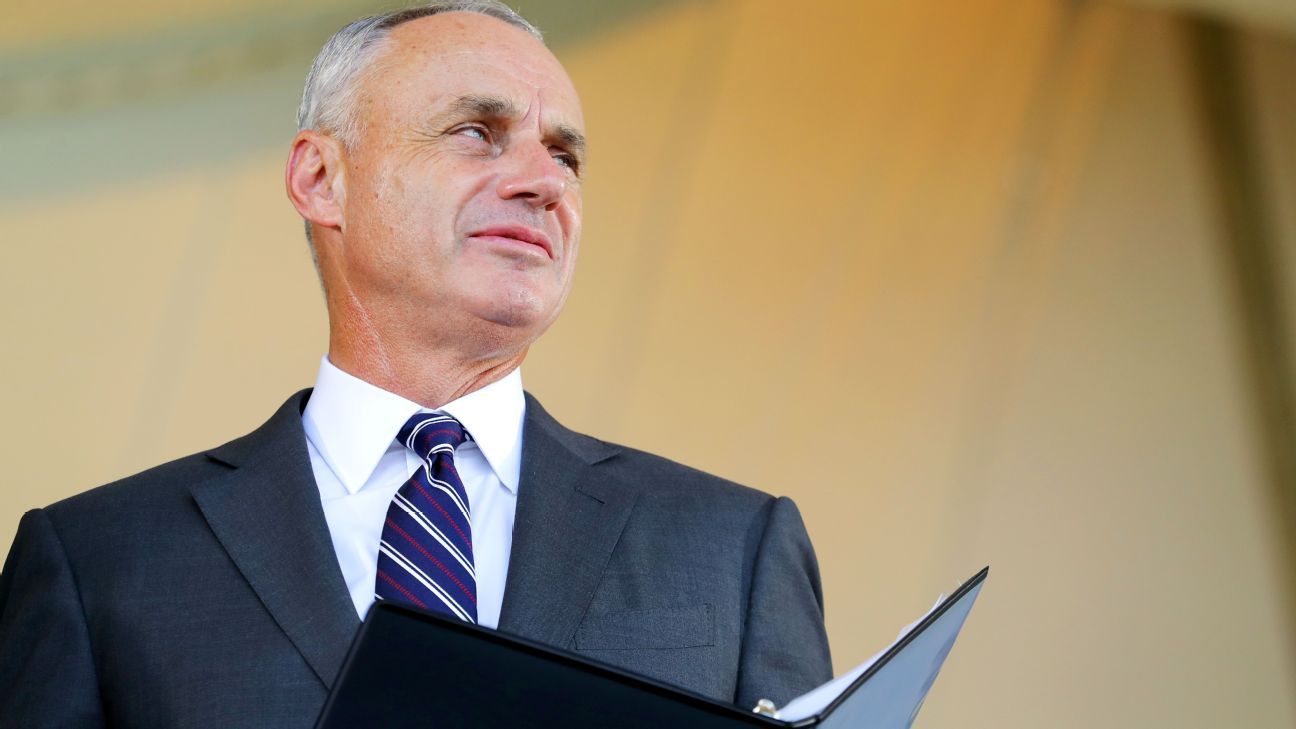 There is a beachhead of hope and a mountain of uncertainty among teams these days as they attempt to play baseball amid the surge of coronavirus infections around the country. After the sport’s first waves of testing results, just about everybody in the game has no more than one degree of separation from COVID-19 as players and staffers are sidelined, with some having contracted the virus after joining their teams for the second training camp.

Some teams and players have been able to maintain full focus on baseball, but as the Nationals’ Sean Doolittle explained the other day, being in baseball is emotionally exhausting right now — and that’s largely because of the unknowns. Unknowns, about the efficiency of the health and safety protocol, about the available volume of testing, about whether all teammates will diligently do everything possible to protect their peers.

In the face of such anxiety, it would behoove the leaders in the sport, commissioner Rob Manfred and union chief Tony Clark, to hold regular briefings for reporters. Every day, or every other day, they should provide the needed facts, address some of the challenges of the moment, and provide a fuller context of the difficulty of what baseball is trying to execute.

From a battle of Big Apple aces to a showdown of superstar shortstops and beyond, here are ESPN.com’s rankings for each position ahead of the 2020 season. Buster Olney (ESPN+)

• Top 10 teams: The big boys have some competition (ESPN+)

Along the way, they would also have the platform to discuss social injustice and participate in the conversation that has evolved since the killing of George Floyd, while calling upon players to discuss some of baseball’s intended initiatives in that area.

I live in New York; in March, Gov. Andrew Cuomo began giving daily news conferences, just as Rudy Giuliani did as mayor of New York City in the days after 9/11. Regardless of the respective political persuasion of constituents, it was an important effort. Cuomo provided updated numbers, some awful, some reflecting hope for change, and then identified problems and explained what was being done to address those problems. Some governors in other states, such as Mike DeWine of Ohio, have done the same to convey the information needed.

Manfred and Clark could do the same thing together. Look, the labor talks leading up to baseball’s restart were just awful, and the relationship between MLB and the players’ association is at its most toxic and unproductive in a quarter of a century. But in the effort to get on the field, the sides are theoretically united; MLB and the union agreed to the health and safety protocol attempted daily. They need to be working together to make this work, and Manfred and Clark could make joint appearances to answer questions, some of which would address current concerns of players and staffers.

Manfred and Clark could provide the numbers that folks in the game desperately need as they make their personal decisions — as well as the numbers that baseball, out of an ethical obligation, should consistently provide to the municipal, state and federal regulators who are forming coronavirus-related mandates in the U.S. and Canada.

Pulling off a baseball season under the current circumstances is going to be unbelievably difficult, perhaps impossible, and there’s no reason to gloss over that reality. Everybody gets it — folks around the country, and the players and staffers. In South Korea, where the KBO is in the middle of its season, the total number of coronavirus cases since this crisis began is reportedly under 14,000, and in the U.S., there were 68,000 new cases on Friday alone.

MLB has experienced some of that volume firsthand: On Saturday, the Yankees got word that closer Aroldis Chapman tested positive, and manager Aaron Boone told reporters that Chapman has some symptoms and is out indefinitely.

It would be helpful to everyone if Clark and Manfred regularly spoke to the evolving situation. Last Monday, the Nationals did not receive testing results in the manner laid out under the health and safety protocol, and general manager Mike Rizzo — believing it was his responsibility to keep the players safe — canceled a workout and issued a blunt statement about the need to fix problems. As the Washington Post was first to report, MLB officials were upset by Rizzo’s statement.

But rather than reacting to Rizzo’s handling of this unprecedented matter, it would have been a lot more productive use of energy for Manfred to get on a Zoom call with reporters to acknowledge any mistakes that had been made, explain what happened with the Nationals’ testing, and describe what measures are being taken to fix the problem. Rather, MLB issued a statement, with the words ascribed to no one in particular.

Day to day, Manfred and Clark may not have the needed information to provide fully detailed answers to some questions — but at least it would become clear that they are aware of potential problems, something that players and staffers wonder about. At least it would be clear that the leaders of baseball are at the helm and part of the action, doing everything possible to keep the effort to play in 2020 alive.

The 2020 MLB season is nearly upon us, so here’s a look at the Opening Day schedule, previews, picks and more. Story &»

In that vacuum, the information has been disparate, with some teams releasing more than others — mirroring the state-to-state response.

There needs to be one standard for how this is handled, and managers and general managers really need to be able to say that some questions are better left for Manfred and Clark, who have the most power to affect change, to continue this effort or shut it down.

Clark has rightly worked to protect the players’ individual privacy rights. But he and Manfred really need to constantly acknowledge the importance of dispensing the overall testing numbers, for the sake of players, staffers and communities.

In the absence of facts, in the absence of apparent leadership, the anxiety and fear — and conspiracy theories, about some teams handling the health and safety protocol differently than others — will blossom. The folks under the MLB umbrella and the fans need to hear from Manfred and Clark regularly.

Elsewhere around the major leagues

• Underneath the recurring conversation about whether baseball is viable in 2020, some players are at work and opening eyes.

One is the Mariners’ Kyle Lewis, who is showing exceptional power in Seattle’s summer camp. With the nature of his swing, he looks like a right-handed-hitting Joey Votto.

Yoshi Tsutsugo has looked better and more comfortable in summer camp than he did in the first spring training for the Rays. “He’s been crushing balls over the place,” one staffer said.

The Red Sox love what they’ve seen from Jonathan Lucroy, who continues to look better as he moves further away from his neck surgery. Adam Eaton and Trea Turner have stepped into the Nationals’ camp and rolled. The Dodgers’ Corey Seager has looked spectacular, hitting seven doubles in intrasquad games, including five on blistering line drives.

Yu Chang, a right-handed-hitting infielder who played in 28 games for the Indians last year, clubbed a home run just a few rows short of the distant scoreboard in Progressive Field last week, and he homered in back-to-back-to-back intrasquad games the last few days. He is likely to be part of the Indians’ 30-man group if and when games are played.

Think about all that has been going on in the life of Gerrit Cole since Game 7 of last year’s World Series. High-profile free agency, culminating with a record-setting contract; the revelation about the Astros’ 2017 sign-stealing, about which Cole had to answer questions because he was with Houston in 2018 and 2019; the shutdown of baseball; the birth of the first child for him and his wife, Amy. Through all of that, he has maintained a spectacular degree of preparation, and when he threw in his first intrasquad action the other day, he looked like he was ready to start another Game 7 of the World Series.

• As catcher J.T. Realmuto told reporters the other day, he and the Phillies had opened talks about a contract extension when baseball was shut down, and there does not appear to be any current momentum toward a deal. All sense of market pricing has been jumbled because it’s not fully apparent how baseball’s financial landscape will change, for this summer — or for next year, or 2022.

Some executives and agents acknowledge that what is really needed to determine pricing is a round of free agency. It’s as if baseball has been transported back to the fall of 1976, when the first group of players moved into open bidding — and out of that emerged the first 10-year contract, for pitcher Wayne Garland, and the market-shifting deal of superstar slugger Reggie Jackson, who signed a five-year, $3.5 million deal with the Yankees. The value of any asset is what someone is willing to pay for it, and in those first years of free-agent auctions, the perceived value of players moved dramatically.

ESPN’s Buster Olney leads the discussion of the latest news and notes around baseball with the game’s top analysts. Listen

It’s hard to know exactly how big of a financial hit each of the 30 teams has taken through this season without packed ballparks, and how much that will affect player salaries moving forward. If a team were to step out and aggressively sign a player now, it would run the risk of overpaying, because the prices might drop this winter.

When the best free agents hit the open market in the upcoming offseason — Mookie Betts, Realmuto, George Springer — then the bidding will begin, and teams and agents will start to get a sense of where the pricing will be.

• The Mets have been the middleweight of New York and the Yankees always the heavyweight because of the dollars spent by the respective teams. The Mets have occasionally landed big personnel punches, like the trades for Mike Piazza and Johan Santana, but for the most part, the Yankees have fostered larger payrolls and landed the greater stars, from CC Sabathia to Gerrit Cole.

But with new ownership taking over the Mets, whether it’s Alex Rodriguez and Jennifer Lopez or the billionaire generally regarded as the favorite, Steve Cohen, the franchise’s standing is about to change — something that will be good for the team, and for Major League Baseball, just as it was good for MLB when the Dodgers were bought by the Guggenheim group. Since that happened, the full power of the Dodgers’ franchise has manifested. The team dramatically spent more, to make more, and went back to being one of the sport’s signature franchises.

Under the next leadership group, the same thing could happen for the Mets. Nobody would be surprised if the next owner bid heavily on a Betts, or maybe Francisco Lindor in fall 2021, to shift the team’s trajectory.

• On Friday’s Baseball Tonight podcast, Boog Sciambi and I talked about the possible change in Mets ownership and what it would mean for their fans, who are often tortured by their own abiding loyalty to the team. In describing them, I mentioned the phrase that I think best fits them: ’til death do us part.