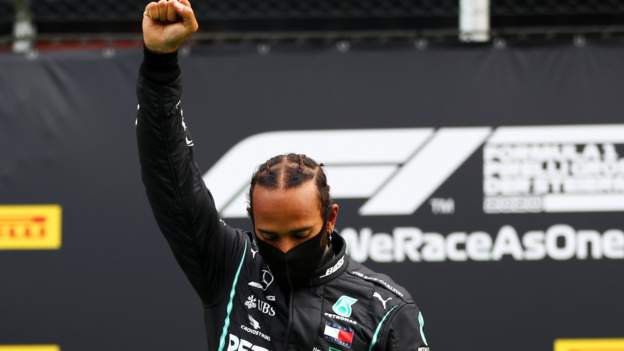 Lewis Hamilton says he expects to be fighting racism all his life and urged Formula 1 to do more to promote the sport’s message of equality.

The world champion said he had to convince some of his fellow drivers to stage another demonstration against racism before the Styrian Grand Prix.

He said: “Some people asked: ‘How long do we have to continue to do this?’ Some felt one last week was enough.

“I had to encourage them: ‘We have to continue to push for equality.'”

Hamilton twice gave the raised-fist, black power salute after winning the race, as he climbed out of his car and standing on the podium.

The gesture rose to fame when US sprinters Tommy Smith and John Carlos deployed it as the American national anthem played when they collected their medals at the 1968 Olympics.

The drivers did demonstrate their support for anti-racism and equality before Sunday’s race, just as they had at the Austrian Grand Prix the week before, but not all of them were present this time.

The majority of those who attended the ceremony took the knee alongside Hamilton, using a gesture that has become associated with support for anti-racism and opposition to police brutality.

And all the drivers who were there wore T-shirts saying: ‘End Racism’, while Hamilton’s said: ‘Black Lives Matter.’

The drivers insist they all stand against racism and Hamilton said he believed the fact not all drivers were at the protest was down to circumstance.

Hamilton said: “After the drivers’ briefing (on Friday), we had this debate of whether we were going to do it again.

“I said: ‘Look, racism is going to be here longer than our time here and people of colour who are subject to racism don’t have time to take a moment to protest and that be it.’

“There were some who were like: ‘I already did it last week, I’m not doing it again.’ There were some that continued to have the same approach as the first week. And that’s why I tried to spend a little more one-on-one time with those who had chosen to stand and just have a chat.

“From the drivers’ point of view, we are going to become closer. I am not saying everyone is going to be taking a knee but as we talk about this more often and I like to think we’ll all be together understanding take a knee.

“But because we planned it, it wasn’t in the FIA schedule, it was all a rush. We were supposed to be there at 15 minutes to, I was there at 10 to. There were guys coming from much further back (on the grid) and we just got on with it.

“Some did try to get there but it was too late. Moving forward, maybe next week we will try to do a better job if we are to do the same thing. But it’s not my choice.”

Hamilton paid tribute to his Mercedes team-mate Valtteri Bottas and his team for taking the knee alongside him before the race, and said the team would keep the car in its new black, anti-racism, pro-diversity colour scheme all year.

“We are going to be fighting and pushing for it all year and this is going to be a lifelong thing for me,” he said.

F1 has announced its own pro-diversity programme and chairman and chief executive Chase Carey has donated $1m of his own money to it. But Hamilton said more needed to be done.

“We have to think what we can do as a sport,” he said. “Those are nice signs (around the circuit) but action is needed.”

“It is great to see Chase being so kind as to donate $1m and it’s great to see the FIA also stepping up and giving $1m but if you don’t know the problem then you can’t fix it. And $1m doesn’t really go that far.

“So a lot of work has to go on with F1 and the FIA need to be part of it and the drivers need to be a part of it also as we have great voices and platforms.”