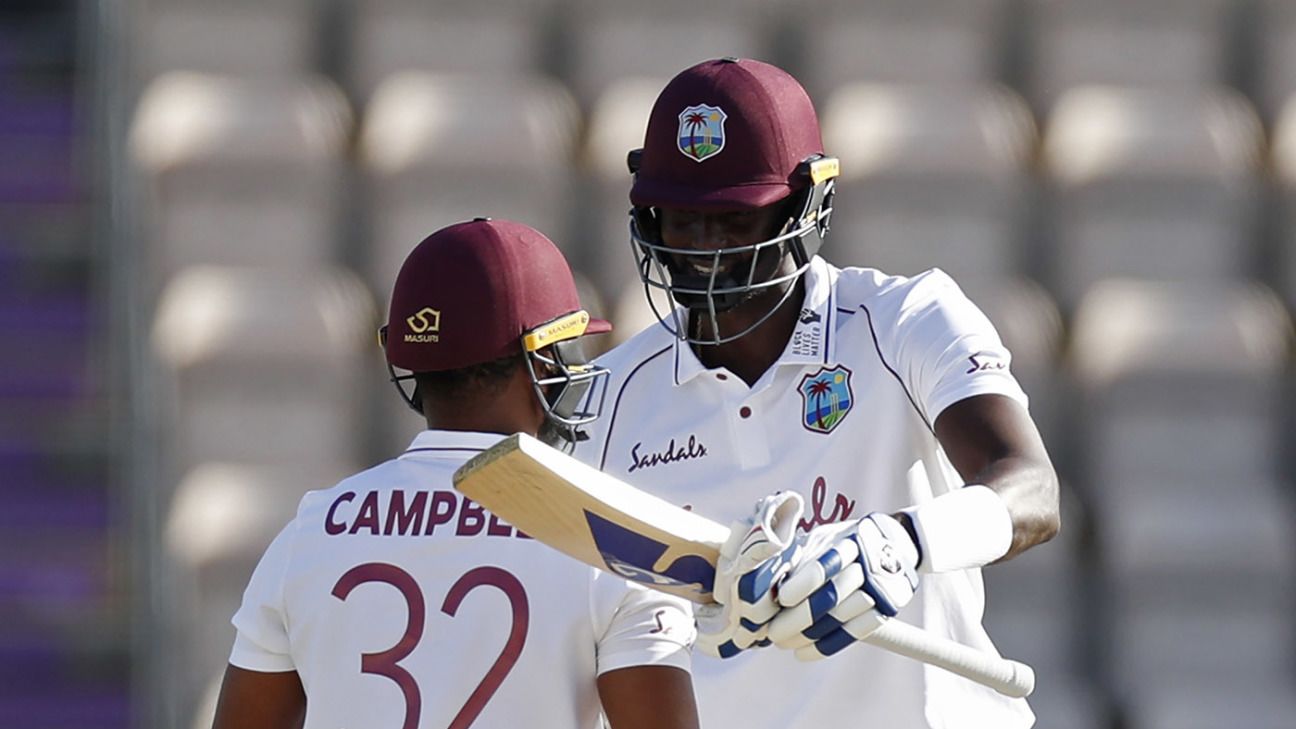 Jason Holder has described the fourth day of the Ageas Bowl Test as “by far the best effort” he had seen from a West Indies team during his time as captain and “one of the best” in his tenure.

West Indies took five wickets at a cost of just 30 runs at the end of a long day in the field, with Holder making the vital breakthrough in dismissing his opposite number Ben Stokes for the second time in the Test before Alzarri Joseph and Man of the Match Shannon Gabriel shared four more.

“It was a long hard toil and a hard-fought day for West Indies, and a day that definitely went in our favour at the back end,” Holder said. “The reason I say that it was the best day for me is down to the fact that every single time I asked for effort from those bowlers, no one said: no, I can’t, I’m too tired. They just all kept running in.

ALSO READ: Blackwood writes history in his own way

“At that stage when Stokesy and Zak [Crawley] were batting, the game started to look a little bit less likely for us to win. We knew we couldn’t lose – we backed ourselves not to lose – but we wanted to win the game, and we knew how important it was for us to win.

“Yesterday’s effort was by far the best effort I’ve seen from this group. And not only the bowlers – the fielders kept running round, getting through the overs, and we all kept our energy up right throughout the day.”

Holder said that once Stokes and Crawley had fallen within an over of each other, he sensed that “something special” was around the corner at a crucial moment in the Test.

“We’ve had so many dark days in the past that we understand moments in the game that we need to seize,” he said. “If we wanted to win the game, we had to break the partnership. I was fortunate to come on and to get Stokesy out, then Alzarri got Zak caught-and-bowled and that was a very sharp chance.

“When those two wickets fell, I knew we were in for something special, but it was just a case of us executing again. Then we got Jos [Buttler] and at the very end we were able to get Dom Bess who was a little bit annoying in the first innings.”

West Indies have a wretched recent record in the first match of series away to major opposition, with their last win in such a fixture coming in Port Elizabeth some 13 years ago. Holder said that record, combined with the absence of England captain Joe Root, meant that he had considered a good start to the series to be “really important”.

“In the past we haven’t started series well and we’ve always had to play catch-up. England missing Root was a big miss [because] he’s a high-quality player. We thought it was an opportunity to really get into their inexperienced batting line-up.

“It’s a massive, massive win. To beat England in England is no easy feat. We were able to do it last time we were here in 2017 so we all know what the feeling is like but things have changed drastically since then. They’re a massive unit in their backyard so to start the series this well is very promising for us and we feel proud about the way we performed.

“This morning I woke up and I just wanted to fast-forward to the end of the day with us winning. At the start there were a few nerves… but we knew once we got a partnership the English bowlers would go flat. Credit to England, they threw a lot at us.”

Holder also praised the 10 reserves on this tour, and suggested that a nets session at the Ageas Bowl before the first Test had been vital preparation. The majority of the reserves impressed in the intra-squad warm-up matches – in particular Joshua Da Silva, who made an unbeaten hundred in the second game – and Holder said they had been crucial to West Indies’ ability to hit the ground running.

“I could have seen it [coming], the way we prepared. Our preparation was spot-on. Before this game we had one of the best nets session I’ve ever had, and it was led by those reserves who ran in and challenged our batters – they got them out quite a few times.

“That sparked something within the group. I can’t ever forget the reserves who have come on this tour. I think a lot of credit has to be given to them for this victory, too.”