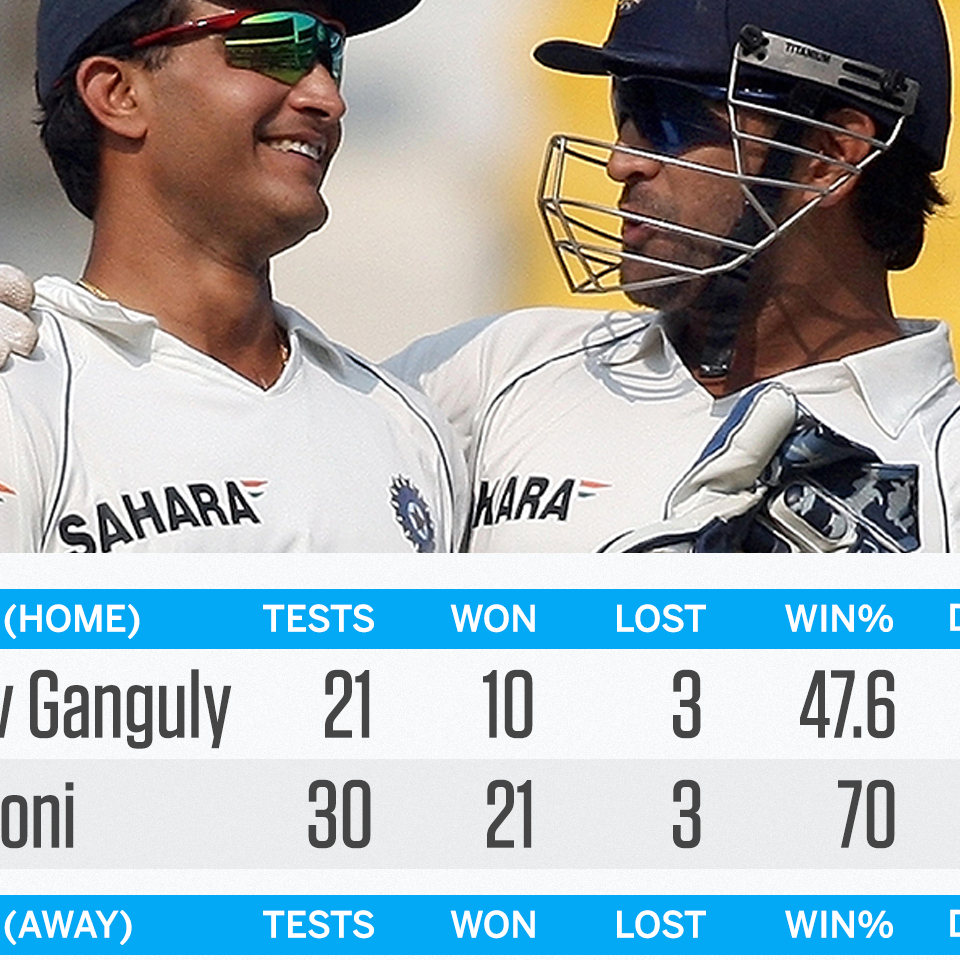 MS Dhoni has marginally edged out Sourav Ganguly as the more impactful captain in a Star Sports survey, in which two of India’s most successful captains were judged across a number parameters developed in collaboration with ESPNcricinfo.

While Dhoni was rated the best ODI and home-Test captain by significant margins, Ganguly was the clear winner in the away-Test captaincy category. Ganguly was also rated the better captain in terms of the team he developed from the players he inherited.

A jury comprising former players, journalists and broadcasters from across the globe scored each player out of ten in eight different categories: red-ball captaincy at home and away, white-ball captaincy, batting record as captain, how they transformed the teams they inherited and the quality of the teams they left behind, their major achievements, and each captain’s overall impact. After totalling up all the scores in each category, Dhoni was the winner by 0.4 points.

The most closely contested categories were batting record as captain, the teams the two left behind, and overall impact, with Dhoni nicking the first category and Ganguly edging him out in the other two.

Among the former players who voted in the poll were former South Africa captain Graeme Smith, former Sri Lanka captain Kumar Sangakkara and former India openers Gautam Gambhir and Kris Srikkanth. Here’s what they have to say on why they voted how they voted.

Tests Home
Survey results Dhoni (8.2) beats Ganguly (7.4)
While both men had strong records, Dhoni had to work a little harder with the personnel he had, and the fact that he did that successfully is apparent in how his teams were rarely beaten.

Srikkanth: In difficult conditions, he started winning Test matches. That’s when India believed we can beat England in England, Australia in Australia and Pakistan in Pakistan. That belief came from Ganguly

Sangakkara: Ganguly did not like losing. You saw his emotions coming out in various stages. But it was not just destructive. It came out because he really hurt when India lost.

Gambhir: The expectations after winning the World Cup… we just couldn’t deliver. If we had gone with an open mind, thinking that even if we lose, the world won’t come to an end, we probably would have given ourselves a better chance. If our first intent had been to go out and win, we just didn’t have that.

Smith: Ganguly brought a hardness and a toughness to Indian cricket. He certainly was a huge pillar in the strength of Indian cricket and where it’s gone to today. And I always felt, even though MS had some success and India had some success, they were always lacking that one element of aggression.

ODI captaincy
Survey results: Dhoni (8.1) beats Ganguly (6.8)
There was only one winner, but also a tantalising what if. What if Ganguly had the quality of limited-overs players that Dhoni did?

Sangakkara: It was about the ability of MS winning those important moments by taking very simple decisions. He had a lot of clarity and a lot of confidence not just in his decision but also in trusting the player to deliver and he left the over-thinking to the opposition. But I think Dada had to work much much harder, with the team that he had, to get into those big moments.

Smith: If Dada had had an MS type player, his team was slightly more developed, I think you would have seen his team win more trophies.

Srikkanth: Ganguly transformed the mindset of the Indian team. Then the fantastic winning combination was given on a platter and said, here Dhoni, you have a fantastic team, just continue what we started.

Smith: People only see what they can see. A lot of work goes behind the scenes as leader and one is identifying players and bringing them through, taking a chance on talent and I think Dada did that really well.

Teams left behind
Survey results: Ganguly (7.8) beats Dhoni (7.6)
This was a tight race. Ganguly gave India more players. He took over the side at a time of transition so a major part of his mandate was to find and blood new talent. Dhoni, though, helped reduce the fear of being dropped, giving those he believed in the time needed to settle in the team and become their best selves. Virat Kohli is a fine example of that. Still, there had to be a winner and a loser.

Batting record as captain
Survey results: Dhoni (7.8) beats Ganguly (7.4)
How do you choose between a breathtaking finisher in ODIs and a Test batsman who began by making Lord’s bow down to him?

Gambhir: In white-ball cricket, MS Dhoni hands down. But in Test cricket, Sourav Ganguly. Because MS Dhoni, away from home or away from the subcontinent, doesn’t even have a hundred. And Sourav Ganguly has got a hundred at Lord’s, in Australia.

Smith: It’s almost impossible to move away from the impact MS Dhoni had on the game, on world cricket. His ability to finish, to handle the pressures in the almost gladiatorial moments in his career will leave an everlasting memory. I agree that when it comes to Tests, you always felt you had an opportunity to work him over, especially away and out of India. When it comes to Test cricket, I’ll have to sit with Dada, but one-day cricket, MS is my man.

Achievements
Survey results: Dhoni (8.5) beats Ganguly (7.2)
There’s only one world champion between the two and he takes the round.

Srikkanth: Come on man, World Cup 2011, the Champions Trophy, wins in Australia, Sri Lanka, of course the T20 World Cup. So as a limited-overs captain, Dhoni had a huge, huge impact both as a captain as well as a player and as a wicketkeeper, don’t forget that.

Gambhir: Purely from the trophies point of view, it’s MS Dhoni. But if you see the impact during those tournaments, MS didn’t have such a big impact as a player. But in the 2003 World Cup, Sourav Ganguly had a fabulous World Cup. If you see the 2007 T20 World Cup, MS didn’t score too many runs and neither did he score too many runs in 2011 as well. But yes, as a leader when you talk about winning trophies, yes MS Dhoni. He’s won both the World Cups, T20 and 2011, and the Champions Trophy. Sourav hasn’t won anything apart from the Natwest Trophy. [India were also joint winners of the 2002 Champions Trophy under Ganguly after the final was washed out on two consecutive days].

Overall impact
Survey results Ganguly (8.1) beats Dhoni (7.9)
Another tight race, with one man claiming trophies and climing to the top of the ICC rankings and the other gifting India players of immense quality and, most importantly, the belief that they can win, even against the best

Smith: Sourav made such a big impact in Indian cricket in terms of the talent he brought, the mentality he brought… I think that like Allan Border probably did in the early days of Australian cricket, setting them up for the success, I think you’ve got to look for Dada here and say what he did for Indian cricket was iconic. He did the hard yards and all these wonderful players and captains followed.